AMD has officially launched their first FirePro graphics cards based on their latest Fiji GPU architecture, the Fire Pro S9300 X2. The graphics card which is aimed at high-performance compute will be based on not just one but two Fiji cores that will allow the card to show its potential in focused market segments such as Machine / AI Learning, Bio-IT, Oil and Gas, Finance and Astronomy. The FirePro S9300 X2 is the highest performance, single precision card that is available to the HPC sector. 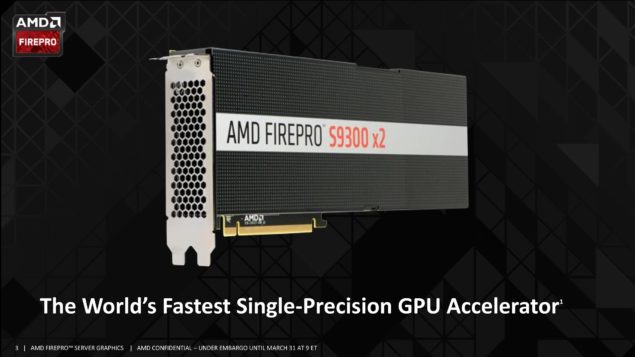 The AMD FirePro S9300 X2 is a beefy graphics card aimed at HPC market. It is based on the same Fiji GPUs that are found on the Fury series cards and the recently announced Radeon Pro Duo. Knowing that it uses two GPUs, it will share most of its DNA with the Pro Duo than any other graphics cards. The technical specifications of the card are very close to the Radeon Pro Duo.

Both graphics cards are based on the Fiji graphics card which uses the 28nm process technology and houses 8.9 billion transistors under its hood. The Fiji graphics core features 4096 stream processors so we are looking at a total 8192 stream processors on the FirePro S9300 X2. The graphics card comes with maximum core frequency of 850 MHz which results in 13.9 TFLOPs of single precision compute performance. Since Fiji is deprived of the dual precision hardware, it has just 0.8 TFLOPs of FP64 compute but this card is solely aimed at single precision tasks in the HPC sector.

NVIDIA has aimed at single precision applications in the HPC market with their Tesla M60 and various other Maxwell based Tesla solutions that launched last year. These solutions allow NVIDIA to utilize their Maxwell architecture which comes with good enough FP32 performance to deliver faster graphics acceleration in the server market.

Both Maxwell and Fiji weren't equipped with the necessary compute hardware to deliver an increased FP64 performance over their Kepler and Hawaii counterparts which still server as great FP64 cards. The Tesla K80 and the FirePro S9170 provide a decent performance in that market. The FP64 graphics update from AMD and NVIDIA is expected to launch with the upcoming Pascal and Vega series of cards.

Coming back to the FirePro S9300 X2, the card comes with first gen HBM memory with 4 GB VRAM stacked on each chip. Both cards have HBM clocked at 1 Gbps which allows 1 TB/s bandwidth. The card is passive cooled and has a TDP rated at 300W.

One might ask why is there a huge difference in the performance parameters of the dual Fiji cards. The reason is that the Radeon Pro Duo is aimed at a more enthusiast market and has higher clocks, vastly higher power input requirements and comes with beefy cooling (Liquid Cooling) to achieve its 16 TFLOPs number. The S9300 X2 is a HPC oriented card that comes in a passive form factor, has vastly lower power consumption and has clocks set at a more acceptable range to operate 24/7 for HPC workloads. Hence the 13.9 TFLOPs number is fairly decent for the card. 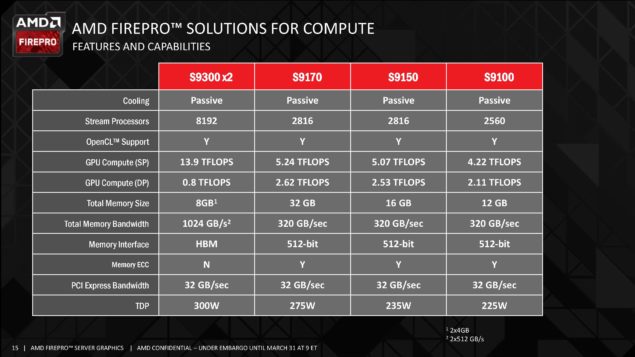 The other main difference is that the FirePro S9300 X2 will be available in Q2 2016 with a price of $5999 US. The Radeon Pro Duo also launches this quarter with a price of $1499 US. The overall solution is vastly superior to NVIDIA's current offerings in the FP32 market but with the GTC 2016 approaching, NVIDIA is expected to unveil their Pascal architecture aimed at the HPC market which will feature HBM2 memory and the next gen CUDA architecture to leverage their already dominant lead in the HPC graphics accelerator race. NVIDIA's GTC conference begins on April 5th.