A recent presentation of the AMD and SK Hynix co-developed 3D stacked High Bandwidth Memory standard HBM has made its way to the web. This new leak gives us a very good idea of what to expect from the new technology in terms of performance and market availability.

HBM was originally developed in tandem by both SK Hynix and AMD to replace GDDR5 as the new standard for bandwidth hungry processors such as GPUs.  GDDR5 performance scaling has slowed down dramatically and grown exponentially more expensive in the last few years. Faster GDDR5 modules and wider memory interfaces were only going to take us so far, a new standard had to replace the aging technology.

HBM will allegedly make its way to AMD's next generation code named Pirate Islands GPU starting next year. With the introduction of AMD's upcoming flagship GPU code named Fiji. Which is rumored to be the first GPU in the industry to feature this brand new memory technology.

HBM represents the revolutionary step that has been so badly needed in the evolution of memory standards. The first generation of HBM promises to deliver 4.5X the bandwidth of GDDR5 and a staggering 16 times the bandwidth of DDR3. 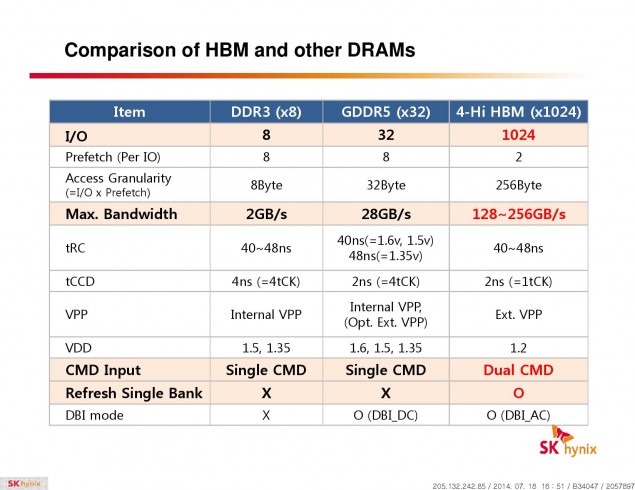 Note that single channel DDR3 controllers normally have 32bit wide I/O. Leading to 8GB/s bandwidth. But that number is still eclipsed by the 128 GB/s figure for first generation HBM.

The second generation promises to double the bandwidth by doubling the speed from 1Gbps to 2Gbps. While also quadrupling the memory capacity for 4-Hi stacks from 1GB to 4GB. 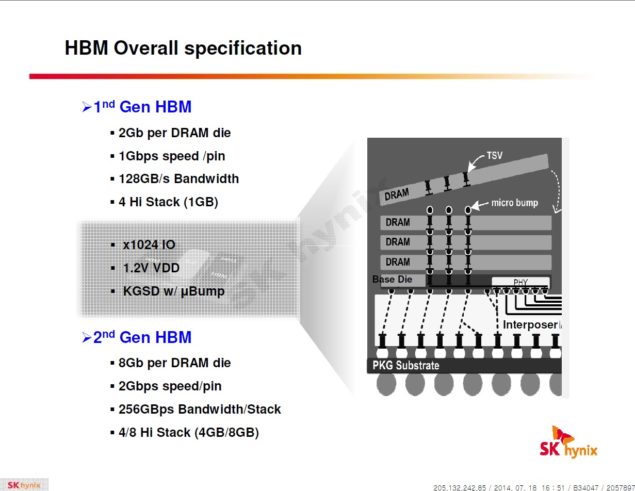 AMD and SK Hynix will continue to scale this technology well into the mid 2020s. In terms of performance, capacity and power efficiency. Availability of HBM memory to SK Hynix and its partners begins as of now Q4 2014.
HBM will not only make its way to next generation GPUs but also APUs. You can check our detailed coverage of the technology here. 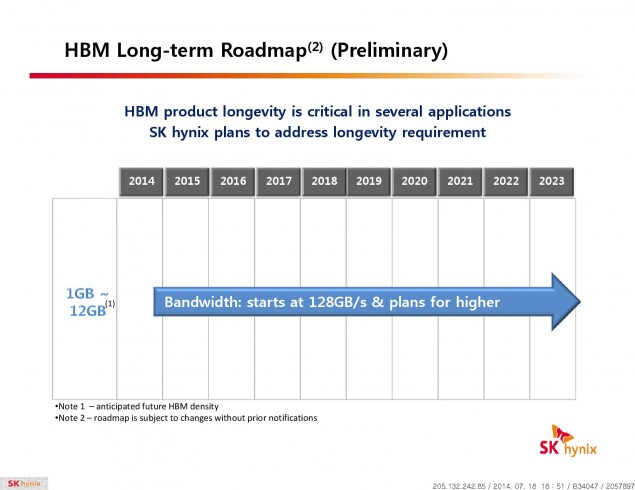 The first graphics products to feature HBM are allegedly going to be AMD's Pirate Island R 300 series GPUs in 2015.  In addition to all the new architectural improvements coming with the Pirate Islands graphics architecture. The Rx 300 series is expected to be the first to feature TSMC's 20nm manufacturing technology a full shrink from the current 28nm technology. And also be the first to be equipped with HBM. TSMC's 20nm technology allows AMD to drastically reduce power consumption and heat as as well as drive clock speeds up. HBM also adds a healthy doze of power efficiency to the equation by reducing active power of the memory system to nearly half that of GDDR5. 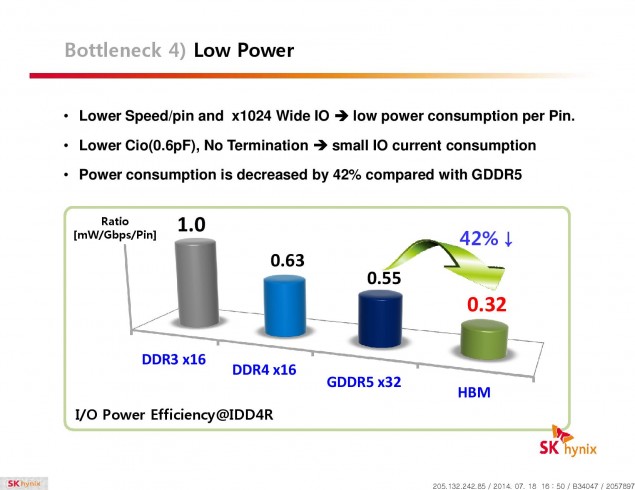 Nvidia will be using 3D stacked memory on its GPUs starting with Pascal in 2016, a full year after AMD. Volta was Nvidia's scheduled GPU for 2015 that was supposed to use the Hybrid Memory Cube or HMC for short which was s 3D stacked memory technology competing with HBM. However after HMC's development fell behind the roadmap it put a lot of pressure on Nvidia to look for an alternative technology, which they did. What's painfully ironic however is that Nvidia ended up using the AMD and SK Hynix co-developed HBM with Pascal. Which the company confirmed earlier this year. Nvidia very rarely uses a technology developed by their competition if ever.

AMD bet on HBM early on, while Nvidia bet on the competing HMC standard. It seems AMD bet on the right technology and they stand to gain an entire year's worth of exclusive access to the technology. Nvidia will simply have to make due with GDDR5 for 2015.

The full presentation can be found below.