AMD's price cuts have been hitting the professional spectrum recently and these slides show that AMD is driving home the value of their GPUs in particular. The criteria of performance per dollar is what they are targeting and as shown, they are leading in most of the areas. The margins between the red and green part are pretty significant and in one case, AMD leads by almost double. 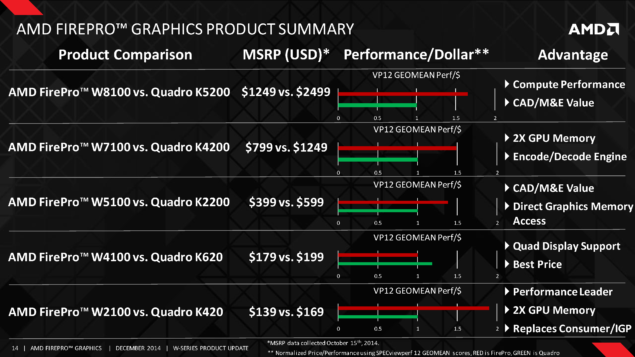 A comparison of different market segments of the professional markets @AMD

As the keen eyed reader will observer, there is one very important factor that has not been listed here: performance per watt per dollar. In other words, the running cost. Basically any HPC cluster has two major cost events: the sunk cost, which is the cost incurred at the time of creation and the running/operating cost, which in most cases is the electricity consumed. If the size of the cluster is small and electricity costs in that area are not high then the builder will almost certainly focus on sunk cost. If the size of the cluster is huge and/or electricity costs are too high then the builder will tend to side with power efficiency. Ofcourse if money is no issue or electricity is free (there are some rare cases where this has happened) then the builder will focus on performance alone.

Keep in mind that AMD has only counted the newest generation of Quadro GPUs so most of these are rocking the Maxwell GM107 core. The highest end spectrum, which consists of the Quadro 5200 and FirePro W8100, sees AMD leading by about 50%. The lowest end spectrum, which consists of the FirePro W2100 and Quadro K420, sees AMD leading by around 90%. The middle end spectrum consists of the FirePro W5100 and Quadro K2200, sees Red leading by 33.3%. Infact the only market segment in which AMD is not in the lead is the upper tier of the low end spectrum (which is usually referred to as entry level in the mainstream consumer market). AMD's FirePro GPUs (specifically the S9150) have also recently landed the no.1 spot in the Green500 list, so basically AMD powers the world's most efficient supercomputer. As far as cost events of HPC clusters go,It does look like AMD has both sides of the coin covered doesn't it?

#AMD pro gpus are turning quite a few heads in the HPC sector, green500 and performance per dollar leader. http://t.co/vz0ezAs2t7