AMD Closes At New Record High – Is This The Most Overvalued Chip Stock On The Market? 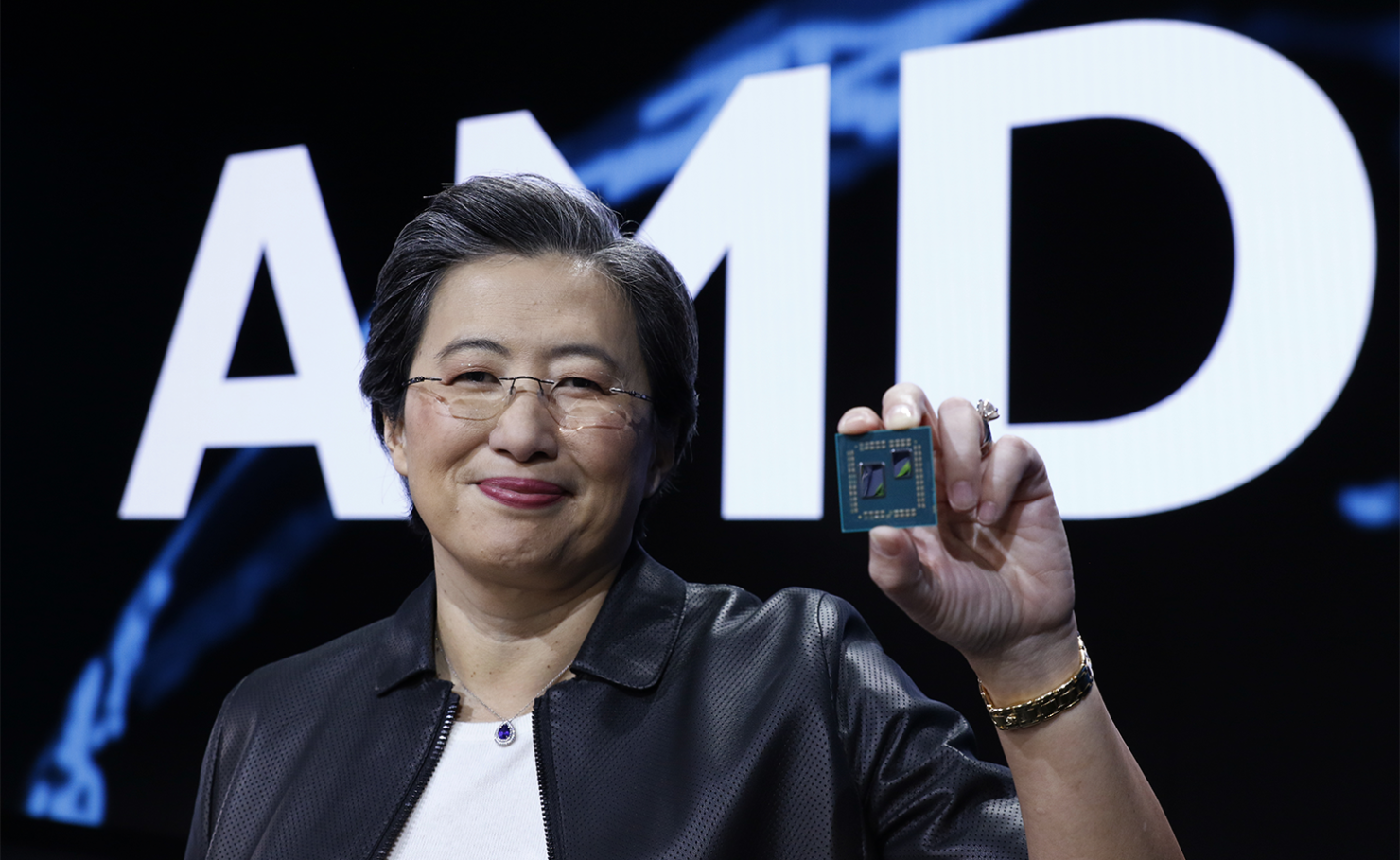 Update: We're glad to see this piece is generating some good discussion and we'd like to offer some clarifications on methodology and numbers used.

Please head over here for my follow up piece.

As one reader pointed out, two numbers needed to be changed.

Shares of Advanced Micro Devices (NASDAQ:AMD) rose another two percent today to close at $50.93 - the company's highest stock price since going public in 1972.

AMD has been the semiconductor industry’s most volatile stock dating back to around 2016 when shares were trading at less than $2 per share. Since then the company, led by CEO Dr. Lisa Su, has seen its stock price make history by soaring over 2,500% in less than four years, good for the biggest gain of any major technology company during that time period.

There is a compelling story surrounding AMD, one that certainly warrants an extensive look at the build-up to the firm's turnaround beginning way back when Rory Read was steering the ship in 2014.

However, today we are going to take a look at the fundamentals to attempt to either prove or disprove the notion that AMD is overvalued at its current asking price.

It's easy to look at a historical price graph, like the one below, and arrive at the conclusion that AMD might be overvalued. It has skyrocketed in value over the last few years and its done particularly well in the past few months, rising 75% since last October. 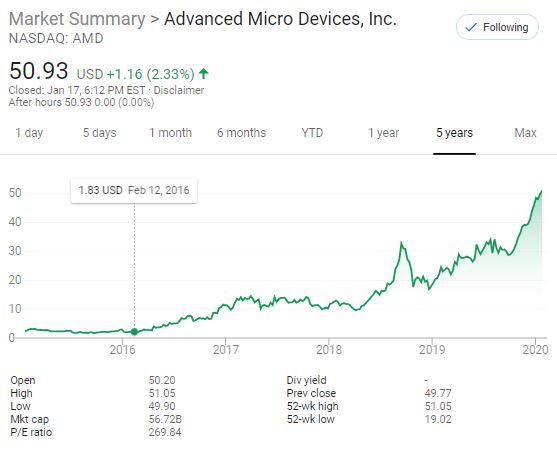 AMD reported a Non-GAAP earnings per share (its total profit divided by the amount of shares it has outstanding) of $0.19 for the third quarter 2019. As of its third quarter earnings, AMD is trading at a price to earnings of 268x.

This is what's known as the P:E ratio and its a quick and dirty way to look at a company's stock price relative to what actually matters most - its bottom line profit. Simply put, 268x is extremely high for the semiconductor industry and I'll show you what I mean. I've cobbled together some of the larger chip stocks trailing 12-month (LTM = last twelve months) P:E ratios and I've thrown in Google and Apple to represent the ultra-large cap tech companies as well just for added context:

Now, this chart is a bit more striking than AMD's stock price chart. AMD is trading at multiples of what its industry peers are valued at but, of course, the story of AMD isn't sold as one of the past, but rather one of the future. No one will argue (at least in good faith) that the company doesn't have some major growth drivers in its near future.

What would AMD need to do in order to justify its current stock price in 2020?

First, it's important to realize that AMD is truly in a unique position, that of having a minority market share in every segment that it competes in yet in many ways it has (or soon will have) a dominant product stack due to Intel's production woes on 10nm. Again, that's an entire narrative that is very much worth exploring but outside the scope of this article.

Readers of this would be better served by heading over to checkout Usman's piece on a related subject today in regards to Intel's supply woes. Intel over-allocated to mobile SoCs and is thus supply-constrained and what I am talking about here also takes into consideration a lacking competitive product stack from Intel given that 10nm was supposed to have arrived last year and now may not arrive on desktops and inside servers until much later this year or possibly never at all. Its likely Intel may roll its top-to-bottom product refreshes into its 2021 7nm family of products but that isn't decided.

In other words, Intel can't supply 14nm chips in sufficient quantities this year AND 10nm(7nm) products won't show up till 2021. In short, the floodgates are open for AMD to gobble up market share. Of course, this is exactly why AMD is trading at such inflated levels but that is enough about Intel -  it should suffice to say we are expecting real growth for AMD. The major question is, just how much growth will it take?

We're going to make a few assumptions and the objective here is to make them as realistic as possible. If we exclude AMD (because including their P:E would grossly increase the average) and take the average P:E of NVIDIA (NASDAQ:NVDA), Intel (NASDAQ:INTC), Qualcomm, TSMC, and Broadcomm we arrive at an average P:E of 35. I'm going to throw AMD a bone here and increase this to 45 P:E as a target since AMD will be in a growth phase for many years even if all goes according to its plan in 2020.

How much money, i.e. market share, would AMD need to attain in order to support $50 per share?

Taking AMD's market cap of $57 billion and dividing by 45 we arrive at $1.27 billion in earnings. That is the total value of earnings AMD would need to show in order to be more or less in-line with the semiconductor industry. Remember, I bumped the average of our sample group from 35 up to 45. Using 35 as a P:E would give us $1.63 billion earnings.

We can make a few further assumptions starting with gross margin, I expect AMD to fully make good on its goal of increasing gross margins to 45% so let's just go ahead and use this as our future value for the coming quarters.

Next, while AMD's business is somewhat seasonal due to the holiday shopping period and video game consoles, let's use a flat growth model to average future quarters revenue. The question is: just what growth rate is reasonable? Here is AMD's current outlook for the fourth quarter of 2019:

AMD’s outlook statements are based on current expectations. The following statements are forward-looking, and actual results could differ materially depending on market conditions and the factors set forth under “Cautionary Statement” below.

If AMD makes good on its $2.1 billion forecast for Q4, it would be the highest single quarter of revenue ever for the firm. Even so, that's not quite enough to justify our current stock price so let's keep going. AMD believes it will see a 17% rate of growth in top-line revenue, and since we have concrete proof that it achieved 18% in the previous quarter let's go ahead and use 15% quarterly growth as our base assumption.

The above chart is meant to help visualize how impressive 15% growth every quarter actually is.

If we use the forecasted $2.1B revenue as a jumping-off point we can arrive at the end of this year: $3.673 billion - a whopping 57% total increase Y/Y. It seems rather lofty but remember, Q4 2019 is forecasted to see a 48% increase compared to a year prior according to AMD's own guidance so this isn't exactly unprecedented.

Here's my other gift to AMD (besides increasing semiconductor average P:E)... I am going to assume that it will be able to pull off the amazing feat of seeing its costs increase only by 15% while growing its business by over 50%. Increasing expenses like R&D and marketing by 15%, we'd expect operating income in the fourth quarter of 2020 to be at $1.03 billion. Using the same non-GAAP cost structure we can back that out to about $929 million in earnings. Short of the $1.27 billion in earnings we needed to be inline with AMD's peers.

AMD has about 1.117 billion shares outstanding using non-GAAP accounting. Doing the math this works out to an EPS of 78 cents.

I truly believe that AMD can actually achieve these numbers as the company currently has a 15% share in laptop chips, a 7% slice of the $60 billion server CPU market, and its desktop market share is somewhere below 25% and of course, don't forget - AMD is the exclusive supplier for the chips powering this year's highly anticipated next-generation Xbox and PlayStation 5.

We've given AMD a very generous aggressive rate of growth, and an even more generous assumption when it comes to costs that are required to run and develop the business. And it seems that yes, AMD may very well be overvalued at its current share price. Despite potentially increasing its business by over half and keeping cost increases to a minimum, I predict that its price to earnings ratio doesn't drop below 65 in the fourth quarter which is still simply too high after such a big improvement to the bottom line.

Of course, there are several caveats to this. AMD could simply knock it out of the park, claim a third of the server market, half the laptop market, and two-thirds of the desktop market and easily double the results I displayed here today. However, this won't happen in 2020. OEM design cycles, especially in the enterprise space are quite lengthy, for instance. It very possibly could, given an extension towards the end of 2022, but of course, that is outside the scope of this article.

Taking a step back and let me be clear about AMD: they are poised for some serious growth and I believe this company could be valued at $150 billion in five years or less. I just think that right now nearly $51 per share is overvalued versus realistic expectations. Again, the company will do extremely well, but buyers of AMD stock at this level may be purchasing at the top (for the time being).

AMD expects to report its fourth-quarter and full-year results for 2019 on Tuesday, January 28th. Wall Street expects a minimum EPS of 28 cents, a 40% improvement over its non-GAAP EPS of 18 cents.

As always we will have same-day coverage of AMD's earnings results here at Wccftech!