AMD is yet to launch their Kaveri APUs which arrive in January 2014 and we are already hearing the first details of their next generation Carrizo APU. This isn't the first time we are hearing of Carrizo, many details of the APU have already been revealed and AMD's latest roadmap seems to confirm whatever we have heard except just one thing. 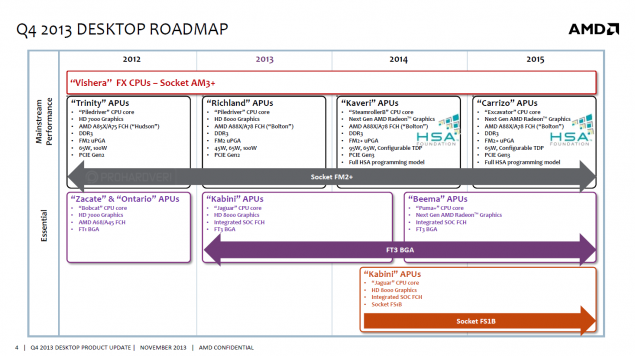 The AMD Carrizo APU will replace the Kaveri APU when it launches in 2015. From the updated roadmap, it is confirmed that Carrizo APUs would be equipped with the high-performance Excavator core which pushes the performance to the next level with its x86 modular core design. The Excavator core would be limited to AMD APUs and possibly their Opteron enterprise processors. As far as AMD's FX CPU's are concerned, we don't see them happening now with the Steamroller architecture and we think this trend will continue since AMD seems to have abandoned the high-performance processors for consumers.

AMD's GCN architecture would be featured inside the Carrizo APU and we are talking next gen here. The GCN die implemented on the Carrizo APU would support DirectX 11.2, TrueAudio, Mantle, OpenGL 4.3. Performance will be boosted over Kaveri APU which currently runs Battlefield 4 on 1080P resolution without any discrete GPU. The more efficient architecture would also mean that the TDP of the top level SKUs would be configured just around 65W.

The Carrizo APU would remain loyal to AMD's FM2+ socketed motherboards which are currently available for sale from various manufacturer's. The A88X and A78X 'Bolton D4' chipsets would feature full compatibility and ensure further longevity of the FM2+ platform. That however means that AMD would have to stick with some current generation technologies even when Intel pushes for the next step in 2015 with their Skylake processors. The new APUs will still feature DDR3 memory support and PCI-Express 3.0 while Intel would start using DDR4 memory and PCI-Express 4.0 along with technologies such as SATA Express and new ThunderBolt interfaces. 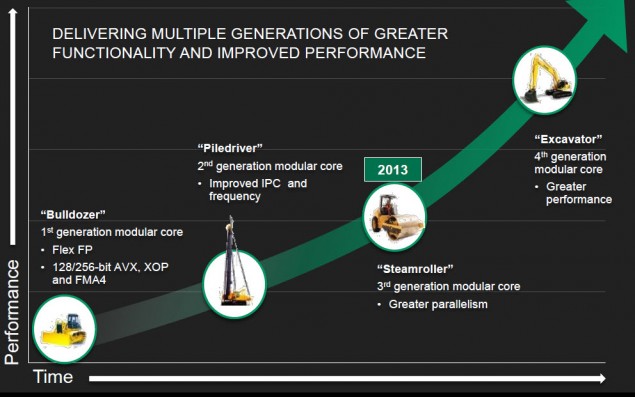 It is also not confirmed whether Excavator is truly based on a 20nm architecture or would it be a much optimized 28nm variant with new architecture. Intel's Skylake generation of processors would bring the TDP around 50W and with improved power efficiency. If Excavator is a beast as AMD suggest then they should have nothing to worry about. The platform would be fully functional with AMD's HSA support and that would not only improve performance but deliver ease of development to programmers.

No FX Processor Update Till 2015

It also seems like AMD will not be updating their FX Processor lineup and the current Vishera processors would continue to exist till 2015 on the AM3+ platform. This seems to confirm that AMD is currently fully focused on their APUs and chances on Steamroller based FX processors look slim.