AMD has released a new roadmap for its upcoming Bulldozer and Llano Fusion Processors which reveals the release date of both the platforms. AMD Bulldozer platform on which its new FX series processors would be released along with AMD's Llano based Fusion APU's, AM3+ Motherboards and  Vision 2011 would be announced at this year's Computex 2011 Event in Taipei.

The 900 series chipset on which the companies AM3+ motherboards would be based will be released on the event while the announcement of Bulldozer platform and AMD Llano APU's is imminent. Along with this, AMD will also detail and launch its Vision 2011 Technology for notebook users. Following is the roadmap which has been released by AMD: 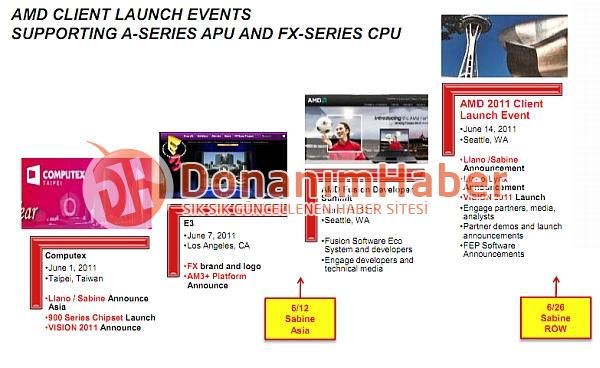 The company is also looking forward to announce the AM3+ Bulldozer platform brand on E3 2011 on June 12 and June 26 2011 will be AMD Llano day on which the company will demonstrate the APU's capabilities to the press. Alot has been going on since the last few weeks on AMD Llano and Bulldozer platform, So do check out the following news: