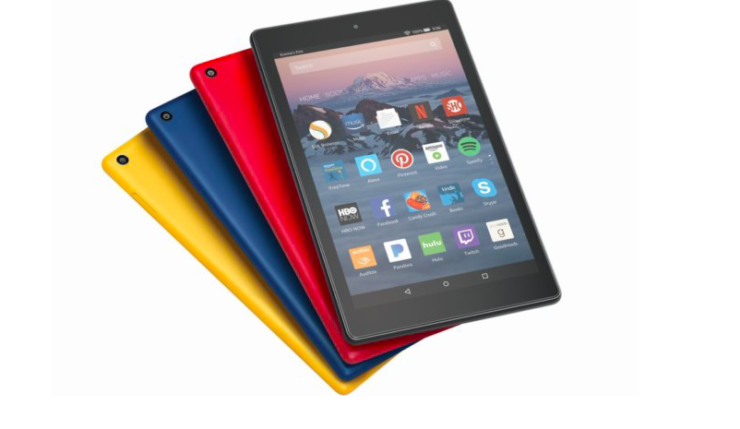 Amazon has finally refreshed its affordable Fire tablets lineup. The Fire 7 and Fire HD 8 devices have got new versions based on Amazon's proprietary Fire OS. The latest versions of both Fire tablets have Alexa digital assistant and are available for $49.99 and $79.99, respectively. Amazon will start shipping them on June 7.

The first version of Fire 7 tablet was launched in the year 2015, and now its new version is comparatively thinner and lighter. It has a better 7-inch IPS display with 1024 x 600 pixels resolution. There is an improvement in the battery as well, the new version's battery offers 8 hours backup on a single charge. There is also dual-band Wi-Fi hardware.

Fire 7 tablet is powered by an unspecified quad-core 1.3 GHz processor clubbed with 1GB of RAM and 8GB of internal storage for $49.99 variant 16GB storage for $69.99 variant, expandable up to 256GB via microSD card. The device features a VGA front-facing camera, along with a 2MP rear camera. The new version of Fire 7 would be available in Black, Marine Blue, Punch Red, Canary Yellow color options.

There's also a new Kids Edition of the Fire HD 8 tablet, which was not available earlier. The new edition comes with a rugged case that's specially designed for tough usage. It is priced at $129 and has a two-year unconditional warranty along with a one-year subscription to Amazon's FreeTime Unlimited service that offers access to videos, educational apps, games, and built-in parental control software.

Amazon is also running a special 20 percent discount offer for the buyers who buy all the three tablets together. To avail the discount, they will just have to insert promo code “FIRE3PACK” at checkout.