Amazon.com Inc. (NASDAQ:AMZN)  has been gradually partnering with more transportation companies to create an international network.

What is Amazon Freight

Earnings calls continue to be published for this quarter. As a result, more information has been coming out about Amazon’s goals in transportation. Amazon was hinting at greater scale of same day shipping with Amazon Prime and with their latest move shows they intend to be an even larger logistics company.
Amazon freight currently operates in the eastern United States including Connecticut, Maryland, New Jersey, New York, and Pennsylvania with the goal of further expansion both domestically and internationally. Amazon Freight utilizes full truckload (TL) services for the area, but with a company this large expansion could be easily possible. Their website attempts to make the process as simple as possible. 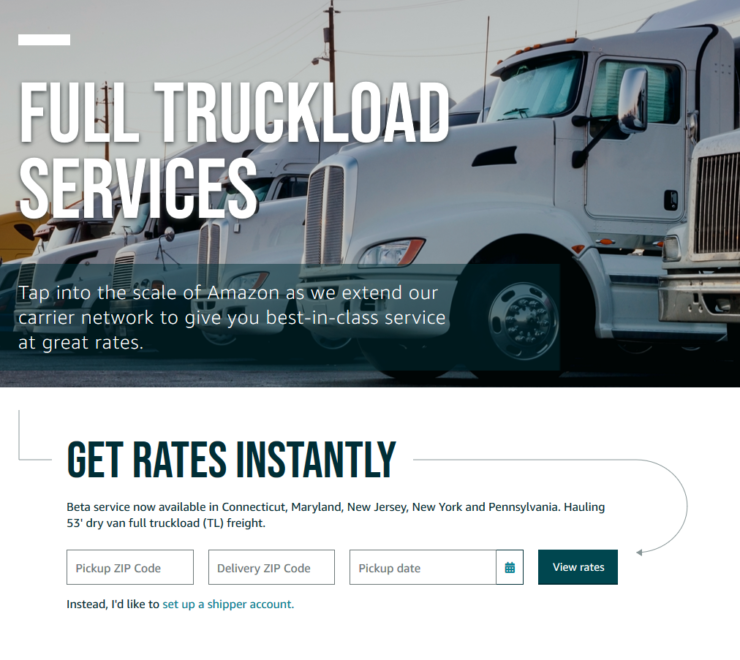 The Wall Street Journal reported Amazon’s rates are between 4-5% lower than their competitors on spot rates for last-minute transportation. The logistics industry has notoriously low margins, but if there is any company that can sustain a business without a profit, it’s Amazon.
The business of freight brokering full TL is relatively easy for a logistics company, especially if it is just dry freight instead of temperature controlled or hazardous goods. The real market opportunity would be in creating a less than truckload or LTL network, where their AWS platform could calculate capacity, demand, and cost quickly for customers and combine with other shipments already inbound or outbound in their warehousing system. Amazon has already been experimenting with parcel delivery under its Amazon Logistics division that contracts drivers to start their own business and delivers Amazon packages.

It is typical of transportation companies to have a larger network of partners, sometimes including their competition if it means cost savings for the customer or a more reliable network. Uber Freight has been on an expansion spree throughout the last year when they were spun off into their own business unit. Today they signed a partnership with SAP Logistics, which now allows their capacity to be added to SAP’s network of customers. Interestingly Uber Freight has expanded into Europe in the last month, but has avoided the Canadian market despite their geographic proximity and sparse density that could prove profitable for the company if they can coordinate customs properly.
Uber’s IPO is drawing very close, with an expected value of over $80 billion; they should have the funds to expand further depending on market conditions. In their S-1 filing for their IPO, they describe Uber Freight as:

We believe that Uber Freight is revolutionizing the logistics industry. Uber Freight leverages our proprietary technology, brand awareness, and experience revolutionizing industries to create a transparent, on-demand marketplace that seamlessly connects shippers and carriers.
The freight industry today is highly fragmented and deeply inefficient. It can take several hours, sometimes days, for shippers to find a truck and driver for shipments, with most of the process conducted over the phone or by fax. Uber Freight greatly reduces friction in the logistics industry by providing an on-demand platform to automate and accelerate logistics transactions end-to-end. Uber Freight connects carriers with the most appropriate shipments available on our platform, and gives carriers upfront, transparent pricing and the ability to book a shipment with the touch of a button.
We serve shippers ranging from small- and medium-sized businesses to global enterprises by enabling them to create and tender shipments with a few clicks, secure capacity on demand with upfront pricing, and track those shipments in real-time from pickup to delivery. We believe that all of these factors represent significant efficiency improvements over traditional freight brokerage providers. Since Uber Freight’s public launch in the United States in May 2017, we have contracted with over 36,000 carriers that in aggregate have more than 400,000 drivers and have served over 1,000 shippers, including global enterprises such as Anheuser-Busch InBev, Niagara, Land O’Lakes, and Colgate-Palmolive. Uber Freight has grown to over $125 million in revenue for the quarter ended December 31, 2018.
In March 2019, we announced the expansion of our Uber Freight offering into Europe. Although Europe’s freight market is one of the largest and most sophisticated in the world, we believe that European shippers and carriers experience many of the same pain points in their current operations as U.S. shippers and carriers.

It will be interesting to see if either Amazon or Uber can make an impact in the logistics industry, and at what cost, logistics can be a race to the bottom but Amazon and soon Uber may have the capital to spare to break further into the industry.