The Grand Theft Auto series is an role-playing action-adventure video game series developed by Rockstar Games and is a household name for gamers around the world. Owing to the huge popularity of the game, variations and mods are quite common for the series, popping up almost on a weekly basis now. So, it won't surprise you when you see an anime artwork for the game.

The artwork is based on the cartoon series 'Doraemon' which is really popular in Japan and the fusion of the two resulted in the formation of a Grand Theft Auto Anime. 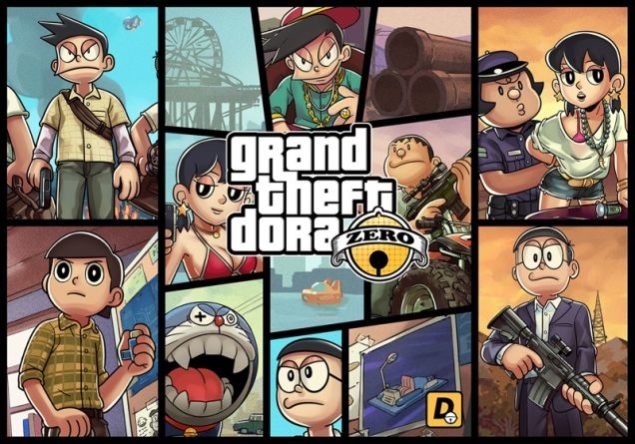 Uploaded to a Weibo account, this collection of artwork was created by an artist name En who claims GTA to be his favorite game is the GTA and Doraemon to be his favourite cartoon (although, he did not specify which part of GTA did he fancy the most).

This artwork has been spreading like wildfire on Chinese forums and Japanese Twitter. The quality of the artwork is amazing and mostly because of the quality of the artwork, Grand Theft Auto Anime looks like a decent idea on paper (I'm saying that because if anyone came up to me with a premature Idea like that, I would personally mark it a flop, but what do I know?). The artist En shared the following artwork on his Weibo account and I bet that it will leave you begging for more once you've gone through it:

I like the idea of how the artist fit an imaginary character like Doraemon into the real world animation presented as a dog.

I hope you enjoyed this amazing Grand Theft Auto Anime artwork. Stay Tuned for more gaming news and releases and do share your views with us in the comments section.