Apple's alleged 4-inch iPhone has been in the rumor mill for quite some time. Rumors for a March or April launch of the smaller iPhone have caught heat while several reports have been emphasizing on its specs sheet and features. The existence of the handset has been proven in a new video that surfaced a few days ago, showcasing a near identical iPhone 6. More on the existent end can be judged by a new leaked image that shows the much anticipated iPhone alongside the iPhone 5 resting on a table.

The leaked image of the 4-inch iPhone was obtained by One More Thing via Gijs Raggers. The user has been sharing leaked photos of Apple products months before they were officially released. However, there is no confirmation that the leaked image of the alleged iPhone is indeed the forthcoming 4-inch iPhone by Apple. Nonetheless, the image poses similar form factor to the handset which was showcased in a video. Check out the video here.

Judging on the bases of the leaked image, we can see that the smaller iPhone does indeed sport a 4-inch display with a curved glass melting into the round metal chassis. Moreover, thinner bezels, pill shaped volume rockers, relocated FaceTime camera and the power button is also relocated to the right hand side of the device. The overall smaller form factor of the handset can be seen in the image, which is more or less the same size as the iPhone 5. The purported 4-inch iPhone looks almost exactly the same size as the iPhone 5 but boasts design variations similar to that of the iPhone 6 or 6s. 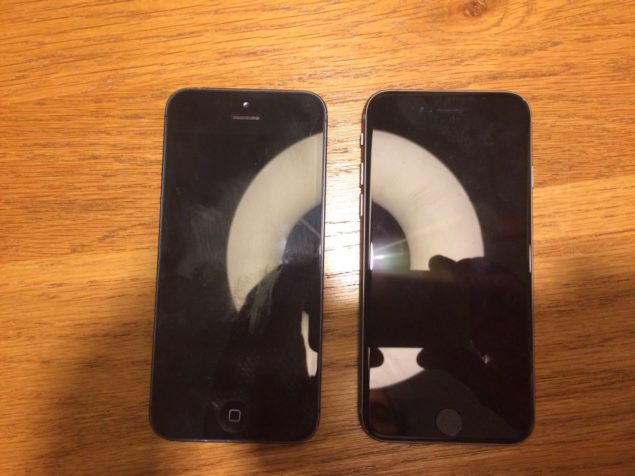 Internally, most rumors suggest that the smaller iPhone will feature upgraded specs, similar to that of the iPhone 6 and 6 Plus. Possibly, A8 and M8 chipsets with an 8-megapixel rear camera along with an NFC chip for Apple Pay support. The veracity of design that the leaked image poses, conflicts with previous rumors which suggested the forthcoming smaller iPhone will be closely similar to last-gen iPhone 5s. However, we would have to see it to believe it.

Other reports and rumors have also suggested that the 4-inch iPhone is to be called the ''iPhone 5se''. Furthermore, Ming-Chi Kuo of KGI Securities is also speculating launch of a 4inch iPhone and iPad Air 3 in the first half of 2016. A lot will be exposed in the March media event in San Francisco, so do stay tuned.

As for now, what do you guys think about the leaked image of the 4-inch iPhone? Let us know in the comments.