Can the Alienware Alpha Even Play Star Citizen?

As part of an ever growing series on the Alienware Alpha, I'll be conducting tests on various games, demanding and not, to see just how it holds up in the games that we love and hold dear. The idea is to give a good impression of the capabilities of the Steam Machine concept in general and to also show the limitations that one should watch out for when shopping for this type of PC.

The short answer to the title question is that, well, yes it can. But what you define as payable in a space-sim might very well differ form my perspective. The long answer to that question is a bit more complicated then that. A question with a, perhaps, non-answer. 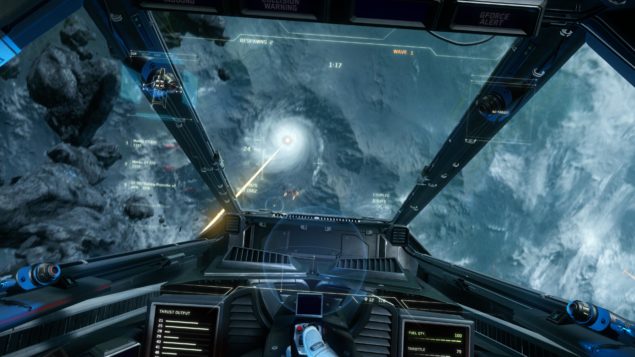 Is the Alienware Alpha capable of playing the graphically intense Star Citizen?

Despite the fact that it's a pre-built computer from a company that doesn't necessarily have the greatest of reputations, it still remains a fantastic choice when looking at entry level gaming PC's entering the market. The base model at the base price is not being marketed towards the high-end PC crowd, and should never be compared as such. It's woefully underpowered compared to the latest and greatest, but that doesn't mean that the Alienware Alpha isn't able to provide a great experience within it's own limits. Just be mindful of those limits and you can quickly come to enjoy this little box. Remember, it's purpose may not be for you, but it does fulfill a market and a consumer need. The Alienware Alpha has also helped to redefine just what playable really means.

Star Citizen is perhaps the most complex and intricately modeled game that's ever been created. Every object is a complete working 3D model with all the parts and pieces functioning within that model. That means that there is a lot to render under the surface in addition to the gorgeous models, textures and the wonderful computationally intensive interface used.

First, here are the specs for the base version that will be used for testing.

To answer that question we must then look at the minimum requirements for Star Citizen to try to predict just how capable the Alpha is going to be. Or even if it can run the game. Right now, to access the hanger module and to be able to play with reasonable performance you need the following:

While most of those prerequisites are met quite handily, the RAM issue, however, is not so easily met. Unfortunately the base only has half of the RAM required to play. Also, technically the CPU is dual-core, though the four separate threads should prove useful. That doesn't mean it won't load just that we should be warned that performance might suffer as a result. That's a fair assumption, of course. Even the graphics card has the chance of being a bit anemic with this game, as it demands a lot out of a Titan X as well.

Before we begin, I did run into an issue where the Alpha would lock-up when trying to enter the Arena Commander module. It would not load regardless of anything I tried adjusting in the settings file or in-game. Because of the alpha status, it's expected. And that's okay, because the most intensive portions are in the hanger while walking around your gorgeous ships, anyway.

All benchmarking was done via FRAPS while in game. All hardware data points were captured with HWiNFO64. I walked around the hanger in a pre-set path to better replicate the conditions for each test. The data was then compiled in Excel to produce the charts you'll see below. The resolution was 1920x1080P and in-game presets were used. Settings can be manually controlled through the configuration inf, but for the sake of simplicity, I used only the pre-sets offered.

Let's begin with the lowest settings. 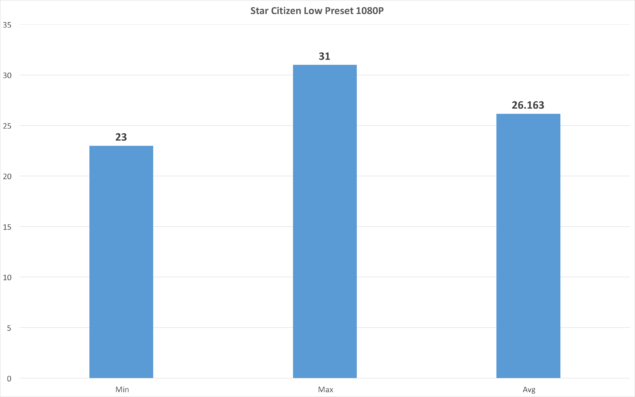 Not unexpected, to say the least. CryEngine 3 is an unforgiving experience and it shows even with this lowest of presets. For the record, it was a smooth experience and very few instances of stuttering were noted, so it was indeed playable. 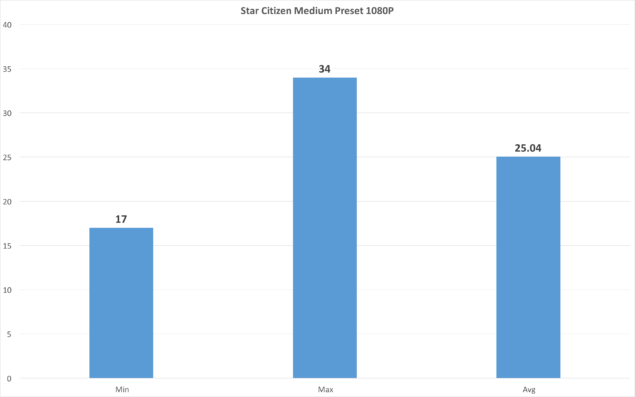 Again the results are expected. The slight increase in the the maximum FPS is likely an anomaly and the result of any number of variables. Nothing to worry about. The average and lower minimum tell the story we need to be told. The performance is largely the same. 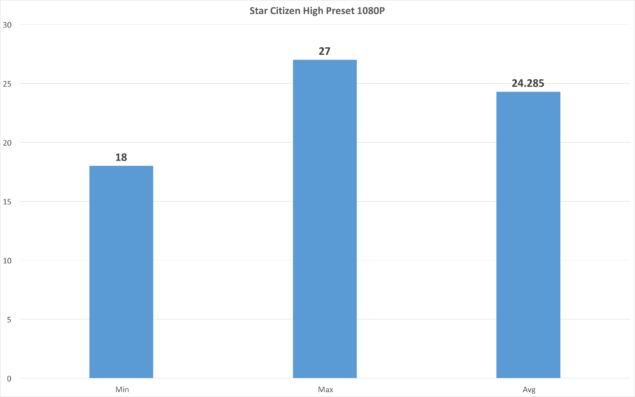 Well now, these results are beginning to be a bit more interesting than I thought. They all look to be very similar. So similar in fact that I wouldn't believe there were any changes in actual graphical settings if I couldn't see the variations once the pre-set has been selected.

This is interesting indeed. Again, for what it's worth, the high pre-set presented us with a relatively smooth and stable frame rate that allowed for an acceptable level of play. It wasn't so bad, really. I dare not go to high-quality, as the lack of RAM may end up having Windows throw a fit.

But how is that RAM being utilized, or how much is being used at a given time? 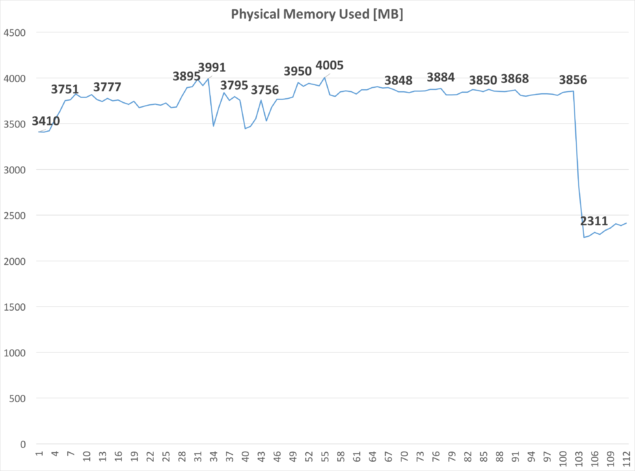 We can see that actual RAM used hovers around the peak of physical RAM available. After the 4096MB mark it would then start using swap space on the HDD, further slowing down any data loading. But it doesn't look like that was the case here.

The following readings were recorded during the Medium pre-set benchmark. 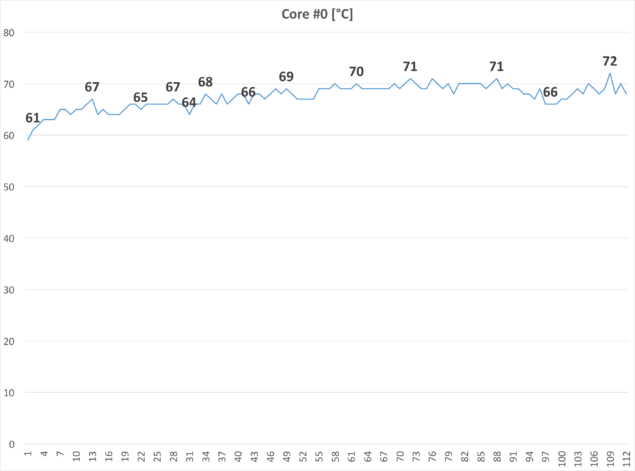 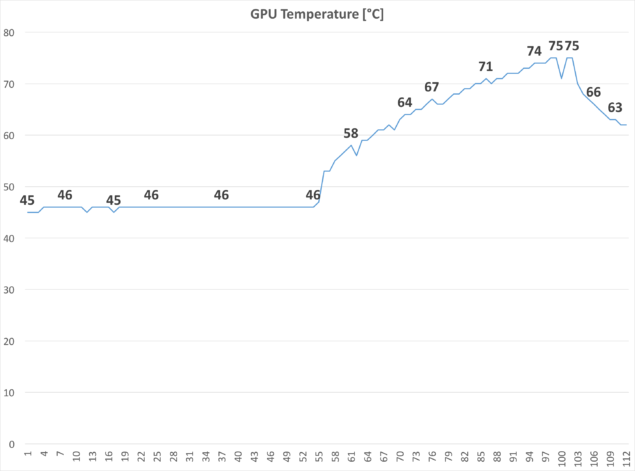 CPU and GPU temps seem to be in acceptable ranges. Certainly nothing to worry about. In fact, I'm actually a bit surprised that the 860M is kept that cool within such a small package and with a desktop CPU right next to it. Kudos to Alienware for their engineering and design of this little magical box.

As we can see below, those lowish GPU temperatures mean that the 860M can stretch its muscles and reach it's peak speed and stay there throughout the run. Not too shabby, even if the overall performance leaves a bit to be desired.

What can we conclude from this?

The conclusions are fairly simple, here. The Alienware Alpha can certainly play Star Citizen, though it won't play it very well. That is, the base model can play it adequately. Once you upgrade the RAM, perhaps throw in an SSD and maybe even switch out the CPU, then the added horsepower might be enough to garner more than adequate performance. But the price also increases appreciably as well, which defeats the point of the base Alienware Alpha to begin with.

Is that performance truly bad? Not really, no, considering that a lot of console games play at around 30FPS or lower anyway. You have to remember that the 60FPS phenomenon is a relatively new thing. If you're primarily a console player, then you might already be used to playing games at 24-30FPS, as that's been the general target for some time. Now the magical 60FPS has come into the limelight, but that doesn't change the fact that we've had lower performance numbers and have been satisfied before. PlanetSide 2 is even going to be capped at 30FPS due to performance issues, and will likely dip below that during moments of intense battles. Will that make it a horrible game? Probably not, it's actually a rather amazing game.

No, it's not that big of a deal, and these performance numbers are more than adequate to provide countless hours of enjoyment. Isn't gaming about having fun, anyway? It surprises me when we nitpick a games graphics or performance so very much that we almost completely negate the very purpose of gaming itself; to have fun.

But the Alpha can play Star Citizen. Once the final (or at least further on in development) version of Star Citizen is released we can probably expect easier control of graphics options within the game and even better performance.

It's still astonishing that the bright little black box from Alienware can play it at all, let alone play it well enough to be fun.

My disclaimer however, is that if you want to truly play Star Citizen, you might want to invest a bit more money in to your rig. The Alpha is certainly capable, but it would be far more enjoyable at a higher resolution and with everything turned on, which the Alpha simple cannot do.