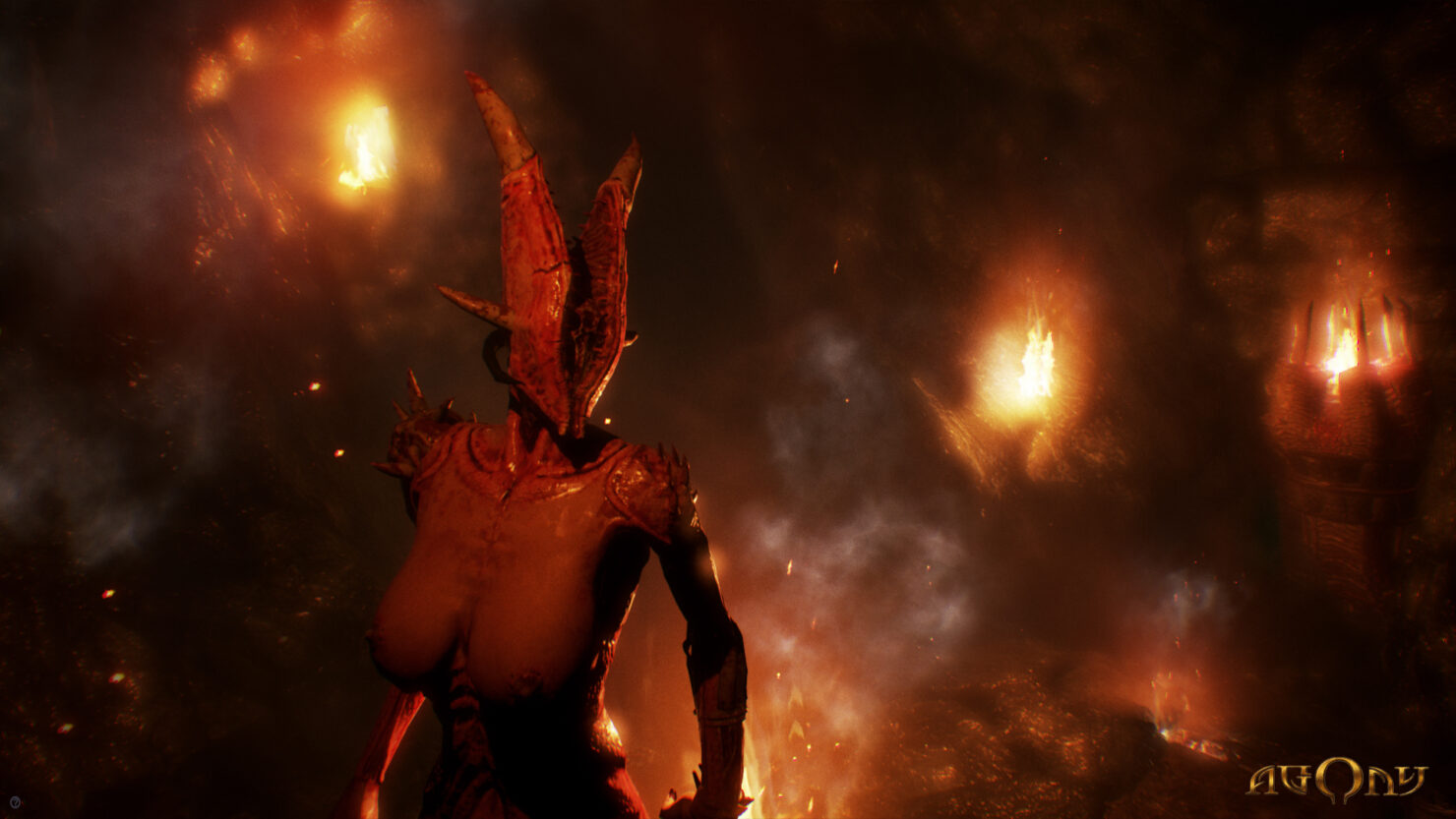 Not many horror games are based in Hell, as it turns out. That void will soon be filled by Agony, a project developed by nine-man team Madmind Studio, funded through Kickstarter and published by PlayWay.

In Agony, players will be a lonely tormented soul with no recollection of the past, though empowered with the ability to control other denizens of Hell and even possess certain demons. The final goal, as you can imagine, will be to escape Hell, though it doesn't sound like an easily accomplished task.

Ahead of the scheduled March 30th release on PC (the system requirements are here, by the way), PlayStation 4 and Xbox One, we've had the chance to chat with founder and CEO Tomasz Dutkiewicz, the leader of a small but experienced studio whose credits include games like The Division, The Witcher 3, Alien Rage and Sniper: Ghost Warrior 2. Below you can find the full conversation spanning a wide range of topics from longevity to influences, from technical specs to a potential port for the Nintendo Switch and much more. Enjoy the read.

When did you begin working on Agony?

The first prototype movie for Agony was created just by me in 2015. After seeing how popular the video was over the internet, I've talked with few of my colleagues, and we've made another prototype movies, which helps us to explain the original vision and atmosphere of the game.
With all of the support from Agony fans, I've managed to find the investor and create "Madmind Studio" with the group of my colleagues from the gaming industry. The official Agony development started in January 2016.

What were your inspirations and influences, both in terms of art style and story?

The main inspiration to create a game set in hell was my first reading of "Dante's Inferno". The complexity of the world from Dante's vision, was so fascinating to me, that I was starting to read and learn more and more about hell, from the oldest known scriptures from many different religions and systems of belief. It helps me to understand this realm and find patterns and similarities in all descriptions. Thanks to that, I was able to design a world which feels natural in a sense that many people who look at agony, have a weird feeling that this is exactly how hell should
look like. In my research, I was trying not to copy the art style of other artists or steal their ideas and visions.
I believe that creating a game which is different from anything people sees in the descriptions finds in religions, makes them more fascinating with the story of the game and the world we've created. The only way to do that is to draw inspiration mainly from our own visions, not from stealing ideas from other, well-known concepts.

The game was initially scheduled to launch in Q2 2017. What prompted you to delay the launch for a full year? Did the game get any bigger in the meantime or was it just a matter of polish?

At first, Agony was planned as a short, scripted journey through hell. Thanks to the support of our fans and investor, we've managed to extend the original concept and make the game much bigger and complex. We've added more demons to control, more optional areas, puzzles, and enemies.
Thanks to Kickstarter, we've even added boss fights to the game, and have further achievement - a physical version of Agony.

To what degree fighting enemies will be important in Agony compared to, for example, trying to avoid them?

For the most part, players will have to avoid enemies as much as they can, but after learning more skills and understanding world of the game better, they will also learn how to control demons and use them to their advantage. For example, when you will see the area guarded by demons,
you will have to possess and take control of one of them and use his strength to clear the area from the enemies and unlock secret path. In the latter part of the game, the player will be able to choose what gameplay style fits best with him and explore the world of the game as martyr or demon.
So sometimes players will have to possess stronger creatures and destroys everything that blocks them from getting to specific areas.
It’s often given free choice for player of how he wants to experience the game world: Run through the floating forest and kill everything on your path, or explore every area and find more about the world and creatures?

What can you tell us about the Red Goddess character?

I would prefer to keep this character secret to the release of Agony, so I can't say much about her.
But what I can tell is that she is the only ruler of the realm in which the main characters are trapped.
Every martyr and demon knows about her, and try to be as close to her as possible. Humans are building the unreal constructions to please her, and demons are trying to torture and punish others in the most creative way they can, to make her interested.
She helped to create hell, and she has the power to fully recover memories and knows the way out of this hostile land.

Would you characterize the game as a linear experience or is it possible to explore environments and find side content?

It is up to the players how much they decide to explore the game world and learn the story.
The main path of the story is going to give you answers to the most important questions, but to know more about the protagonist and this demonic dimension, players will have to spend a little more time in the darkness.
However, we won’t give players all the answers, many times leaving them with the opportunity to come up with their own interpretation.
We are trying to design levels to be partially open and allow players to explore them if they decided to do it. The main path of the story will be clearly defined, but it is up to the player if he decides to take the risk and try to find the secrets on the alternative paths full of dangers and demons.
Some parts of the levels remain locked until protagonist finds the proper equipment, which will allow him to get to the seemingly inaccessible places.

What's the estimated average game length from your play sessions?

Standard playthrough in the Story Mode should give you about 12-14h of gameplay, but if you want to unlock all of the seven endings, alternative passages, hidden chambers, and collectibles, you will have to spend around 35+ hours in the story mode.
The game also has an "Agony Mode", where you can play endlessly in procedurally generated levels.

How's the rating process going? Is there anything significant you'll have to cut on consoles to be able to publish the game there?

We were talking with rating companies for few months and have many consultations with them, to make sure that we will censor only the most controversial elements. Sometimes it is better to discuss the subject in details and cut, modify or remove only small parts in the scene, not the whole scene with thinking of "we will remove this whole scene just to make sure that censors will be happy".  We've tested how far we can go with our vision of hell, and we've pushed the boundaries of what can be done in video games just to the maximum.

What is the status of VR support? Will it be available at launch and if so, on which platforms?

The plan is to make a special version of Agony, which supports VR. It would be extremely difficult to just add VR support to the standard version of Agony.
When Agony will have "gold status", we will start working on VR. It's too early to say on which platforms the VR version will be released, but we've tested the game with Oculus and HTC Vive and it looks very immersive.

Are you planning to support PlayStation 4 Pro and/or Xbox One X with dedicated enhancements? If so, can you share the detailed specifications (target render resolution, frame rate, graphics settings compared to PC etc.)?

No, right now we are focusing on the standard version of PlayStation 4 and Xbox One, but who knows what the future brings for Agony.

Does the game support HDR displays?

Not at the moment.

What kind of PC will be needed to play the game at 4K resolution and 60FPS with max settings?

I'm testing the game night after night on my pc, and it works flawlessly with 4K/60fps. If you have a machine with similar power, you should be able to play with everything set to "Ultra"(Maximum).

Agony is powered by Unreal Engine 4 technology, which is supported by the Nintendo Switch. Is there a chance for a port at a later date?

It would be great to have Agony on Nintendo Switch, so yes - there is a chance for a port in the future. If Nintendo will be interested to have our game on their console, we would be very happy to make a port for them.