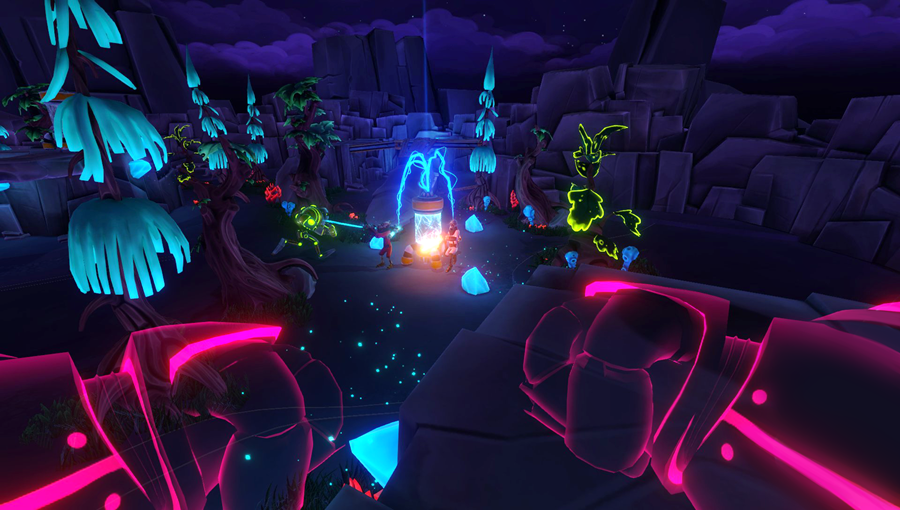 Aftercharge takes place on Dusk 11 where the Aftercharge Corporation has been siphoning the planet's energy. Turns out the planet's unstable energy has affected Aftercharge's line of worker robots causing them to revolt. The company has sent a unique enforcer squad to deal with robot uprising.

The way this plays out is that worker robots are invisible and need to destroy six extractors that are spread across the map while enforcers need to take them out. Here's the catch, enforcers are a classed-based attack force that can't be harmed by workers. Their weapons consume energy that needs to be recharged at nearby extractors that the works are trying to destroy. As more and more extractor get wrecked, the Enforcers have fewer ways to charge their weapons.

The trailer shows that Workers have to use stealth and Enforcers need to use a keen eye and their firepower.

Laurent Mercure from Chainsawesome Games explained why the strange twist to online play:

While Aftercharge is a shooter at first-glance, the core gameplay mechanic of invisible attackers against armed defenders was invented in a totally different space. It has enough in common with shooters so that fans of the genre will feel comfortable. With Aftercharge we wanted to play with the rules and bring new mechanics to create a quick-paced competitive experience that’s fresh, highly strategical, and yet approachable.

Aftercharge is coming to consoles and PC in early 2018 and will be playable for the first time at PAX East.