Acer announced “in the air” motion control for its Aspire V17 Nitro Notebook PC’s. It seems to be a worthy notion largely.  This featured composition will enable the movement detection in the three dimensional space. Intel’s Real Sense 3D Camera is fundamentally featured in this version. 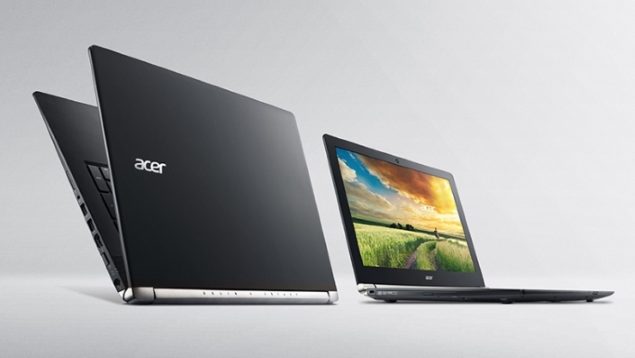 This module by Intel includes a conventional infrared camera and laser projector of the same nature. This infrared light is bounced back to infer depth which is then combined with Real Sense motion tracking. This process finally facilitates the motion tracker to detect facial expressions, that too with body movements. The three dimensional detection will also help laptops or PC’s create 3D models which can be used for 3D printing as well. Acer claims that 3D modeling, mapping and architectural designing and gaming can be done with the addition to other operating functions without even touching the keypad or leaving any fingerprints.

“With Intel Real Sense technology consumers will be able to control and interact with their computers in a natural and immersive way,” said Kirk Skaugen, Senior Vice President, Intel and General Manager, Client Computing Group. “Whether it is controlling a game with your gestures or easily scanning your face or an object for 3D printing, the Acer Aspire V Nitro featuring Intel Core processors and Intel RealSense is an exciting step forward for consumers looking for a high-performance notebook.”

Microsoft Kinect is of the same category as the gesture sensing trackers. This is basically to facilitate the end consumers to play and operate the device without touching the mouse or keyboard. However the specifications will vary according to the region it is supplied to. The Aspire Notebook V17 will be made available in the month of January worldwide.  Real Sense technology has been used in various other devices including Sprout.  Acer also announced two other 3D applications.  In Las Vegas, the Real Sense furnished laptop will be displayed on the Consumer Electronics Show (CES) this week. This laptop will have a 17.3 inch HD display with a memory of 16GB at hand. A 4th generation Core i7 processor will also be integrated coupled with some other features will be present in the laptop going to be displayed at CES this week. The price for this upcoming tech Acer notebook V17 is not yet decided by the company.