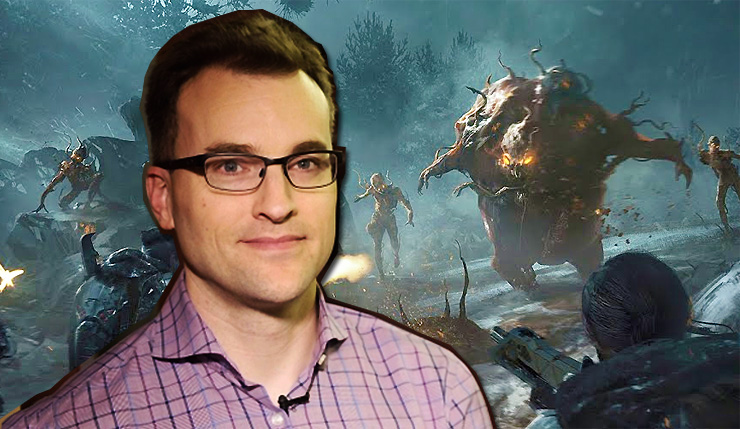 SpatialOS isn’t going anywhere just yet. The new tech from British startup Improbable allows developers to run their games across multiple servers in the cloud, allowing for bigger, more complex online worlds. At least that’s the theory – a major SpatialOS game has yet to be released, and some promising projects, like the 400-player battle royale game Mavericks: Proving Grounds and the sci-fi sandbox Worlds Adrift, have been cancelled.

Despite these setbacks, Improbable has doubled down, hiring former BioWare general manager Aaryn Flynn to head up an internal development studio in Edmonton, Canada, which is working on an all-new online multiplayer RPG. Flynn was in attendance at the Reboot Develop Red conference in Banff, Alberta, where he gave a talk about the new tools Improbable is creating for SpatialOS developers. Shortly afterward, I sat down with him to discuss the challenges facing SpatialOS, how his new RPG was inspired by a BioWare classic, and more… 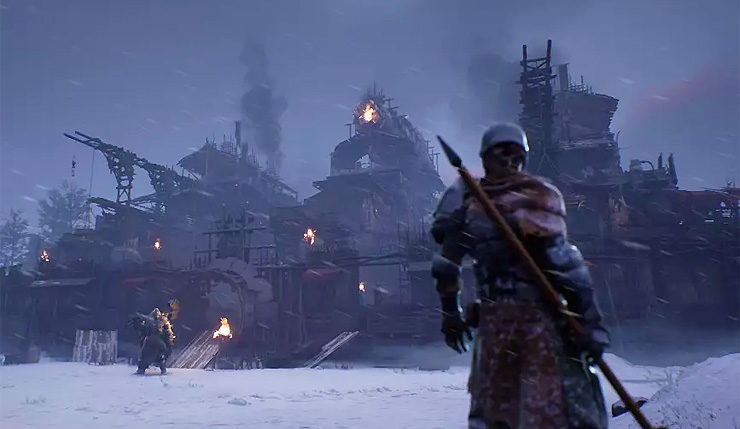 Before we delve in too deeply, could you provide a quick overview of what SpatialOS is?

Of course, the elephant in the room is that we haven’t seen any full games using SpatialOS come to market yet. Some, like Mavericks: Proving Grounds and Worlds Adrift, have been outright cancelled. Why are devs seemingly having trouble with the tech?

I think game development is hard. All we can do is try to make it a little easier. Both [Mavericks and Worlds Adrift] were very ambitious, which is a good thing, but ambition is also more likely to result in mistakes and failure. We certainly learned a lot working with those customers for our platform, and now that we have internal studios, my hope is that we continue to get good feedback from the platform, faster and faster, such that it evolves to be better and stronger.

When you first joined Improbable, it was said you were mainly working on new tools to make SpatialOS development easier. How, in a real, direct way, are these tools alleviating the problems of the past?

I would say the biggest way [the new tools] do that is they help everyone understand what's going on in the game experience. Any decision-making process involves information gathering and the more we can speed that up, the more likely decision-making will be successful. Our tools are designed to provide more and more insight and information for developers...they still have to make decisions, they can still make bad decisions, we can't help that, but we try very hard to give them the right, relevant information through the tools we've created. Of course, the other side is to give them the power to go act on their decisions. That's a journey and destination we're going to keep working on. 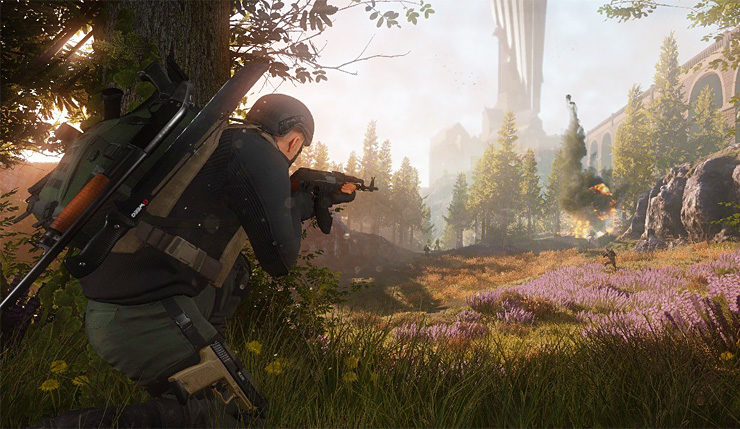 Are there any new tools you’re still working on that could really change things?

I think I covered the big ones [in my talk]. The one I really like is the GDK (game development kit) paradigms. So, this idea that we're going to make sure that popular game engines of today, like Unreal and Unity, will work very seamlessly with SpatialOS. That hasn't been the case. If you want to go back to Mavericks and Worlds Adrift, they built the connective tissue themselves between SpatialOS and their engines -- CryEngine for Mavericks, and I think Unity for Adrift. Now that we've solidified on [Unreal and Unity] we've learned a ton about how to make it work and preserve workflows. Developers who are accustomed to working in a certain way can keep working in that way. The work isn't done, we're still releasing updates to our GDKs, but that's the main work we're doing right now.

I get the sense a lot of tools you’ve created, like the one that lets devs launch a build of a game by just clicking a link, will be really useful for decentralized teams. Do you see SpatialOS being an important tool for indie teams that are increasingly spread out all over?

Yeah, of course, that's a great point. The cloud is almost ubiquitous now, and I didn't have the chance today, but I could have very easily opened up the inspector on my phone and connected to one of the builds of our game being developed back home in Edmonton and taken a look. When we do a build, folks from the London team will jump into it and play sometimes, and ask us questions and try things, and vice-versa. When they're working on things in London we can jump in and try things out. It's a broadly decentralized technology.

Will SpatialOS help with the workloads the industry is infamous for? Could it help reduce crunch?

I dunno of SpatialOS itself is going to reduce crunch. It's a tool, right? I think it offers opportunities to work more quickly, but you can easily fill your day back up with a bunch of other stuff you want to do. Or that you've been told to do. So, I don't think we solve that problem, but we are a tool that, I hope, gives developers the opportunity to create a more sustainable and balanced development environment.

It’s been announced you’re working on an original online RPG using SpatialOS. Most of the titles we’ve seen built on the platform have been more action-based – sandbox shooters, battle royale games – what does SpatialOS bring to the more narrative and world-driven RPG genre?

It brings some of the classic things like scale and deeper simulation. The simulation thing is interesting, because we can do things we otherwise couldn't. Every online RPG has been constrained to a single "box" if you will, or it's required an enormous amount of bespoke engineering to make it work over multiple boxes, but now with SpatialOS we have a technology that provides that for us. So now our developers get to have fun and do some thinking about what makes a great online RPG experience. And we don't have all the answers yet -- we're still trying things on and experimenting, but simulation is definitely cool.

The fact that we can let devs get together at the click of a button -- upload the client to the cloud, then download the client to everyone's PCs. You can do five builds, each with tweaks and adjustments in them, before lunch time. So that's a fast cycle to learn on. You're giving devs the confidence to make decisions and then execute on them. 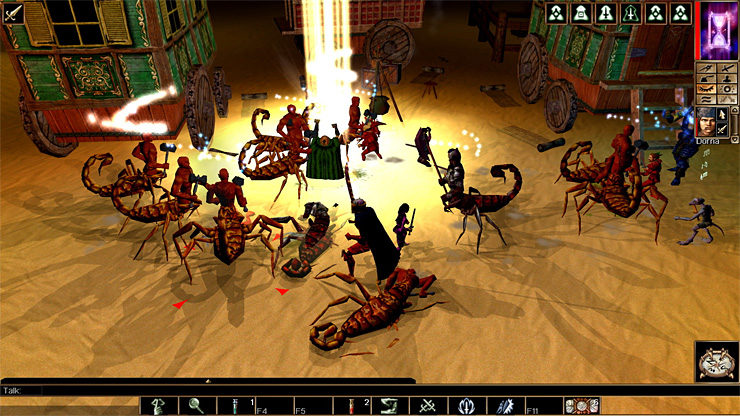 Remember when this is what a BioWare game looked like?

During your talk you mentioned your new game is drawing inspiration, at least in terms of design, from Neverwinter Nights. Given you got your start at BioWare and what that studio is producing now, is part of your inspiration to kind of carry on that classic BioWare flag?

[Laughs] Ahh, no...I'm just somebody who got to work on a game they really liked back in the day and always wished they could do more like that. It's just inspiration, we don't have the Dungeons & Dragons license or anything. It's just, what are some things we got excited about 15 years ago that we couldn't do that maybe we could get done today?

Aside from the Neverwinter Nights inspiration, is there anything else you can tell me about the project?

You mentioned you’re getting close to being able to deliver a “vertical slice” of the game. When might we be able to see or play that?

Yeah, we might soon have a chance to bring the game together and create a...it's non-linear, so "end to end" is the wrong term, but a good healthy experience that you can do cool things with.

So, maybe we’ll be able to see it next year?

I hope so! I think the team is doing great work and I'd love to start to show it off next year. I can't commit to that 100 percent, but that's my hope.

Reboot is a primarily a developer’s conference, so we’ve talked a lot about how SpatialOS benefits devs, but what will the user-end experience be? What’s the benefit to me, the player? If everything’s being processed in the cloud, will I be able to play your upcoming game on my crummy laptop?

No, we don't do any sort of streaming to your device like Stadia does, for example. We offer more computing power in the cloud that you can use to run services. That may effect the player experience in various ways. Like, you could create a simulated ecosystem for example. We move some work, like pathfinding to dedicated workers [in the cloud], so you can have more creatures, more enemies, or whatever on the screen. But ultimately, you're still going to need whatever you traditionally needed -- a console, PC, or mobile device -- to run the games.

Speaking of Stadia, Google has talked up how they’re going to revolutionize gaming through cloud computing. What gives SpatialOS the edge over these mega companies and can it keep that edge?

Well, [SpatialOS and Stadia] are very compatible. Stadia runs the game in the cloud and sends the video to any device that has a screen. Those experiences may still need some additional compute on the server side to enhance and augment the experience, and that's where we come in. They don't oppose each other in any way.

Ah, okay, so you see something like Stadia and SpatialOS more as partners?

Actually we are a Google partner. When they did their Stadia announce, our logo was in the background. We're a long-established partner -- we're very familiar with Stadia.

Do you see SpatialOS having a place on next-gen consoles?

Yeah, so any hardware you might have in your living room, like next gen consoles, it's going to connect to the cloud. So, absolutely -- as consoles look to evolve, we want to be on the backend to help developers create a better experience.

Improbable now has three studios in London, Edmonton, and Seattle. How many “first-party” SpatialOS games do you have in the works?

Aside from your new game, can you tell us about the other two projects?

Scavengers, from the Seattle team, has been announced. We haven't disclosed anything on the London team's project yet.

Thanks for taking the time to chat!

You can get more details about SpatialOS and the games being made with it at Improbable’s website.