Apple seeded beta 6 of OS X 10.11 El Capitan just yesterday, bringing with it a bunch of bug fixes and performance enhancements. And much to our surprise, the new build of Apple's desktop operating system contains references to a 4K 21.5-inch Retina iMac, a device some believe won't see the light of day any time soon.

This is a rather surprising development, considering it was only yesterday when we got glimpse of the news that Apple is all set to refresh its range of iMac computers this quarter, bringing with them improved processors and display panels. But the report fell short of revealing if the new range of iMacs will include a 21.5-inch model with a Retina display, further expanding Apple's portfolio when it comes to super sharp panels.

Diving deep into OS X 10.11 beta 6's code, meta data pertaining to a 4K 21.5-inch iMac has been found, adding fuel to the fire that Apple will indeed bring the Retina display over to its smaller iMac range of computers, allowing those with tighter budgets to delve into the world of super sharp graphics.

The native resolution of the new 4K 21.5-inch iMac is listed to be '4096×2304,' which means that users can expect text and images to look absolutely crisp, considering how pixel density goes beyond the Retina mark when squeezed inside a small space of just 21.5-inches.

The meta data also reveals what the next iMac would visually look like, and on the face of things, users shouldn't expect any noticeable change in terms of external hardware design. But given how popular Apple's current design of its desktop is, we're quite certain that the company would want to focus on the internals of the device rather than going all out and pushing out a redesigned iMac with brand new and reworked aesthetics. 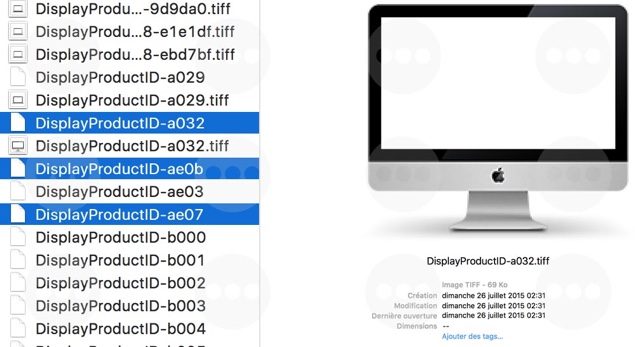 KGI Securities analyst Ming-Chi Kuo yesterday revealed that Apple is set to release new and refreshed iMac computers this quarter. Though he failed to provide a concrete release date alongside explicit details, but if today's revelation is anything to go by, then it's pretty clear that Apple wants to bring the Retina display to its 21.5-inch iMac. Whenever Apple does reveal refreshed iMac, or if we get wind of any new leak, then you'll definitely get to hear from us, so stay tuned to our coverage.

The non-Retina iMac lineup was last updated back in October of 2013, therefore it's safe to say that a refresh is long overdue at this time.