A new technology has been introduced by scientists in the University of Montreal which enables computer cursors to interact in 3D in single or multiuser, local or remote collaboration. It will have many applications such as medical imaging, architectural designs and in computer gaming etc. According to the researchers it’s not so much about turning Word into IMAX rather it’s more about the whole experience that it will offer designers to navigate through and modify their creations, this way the designers can manipulate using 3D interactions their 3D designs. According to the Lead researcher Professor Tomas Dorta, This new technology challenges the concept of what is normally perceived to be a cursor.

"The cursor becomes a drawing and controlling plane. The techniques we're unveiling involves using a tablet to control the cursor, but as it does not necessarily rely on external tracking of the user's movements, eventually other devices could be used, such as smart phones or watches," Dorta said.

This 3D cursor will enable the computer user to create drawings on tablets and provide them with a full-fledged 3D environment which is demonstrated under the Hyve 3D-design system. All the designers are pre occupied with their relevant jobs like they gave an example of designing a living room, for that purpose they will test different combinations of furniture according to the area and other things in the surroundings.

"We use a Butterfly-net analogy to explain how the cursor selects objects in space - the users simply sweep the 3D cursors through, for the manipulations of objects, the users can use gestures and movements such as pinching and orientation," Dorta said.

Optical illusions lead to the outcome of immersive images which are generated by high resolution projectors. It acts as a specially designed concave fabric which is spherical and has a mirror which helps projecting the image on the screen. According to Dorta it is one of the creative processes related to computers and the interaction of humans with computers. Experts concentrated 3D scenes onto a spherical projection in actual time. 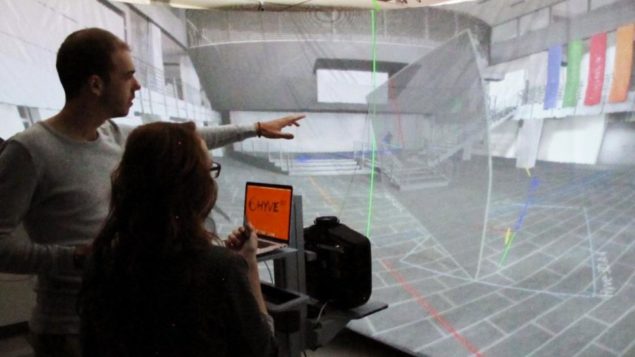 Save 18% on the Official iPad mini Smart Folio