Black Friday is one of the biggest shopping days of the year. Most companies offer special deals to their customers on Black Friday. Apple is no different. The company has officially announced the 2012 Apple Black Friday Sale. This one day shopping event will see many products being offered at discounted prices to customers through online as well as brick and mortar stores. 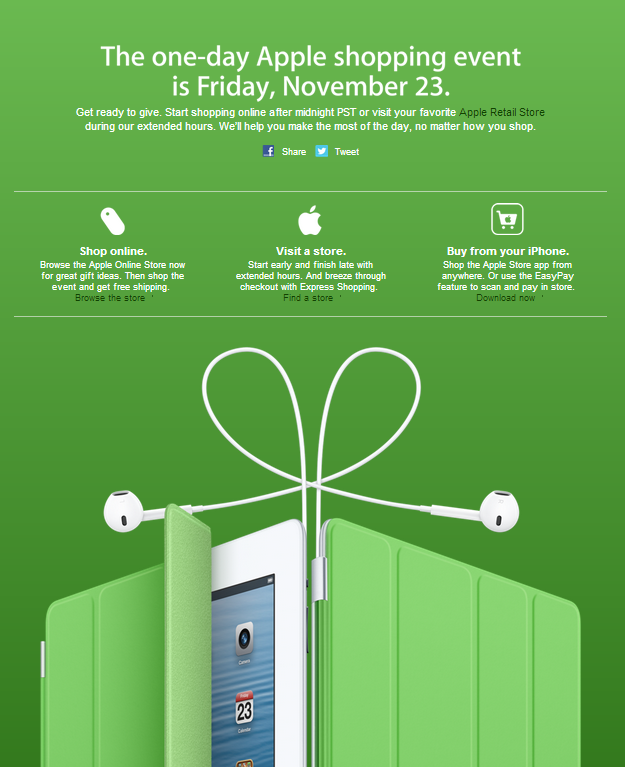 Apple has not revealed the deals it will be offering in its Black Friday sale. Nevertheless deals will be available to customers via online stores as well as physical Apple Retail stores. Promotional pricing offered at the 2012 Apple Black Friday sale can not be combined with any other pre-existing offer. The discounted prices are strictly for end users only, resellers and distributors are not entitled to Black Friday deals by Apple.

The dedicated 2012 Apple Black Friday sale page for the U.S. is now live, previously customers who had received emails from Apple regarding this sale were being directed to the Australian Apple online store. Special prices will be available to customers starting from 12:01 a.m. to 11:59 p.m. PST on November 23rd, 2012. Apple further adds that sale prices are subject to stock on hand and while supplies last. Apple is expected to announce 2012 Apple Black Friday sale deals in the next couple of days.

Do you prefer shopping through the online Apple Store or through the retail stores in your particular city? Let us know by dropping a comment down below.