At I/O this year, Google announced their 'digital wellbeing initiative' which was aimed at curbing smartphone addiction. It is, however, still in beta and available to all devices running Android P (which is a grand total of 4 at the moment.)  An app that tells you to get off your smartphone is a bit redundant, but Google thinks it's a good idea. Today, you can find all of the YouTube tools in one place, alongside your personal time watched profile.

As seen in the images above, you get to see exactly how much time you spent watching videos daily and weekly. It can also calculate the daily average. 'Scheduled Digest' is now under the 'Time Watched' tab. For those who don't know, 'Scheduled Digest' sends you one notification across all your subscriptions at a time of your choosing. 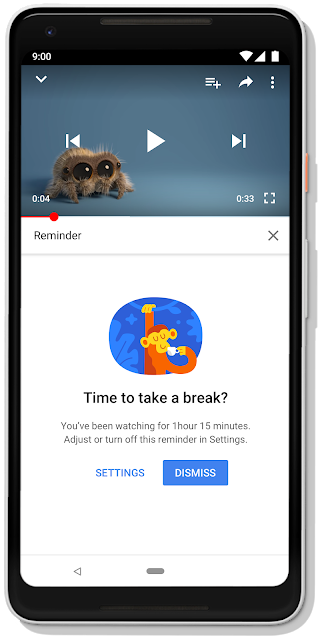 You can even prevent binge-watching to a certain extent with the 'Remind me to take a break' option. After you've set the timer to a value of your choosing, the app will notify you to take a break every time you've crossed it. Although you can click on 'Dismiss' and carry on, it still might serve as a deterrent for some Digital Wellbeing also include disabling sounds and vibrations and is enabled by default. The feature is live now and can be accessed on the latest version of the YouTube app.

Now you can track how much time you spend watching YouTube videos, so it’s easier than ever to know when to take a break. Learn more about our tools to support your digital wellbeing: https://t.co/OFmyxkCRuA. pic.twitter.com/NWA8Ujt1XL

I'd highly recommend that you read the thread underneath the Tweet. It is a grim reality about the absolute state of YouTube.