YouTube already houses the “Autoplay” feature that automatically plays the next video in the list, once the current video ends. Now, it looks like Google is planning to bring the Autoplay feature on YouTube for Android app's home screen.

Android Central first spotted the new feature on YouTube for Android. The newly-added option “Play as you browse” works in the “Home” feed of the app. It plays the videos as users browse, but it has to be enabled from the app's settings first.

Thankfully, the feature is not as intrusive as the name suggests. It does not play audio automatically, which saves us from the pain of closing the app. Instead, it overlays subtitles in the live preview of the video, right from start to end. The video at the top of the homepage of the app starts playing first while the next one begins when you scroll down. 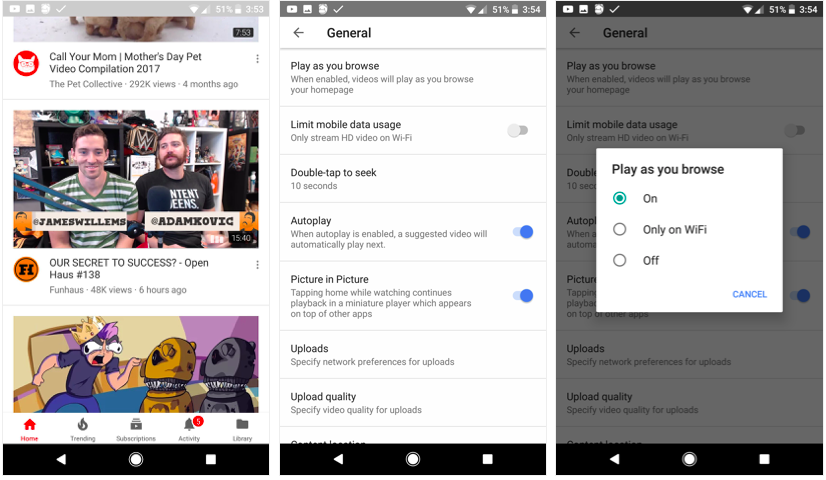 Besides, if you do not like the new “Play as you browse” feature, then you have an option to disable it from the Settings menu of the app. Just head to Settings > General, and there you will find the option to disable it. Alternatively, users will also be able to choose whether to have the feature when on a WiFi connection, as it can suck the mobile data by automatically playing videos. In the Settings menu of the app, users will find the option “Only on WiFi” to save valuable mobile data.

We think that this new feature may not appeal to every user. Admittedly, not everyone is a fan of autoplay feature on YouTube either. But we have to cut some slack for YouTube as it is continually trying to improve the overall functionality of app and web version of the platform. Earlier this year, YouTube added three-second previews of the video when hovered on the thumbnail, on the web version.

For now, the new “Play as you browse” feature is not available on all devices. YouTube is still testing the feature on select devices and will roll it out soon for all.