For 2015 smartphone launches, the leak saga just doesn't seem to end over the past couple of days. After we've seen images of nearly every device out there, the circle continues, and today, we've managed to get our hands on some purported images of what appears to be the Xiaomi Mi5. Xiaomi's expected to launch the device later this year, possibly in November, and by the looks of things, the Mi5 appears to be almost finalized. 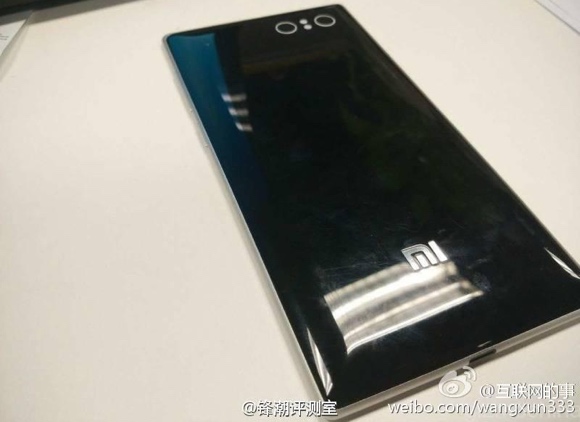 Today's images seem to confirm what we've been hearing about the past couple of weeks for the Xiaomi Mi5. According to a leaked image, courtesy of China's Weibo, the Xiaomi Mi5 can be expected with a dual camera setup on board. Several Android makers have experimented with the setup in the past, the most notable of them being HTC and Huawei. And looks like Xiaomi's eager to join the pack as well, if this image turns out to be correct. Apart from the dual camera setup, the Mi5 resembles its predecessor very closely when it comes to overall design language. The same rigid, strict language is followed in the Mi5, with its sharp edges and flat structure.

Aside from the dual camera setup purportedly revealed today, the Mi5 is also expected to come with a variety of other features. The first of these is Qualcomm's Snapdragon 820, which is so far reported to come with its own set of four, custom Kryo cores, lessening the chip maker's reliance on ARM's designs for flagship SoCs. In addition, the Mi5 is also expected to come with a hefty 4 GB of RAM and a 3,030 mAh battery. Two storage options will be available for the device, of 16 and 64 GB. You can read about the Mi5 in detail over here. Stay tuned and let us know what you think in the comments section below.