Monolith and Nintendo have just let loose a number of new screenshots in addition to a new trailer for Xenoblade Chronicles X. For those that don't know Japanese, we have them all after the break. 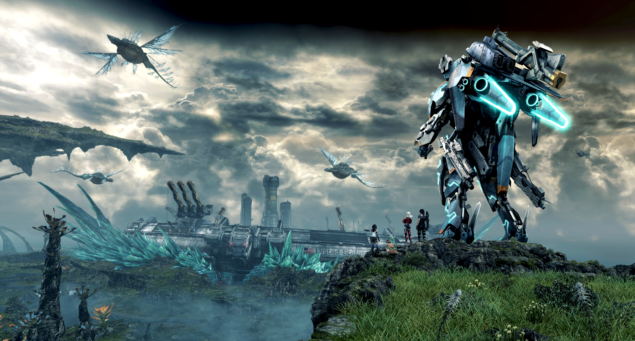 The screenshots are small, but show a number of important things in the game. They highlight the Arms Companies that will be there to provide a support role while adventuring, and they also show off two alien races that will be featured in the game.

The new trailer lets us look at how the battle system will actually work, and it looks spectacular. The animations look smooth and the whole action sequences seem to flow together to make for some great looking battles. I can't help but enjoy the gattling gun being employed, watching it tear up enemies. That and that laser sword looks might fine indeed.

So what can we expect from Xenoblade Chronicles X? A deep character driven story filled with a plethora of mech on mech action. We can expect quite a bit of action from indigenous life on Mira as well as a long and drawn-out battle with those that are still hunting you. And the Arms Companies should provide us with all the great gear that we need to make a new life.

The hype level surround the new Xenoblade game rather high, but if the previous installments are anything to go by, then I think that Monolith can deliver it. I'm hopeful, if anything. They have a wonderfully wide universe with a large mythos with which to work. So despite the daunting task ahead of them, Xenoblade Chronicles X may be a contender for the game of the year. Which year, however, we still don't know. Nintendo and Monolith are still playing coy with the release date.

Is anyone else excited about this next installment in the Xeno universe?