Xbox One X Awareness Is Much Higher Than PS4 Pro and Switch in the US, According To Nielsen Survey

The report is based on a survey, with data collected via consumer online surveys in Q1 of each year using Nielsen’s proprietary, high-quality ePanel in the United States.

Groups surveyed include general population/teens/adults aged 13+, with 2,000+ interviews among 50% male/50% female sample. Post-survey, the raw data is weighted to ensure representation of
the US general population based on U.S. Census data.

With that out of the way, according to the report, 66% of the US population recognizes themselves as gamers. This is up 2% year-over-year and 8% compared to 2013.

Gamers have also apparently moved towards consoles and mobile devices, which both saw growth in platform preference compared to last year's report while PC shrunk a bit. 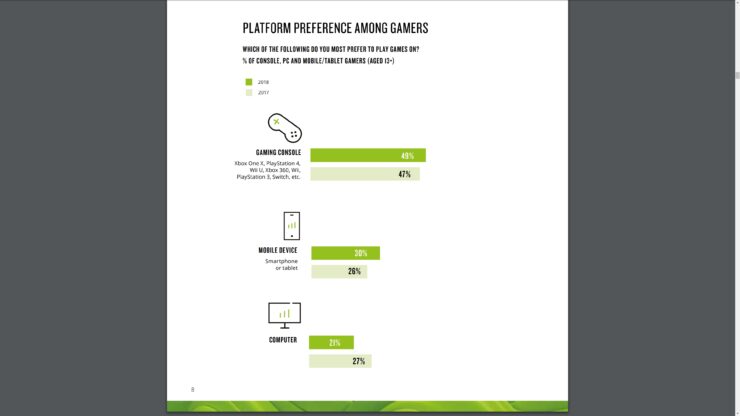 The blockbuster launch of Nintendo's Switch console, along with releases of more powerful versions of so-called 8.5 gen consoles, including Sony's PlayStation 4 Pro and Microsoft's Xbox One X, likely cut into the popularity of PC gaming. In addition, the computer's tradition as a platform for more avid garners may have contributed to its decline in the share of overall preference as new garners enter the market.
Nevertheless, the PC historically has a core group of players who passionately prefer the platform for gaming.

Another interesting slide suggests that awareness of Microsoft's Xbox One X console is extremely high in the United States, being much higher than both the PlayStation 4 Pro (but not the original PlayStation 4) and the Nintendo Switch. 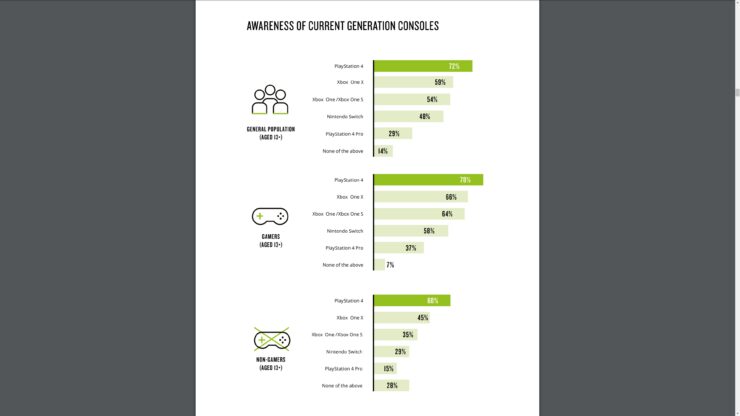 Historically, each console launch is typically supported by advertising and marketing campaigns that go into the hundreds of millions of dollars. Last year saw the release of two new consoles-the Nintendo Switch and the Xbox One X. Ads flooding mainstream channels, including Nintendo's Super Bowl advertising debut spot in 2017, have boosted awareness across garners and non-garners alike of nearly all major gaming consoles in the market. Awareness among the general population of the Nintento Switch, for example, more than doubled year-on-year, while those who have heard of the Xbox One X nearly tripled. Overall, 86% of the general population age 13 years or older in 2018 have heard of at least one of the current generation consoles, up from 82% a year earlier.

At the same time, this doesn't translate into a higher intent to buy the Xbox One X compared to PlayStation 4 Pro or Nintendo Switch, likely due to the console's higher price tag.

Other interesting tidbits from the report suggest that a gamer's average weekly playing time has largely remained unchanged at 11% of their leisure time, while console gamers still prefer to buy physical games (63%) versus digital ones (27%).