A few months back, many news outlets reported that Xbox One runs 3 Operating Systems. They further went on to claim that the one was a stripped down version of Windows 8, one was the Xbox One OS and the last was a switching layer between the two. Well they were wrong. Xbox One does indeed run three operating systems but the correct ones are: a full fledged windows 8, a stripped down windows 8 and a Host OS (RTOS). The implications for this are immediate and stunning and we will go upon each in this article. 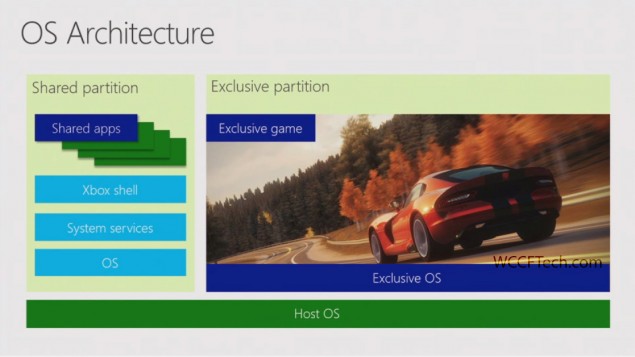 Xbox One Games and Apps Actually run on Windows 8

We recently received the slides from Frank Savage's presentation at Build 2014 along with the audio of the same. And we noticed something that many news outlets failed to report. The fact that Xbox One runs Windows 8. Not only that, but we realized that so many of the news outlets had gotten the initial leak completely wrong. Because if you run a game or an app on the Xbox One, it will either run in the full Windows 8 or  the stripped down version of Windows 8. Either way it runs on Windows 8. Let me start by explaining the three operating systems present in Xbox One.

The first tier 'Host OS' and the 'to-the-metal- operating system present in Xbox One dubbed the 'Host OS' is an RTOS (Real Time Operating System) has complete control over the entire Xbox One hardware and resources. In Frank Savage's words "... owns where everything and how everything works.... owns CPU...GPU". This is your basic Xbox One Operating System. However the thing is , this particular OS only handles tasking and the security layer. It does not run any game or application. It does however host (in a non - hyper-v form) the 'OS' and the 'Exclusive OS', which is Windows 8 and the stripped down Windows 8.

The second tier 'Shared Partition' is occupied by Windows 8. This Operating System is "virtually indistinguishable" from the Windows 8 we know (and love?) , code wise. This particular Windows 8 handles all the basic functions of the Xbox One  including the shell. Shared Apps are run here. It handles some major features of games such as networking and some audio.

The third tier 'Exclusive Partition' is the Exclusive OS, which in Frank Savage's words is a "windows 8 that has gone on a massive massive diet...... lean and mean windows 8". It has been hand tuned to remove any and all bottlenecks as well as bloatware. However this is the part which defines it as a 'partition' and not a virtual machine. All the Direct X draw calls go straight from the Exclusive OS down to the Host OS. It does not go through the full windows 8 ' shared partition'.

Basically the Xbox One is a true X86, X86-64 machine. As Frank Savage said, "any game I made ran equally well on Windows 8 (desktop) and Xbox One". The porting capability this implies is very powerful, infact, if Frank Savage is to be believed, port-lag is non existent. Just convince the devs, and you shall have the game.

#Microsoft #XboxOne actually uses Windows 8 for both Games and Apps. The Host OS or RTOS only manages resources. http://t.co/EJ6JJ2ZbWa