The first build for the World of Warcraft Shadowlands Alpha has been deployed by Blizzard and the support article for expansion’s upcoming beta has been updated.

The Shadowlands expansion for World of Warcraft is releasing later this year, and Blizzard has now shipped the first alpha build on World of Warcraft’s vendor CDN, version 9.0.1.33411. To support this new build, Blizzard also updated the Battle.net application. Unfortunately, this first alpha has been encrypted and additional details about its contents are unavailable at this point. The release of this build, however, does suggest that the alpha release might be imminent.

As of yesterday, Blizzard updated its support article for the upcoming Shadowlands Beta, and those interested in signing up for testing should opt-in through the Shadowlands website right here. “To put your name into the pool of candidates interested in beta testing for Shadowlands, sign up on the Shadowlands home page using the Beta Opt-In link at the top of the page”, Blizzard writes on the updated support page. 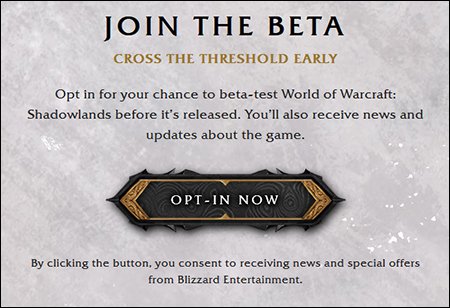 “Signing up for beta does not guarantee you will be chosen to participate, but players who have not signed up to indicate interest cannot be chosen. Customer Support is not able to provide access to beta.”

World of Warcraft players entering the fabled Shadowlands will find the realms of the dead in upheaval. Under the normal order, departed souls were delivered to a realm appropriate to the lives they led, but now, all souls are being funneled into the Maw, where the most wicked are damned to suffer for eternity. As they seek to right the cycle and uncover the extent of Sylvanas’ designs, players will forge bonds with the Covenants who hold domain over different planes within the Shadowlands.

“Shadowlands is taking us somewhere we’ve never dreamed of going in the Warcraft universe, and that’s incredibly exciting,” said J. Allen Brack, president of Blizzard Entertainment. “We can’t wait to explore the great beyond, catch up with old departed friends, and forge an epic new chapter in the Warcraft saga together with our players.”

Blizzard Details World of Warcraft Shadowlands Pre-Patch 9.0.1 Ahead of its Release