Intel's 6th generation Skylake processors are expected to make debut on 5th August and while we know little about their architectural enhancements, we do know quite a lot about the platform and SKU details. Powering the Skylake platform is the high-end Z170 chipset which will be integrated on LGA 1151 socketed motherboards that are going to support the first line of unlocked processors, the Core i7-6700K and Core i5-6600K.

We have seen several Z170 chipset motherboards at Computex from MSI, ASRock, Gigabyte, Colorful, EVGA and Biostar. The only motherboard which ASUS showcased was the Z170 Pro but today, we get to see three new motherboards. These include the ASUS ROG Maximus VIII Hero, ASUS Z170 Deluxe and ASUS Z170 Pro Gamer. These three motherboards will be part of the initial lineup as more Z170 boards will be introduced that will include the ROG Maximus VIII Formula/Impact/Gene-Z/Ranger series and the Sabertooth Z170.

Expansion slots include three PCI-e 3.0 x16 slots, four PCI-e 3.0 x1 slots  and a single M.2 Ultra slot. For storage, ASUS has featured 8 SATA III 6 GB/s ports and a single SATA Express 16 GB/s port. There are several switches and buttons laid out on the board, we can't tell what specific functions do they serve however, they could be used for overclocking and turning on/off the expansion slots, DIMM slots and switch between the dual BIOS on the board. There's a single USB 3.0 header and two USB 2.0 internal headers. A large white heatsink is integrated on top of the power phases for adequate cooling that can dissipate heat through a single heatpipe that runs through the three sets while a single PCH heatsink bearing the ASUS logo keeps the Z170 chip cooled.

The ROG Maximus VIII Hero and Z170 Pro Gamer are also launching however not all exact details are know for these boards as the images are not as much detailed. The Z170 Pro Gamer has a black and red color scheme and has two large heatsinks cooling off the Digi+ VRM. The LGA 1151 socket is powered through a single 8-Pin connector while four DDR4 DIMM slots offer support of up to 64 GB ram capacity. Expansion slots include three PCI-e 3.0 x16, three PCI-e 3.0 x1 and a single M.2 Ultra slot. The Maximus ROG series on the other hand reaches its eight iteration with the Maximus VIII series parts on Skylake CPUs. 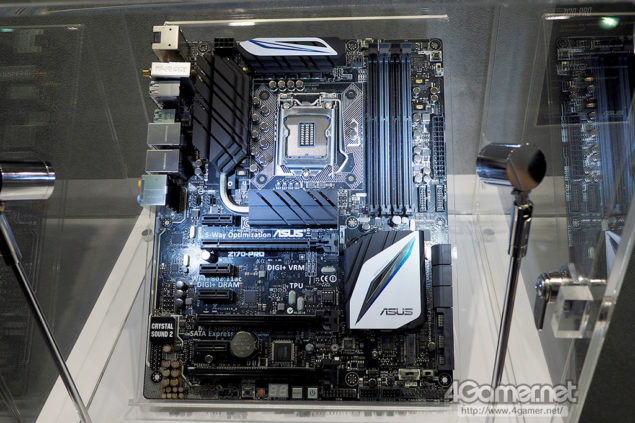 The ASUS Z170-Pro motherboard also adopts a similar design scheme as their X99 motherboards. The ASUS Z170-Pro is a high-end product and comes just below the ASUS Z170 Deluxe that will launch along with Skylake processors. We can see that the CPU socket is powered by a 8-Pin power connector and the board adopts a 16 Phase DIGI+ VRM design. The entire PWM section is covered by large heatsinks that are interconnected through a single heatpipe to dissipate heat effectively. Next to the CPU socket are four DDR4 DIMM slots which can support 64 GB capacity of DRAM with frequencies up to 3400 MHz (O.C+).