Microsoft's next operating system, Windows 10, is different in quite a lot of ways when compared to its predecessors, particularly Windows 8 and 8.1. For starters, the software giant has decided to bring back the beloved Start Menu in its soon to come Windows update - albeit with a couple of metro style upgrades. Not only this, but Windows 10 will be the debut of Microsoft's virtual assistant Cortana for the PC platform. Cortana on Windows 10 will be able to perform a significant variety of tasks on the system including setting up your schedule, showing the weather and enabling a better browsing experience, through integration with Microsoft's all new web browser, Cortana. 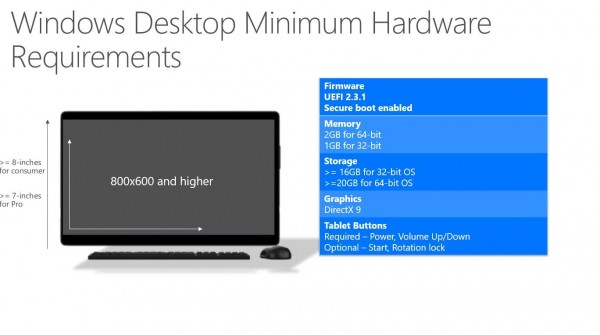 But while Windows 10 will be vastly redesigned platform when compared to Windows 8, its PC and other platform requirements do appear to be mostly the same when compared to its predecessor. The minimum requirements for Windows 10 on a desktop can be seen in the image above. The 64 bit version of the OS will require 20 GB of free space on your drive, while the 32 bit version requires 10 GB. The RAM needed for 32 and 64 bit variants of the operating system is 1 and 2 GB respectively. In resolution terms, minimum resolution for Windows 10 Consumer and Pro will be 800 x 600. In addition, DX9 has also made it on board. Screen size for Consumer and Pro will be 8 and 7 inches respectively.

Microsoft's also added support for a host on new processors on Windows 10. These can be spotted above, and include Intel's Cherry Trail and Skylake and AMD's Carrizo and Carrizo-L APUs. And while UEFI 2.3.1 boot has been enabled, whether its a requirement for Windows 10 to be booted using the firmware isn't known so far. Other requirements for Windows 10 can be seen in the slides below, which include components for both mobile and desktop versions of the software. So take a look below and let us know what you think in the comments section.