The Watch Dogs 2 PC performance benchmarks are in from various tech sites such as Computerbase and PCGameshardware. The results give us a good look at how NVIDIA and AMD based GPUs perform in the latest open-world AAA title from Ubisoft.

Watch Dogs 2 was launched on consoles earlier this month and received really good reviews. The PC release came in yesterday and adds a lot of graphical improvement over gaming consoles. Some of these enhanced features include higher graphical fidelity through the use of high-resolution 4K textures, ray-marched volumetric clouds, uncapped frame rates, multi-monitor support and FOV sliders.

Aside from these, Ubisoft has also been collaborating with NVIDIA to add GeForce features which include HBAO+, HFTS, PCSS, TXAA and ANSEL. GeForce users would also benefit from NVIDIA DSR, Gamestream, GeForce Experience Share, SLI and Surround technologies in Watch Dogs 2.

So talking about the game itself, we are based in a virtual yet realistic recreation of San Francisco. We take on the role of Marcus Holloway who works with the hacking group known as DedSec to take down the city-wide CTOS system and the people behind it. The game is jam packed with hacking tools and gadgets and does get pretty intense as the game progresses.

Before taking a look at performance numbers, users who have purchased the game on PC should know that AMD and NVIDIA have launched the latest graphics drivers with Watch Dogs 2 support. The drivers are now available to download from the respective websites. Users should download and install the latest drivers for best experience and optimizations in Watch Dogs 2. Download links are given below: 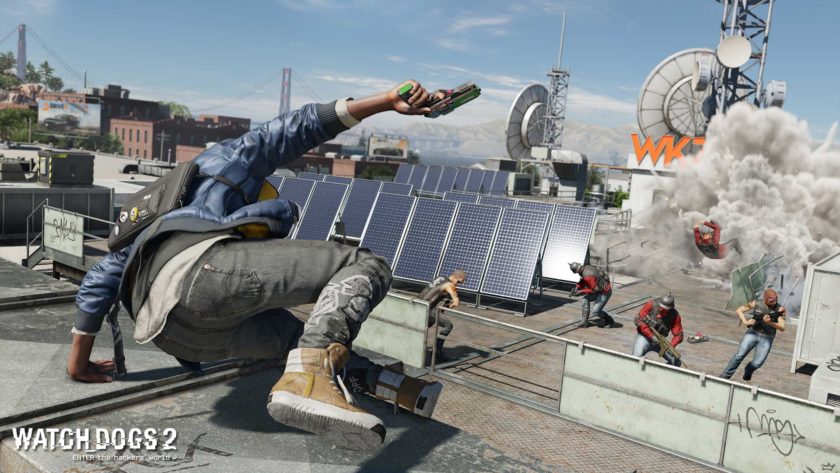 The Watch Dogs 2 PC Benchmarks - What Do You Need To Play The Game?

Watch Dogs 2 is a really graphics intensive title and features an open-world settings which requires lots of geometry and texture rendering performance. Following are the requirements needed to run Watch Dogs 2:

The game uses a feature called Temporal filtering which in its latest revision, increases the performance output while avoiding any kind of IQ deficit.

If you're interested in graphics technology, you've probably heard a lot of talk about "checkerboard rendering" in relation to the PlayStation 4 Pro in recent weeks. This new, upgraded PlayStation 4 is promoted as being capable of 4K graphics, and given a lower-fidelity game it most certainly is. In high-fidelity games, however, it has to use a clever workaround called "checkerboard rendering" to achieve a higher-resolution image without tanking the framerate.

In simplified terms, checkerboard rendering upscales the resolution from 1920x1080 to 3840x2160, and uses data from the previous frame to create new detailed pixels that fill in the blanks between the pixels that were upscaled, avoiding the blurriness that would otherwise occur. The result is then further improved with other techniques, and smoothed out with anti-aliasing. 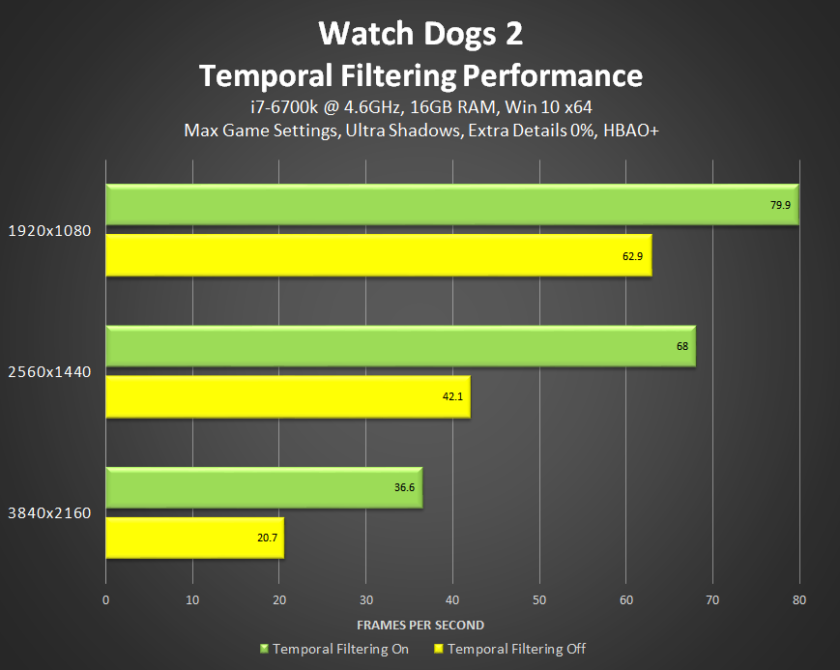 This same principle was already achieved in a similar fashion in last year's Rainbow Six Siege, which introduced us to what Ubisoft calls "Temporal Filtering". This first-take on the idea rendered the same number of depth samples as a full-resolution 1920x1080 picture, but only a quarter of the shaded samples, improving performance at the expense of image quality. This manifested as a reduction in the quality and visibility of Ambient Occlusion shadowing, increased shader aliasing, decreased lighting and shading fidelity, and a loss of fidelity on smaller game elements, such as leaves, grass, visual effects and minute pieces of geometry.

In the year since Ubisoft has greatly improved their implementation of the technique, avoiding almost all of the previously-observed pitfalls. Such is the level of improvement, in fact, and the performance of the game with Temporal Filtering enabled, you can increase the resolution from 1920x1080 to 2560x1440 whilst simultaneously benefiting from a faster framerate and improved image quality.

Following are some of the features that can be disabled or lowered for improved performance in Watch Dogs 2. List courtesy of GeForce.com!

Computerbase concludes that current generation GPUs such as NVIDIA's Pascal and AMD's Polaris perform really well in the game compared to their predecessors. The GeForce GTX 1080 leads the benchmarks while the Fury X manages to perform just around the same as a GTX 1060 (at most with a 4 FPS lead). The Radeon RX 480 shows better performance than the Radeon R9 390 and at $199 US, it's a really impressive feat for the Polaris 10 based card.

Overall, we can see that Watch Dogs 2 is a graphics hog that demands a lot of power over 1080P resolution. The game looks great and has a great story line backing it. Newer cards such as AMD's Polaris RX series and NVIDIA GeForce 10 Pascal series offer the best performance in the game but Maxwell and 300 series can still play the game at 1080P and 1440P resolution with a few graphics tweaking.