Ubisoft was the first company to start this always connected to the internet DRM (at least I think so) but now Capcom is following suit, when news of Super Street Fighter 4 coming to the PC was announced I assumed that the worse form of DRM I would have to face would be GFWL, but sadly I am wrong again. Capcom has made it so that players who buy the game will not be able to enjoy it offline

Now, on the security side of things, SFIV unfortunately was plagued by pirates and hackers that messed up leaderboards. To hopefully remedy that, SSFIV:AE will be making use of what is called SSA technology (similar to what we used in Dead Rising 2). Like Xbox Live, players will sign in when they launch the game. You must have a Games for Windows Live account (which is free) in order to get full access to the title. If you already have an Xbox Live silver or gold account, those would work too and your achievements would be added/displayed in your usual gamescore.

Inevitably the question is: if you happen to temporarily lose your connection in the middle of your session (let’s say you’re working on combos in the training room or working on challenges), no problem. You’ll be able to keep doing what you’re doing until you come to a logical break point, like exiting to a menu, at which point you’ll be asked to sign back in. Assuming your PC is back online, everything will continue as it should, just like on Xbox 360.

If you aren’t signed in to an online GFWL profile, the offline mode has limited functionality. Obviously there’s no online play, access to replay channels or other online-centric features (and this is the part that keeps the online play secure from hackers or pirates). Additionally, you won’t be able to save any progress in challenges or settings, won’t have access to any DLC you’ve purchased and all local play will be restricted to 15 of the 39 characters.

layman terms? if your net goes say during an arcade game you WILL still be able to play the arcade mode but once you return to the main menu you will HAVE to sign back into GFWL and continue, alternatively if you choose to NOT run GFWL at all you will only have access to 15 / 39 characters. So let's say your internet is unstable or is undergoing maintenance and you are in the mood of playing your recently bought SSF4 Arcade Edition, well you will be very crippled in terms of fighters, your progress won't save AT ALL, no access to any DLC or ANYTHING. Capcom sure knows how to enforce a DRM no? Surely this kind of DRM is getting a tad bit ridiculous isn't it? it's companies like this which encourage pirates to crack their games. I am just glad I get to skip this whole DRM crap by playing the game on my PS3.

In the end all I have to say is: 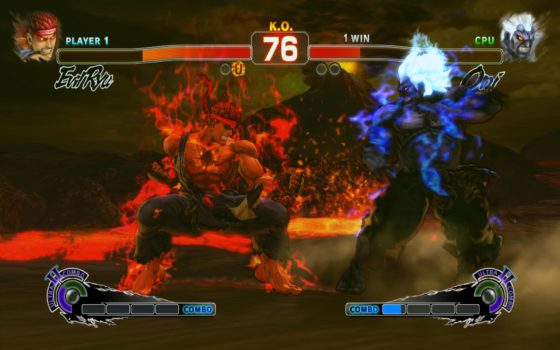 Evil Ryu does not find the new DRM very nice AND HE IS PURE EVIL!