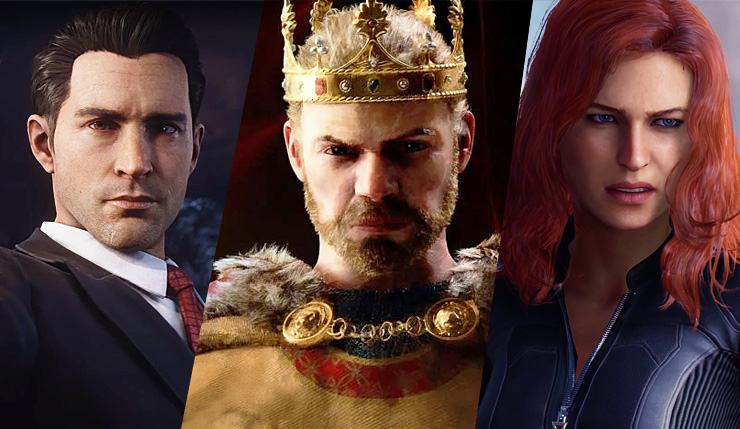 That said, here are the games you should be looking out for in September…

Tired of ordering troops around in strategy games? The Crusader Kings series largely ignores the military stuff in favor of glorious Games-of-Thrones-style scheming and backstabbing. Crusader Kings III is complicated, but I found it to be engrossing and surprisingly accessible in my full review...

You can grab Crusader Kings III at a discount from Green Man Games.

After a couple delays, Marvel’s Avengers finally arrives this month. Reaction to the game’s off-brand-looking heroes and combat mechanics has been mixed, but Square Enix and developer Crystal Dynamics have clearly poured a ton of blood, sweat, and tears into this game. Marvel’s Avengers has been packed with fan service and features a ton of different modes and challenges between it’s single-player and “Avengers Initiative” live-service component. Perhaps wait for reviews, but feel free to start assembling your excitement now. Pre-order the game here.

NBA 2K laces ‘em up for another year. NBA 2K21 falls in a transition year between console generations, and yet, developer Visual Concepts seems to be adding a fair amount to the formula. The game’s shooting mechanics have been overhauled, the My Neighborhood social hub has been redone, and MyTeam has a number of new features. Of course, it should be mentioned that the version of NBA 2K21 coming out this month is only the current-gen version (this includes the PC version). It will be interesting to see what NBA 2K21 is like on Xbox Series X and PS5. Pre-order the game here.

The Birdman’s back! Tony Hawk’s Pro Skater 1 & 2 is exactly what it sounds like – the first two games in the legendary series redone with all-new visuals. Of course the rail grinding, park designing, and the classic soundtrack are back, and some new skaters, tricks, and online modes have been added to the mix. Y’know, I have a feeling a few people might be eager to skate back to a time when 2020 still felt like a distant and promising future. Pre-order the game here.

The latest creation of Vanillaware and George Kamitani (Odin Sphere, Dragon’s Crown) 13 Sentinels: Aegis Rim first began development all the way back in 2013. The game finally released in Japan in 2019 to rave reviews (both Smash Bros. creator Masahiro Sakurai and NieR creator Yoko Taro are big fans), but then the wait for a Western localization began. Thankfully, the unique visual novel/strategy hybrid is almost here! 13 Sentinels looks absolutely gorgeous and is guaranteed to be unlike else released this year. Pre-order the game here.

The Mafia games have never quite got the respect they deserve, but this full remake of the first game in the series could very well change that. Mafia: Definitive Edition preserves the original game’s Godfather-inspired rags to criminal riches story, but modernizes the graphics and gameplay to be a little more palatable to modern audiences. Hopefully 2K and developer Hangar 13 have cooked up an offer players won’t be able to refuse. Pre-order the game here.

Paradise Killer is a colorful new open-world detective game, that kind of looks like a mashup between Danganronpa and old-school adventure games like Myst. You play as  Lady Love Dies, an “investigation freak” who must solve a series of murders on an island occupied by aliens, demons, and other strange characters. Despite the wackiness, you’ll have to do some surprisingly in-depth detective work, building an airtight case that has to stand up at trial. If you ever wanted to know what Matlock might look like on acid, well, here you go. Here’s the Steam page for Paradise Killer.

Star Renegades is a new RPG featuring a gorgeous 2D-3D hybrid art style that’s quite unlike anything I’ve seen before. The game also includes some interesting mechanics, including a procedurally-generated story and missions and something similar to Middle-earth: Shadow of Mordor’s Nemesis system that creates unique baddies that will evolve as you play. No doubt about it, this one’s ambitious. Here’s the Steam page for Star Renegades.

Are you still holding out hope for a follow up to Rare’s Jet Force Gemini? If you answered “yes,” you’re on a short list, but believe it or not, it’s actually happening! Tamarin is a new third-person action-platformer in which you splatter armies of evil ants being made by a variety of ex-Rare devs who worked on games like Jet Force Gemini, Banjo-Kazooie, Battletoads, Diddy Kong Racing, GoldenEye 007, and Donkey Kong 64. The N64 kid in me in all aquiver! Here’s the Steam page for Tamarin.

Spelunky is one of the landmark indie titles of the past decade, and along with Dark Souls, was the game that really spawned the current fascination with roguelike mechanics. Needless to say, the expectations are high for Spelunky 2, but it seems like the game may just meet them. Expect much bigger, more complex worlds, some interesting tweaks to old mechanics, and expanded multiplayer options. Time to get digging! Here’s the PlayStation Store page for Spelunky 2.

Going Under is a new dungeon crawler, but don’t expect any dank caves or caverns. Instead you’ll be battling through the colorful offices of a failed tech startup. Wield stolen office supplies as weapons, battle your obnoxious bosses, and make friends with fellow prisoners of this hellish corporate landscape. Seems like the perfect game for unwinding after work. Here’s the Steam page for Going Under.

And those are the games you should be keeping an eye on this coming month. What games are you planning to pick up in September? Did I miss anything you’re looking forward to?