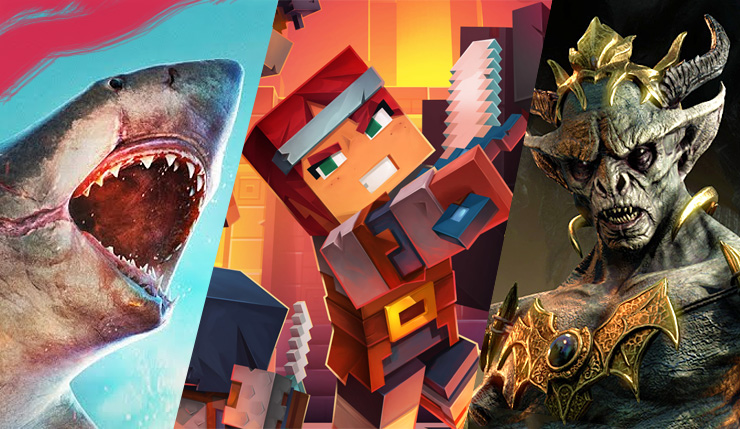 May has suffered some major delays due to the COVID-19 pandemic, with titles like The Last of Us Part II, Iron Man VR, and Wasteland 3 being pushed to the summer months. That said, a few promising games are still slated May, including Minecraft Dungeons, Maneater, and The Elder Scrolls Online’s big Greymoor expansion. There are also some indie standouts on the way, including the “Left 4 Dead with dwarves” co-op romp Deep Rock Galactic, and the stylish cyberpunk adventure game VirtuaVerse.

Have you ever found yourself sympathizing with the shark while watching a Jaws movie? Well then, this one’s for you. Maneater lets you gobble up hapless beachgoers with abandon, but developer Tripwire Interactive is also promising a surprising amount of depth, as the game features a large semi-open aquatic world and the ability to grow and upgrade your mutant shark. The game is certainly visually impressive, as it uses Unreal Engine 4 and detailed real-life scans to create realistic underwater environments. Maneater ought to be worth sinking your teeth into. Pre-order from GameStop.

While we don’t usually cover DLC in these articles, The Elder Scrolls Online: Greymoor expansion should be as big, or bigger, than most standalone games. The fourth major expansion for ESO, Greymoor finally adds areas from Skyrim, although you’ll be looking at them through new eyes. Greymoor takes place 1000 years before Skyrim, and players will be facing off against an army of creepy vampire bat creatures. Greymoor is probably The Elder Scrolls Online’s biggest expansion yet and a good jumping on point for folks who loved Skyrim, but are leery about trying an MMORPG. Pre-order from GameStop.

The most popular game of all time gets a new spinoff! Essentially Diablo for the younger set, Minecraft Dungeons actually looks very promising, featuring fast, fluid action and some nice stylized visuals. Original series creators Mojang are putting their full weight behind Minecraft Dungeons (unlike some past spinoffs), so it shouldn’t be overlooked or written off. Pre-order on the Microsoft Store.

One of the most underrated JRPGs of the past decade is set to make its triumphant return. The original Xenoblade Chronicles was a massive, beautiful RPG, featuring a positively bonkers twist-filled story, but almost nobody played it as it launched late in the Wii’s lifespan. Xenoblade Chronicles: Definitive Edition sharpens up the game’s visuals, replaces the original somewhat-ugly character models, and adds an all-new epilogue. Grab this one and you’ll have something to keep you busy all summer. Pre-order from GameStop.

Just can’t wait for Cyberpunk 2077 to launch later this year? Well, you can get a taste of our potential neon-drenched future with VirtuaVerse, a new point ‘n’ click adventure game that looks to take inspiration from classics like Beneath a Steel Sky. In the world of VirtuaVerse everybody in the world is connected to Matrix-like neural network, but you’ll have to disconnect in order to solve the disappearance of your girlfriend. Here’s the Steam page for VirtuaVerse.

Deep Rock Galactic is the latest in a long line of Left-4-Dead-style 4-player co-op games, albeit with a pretty big twist. Instead of battling zombies, you play as a pack of burly space dwarves who search alien caverns for treasure. The game’s procedurally-generated caves are fully destructible and you can craft all sorts of useful weapons and gadgets, giving the game a unique edge. This one’s been available via Early Access for a while, and the response has been very positive, so don’t be afraid to jump in! Here’s the Steam page for Deep Rock Galactic.

Timelie is a stylish new isometric stealth game, that lets players solve puzzles by winding time backward and forward. Of course, there have been plenty of other games with time gimmicks, but Timelie seems to do some unique things with the concept, requiring players to keep track of multiple characters in order to solve puzzles. If you’re looking for a good little brainteaser that won’t eat up your life, this one looks to fit the bill. Here’s the Steam page for Timelie.

Wildfire is a 2D stealth game where your main tool is fire – glorious, glorious fire! Use elemental powers to start fires, freeze water, move earth, and summon plants in order to distract and befuddle enemies so you can sneak past them. You can also team up with a second player to really cause some chaos. This one looks like a great option for those who like to really explore and exploit a game’s systems. Here’s the Steam page for Wildfire.