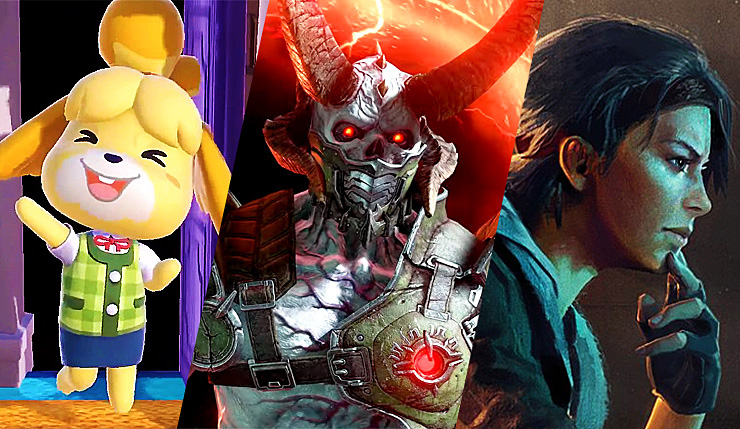 After a slow start to 2020, we’re finally starting to get a decent flow of big releases in March. These include the demon-blasting epic Doom Eternal, hard-as-nails action-RPG Nioh 2, and chill island vacation Animal Crossing: New Horizons. Meanwhile, on the indie front we have a handful of promising titles including the charming kingdom management sim Yes, Your Grace and the Mega Man Battle Network spiritual successor One Step from Eden.

Ori and the Will of the Wisps looks like it follows pretty closely in the footsteps of its predecessor Ori and the Blind Forest, but that isn’t necessarily a bad thing. Ori series developer Moon Studios has promised “Will of the Wisps should be to Blind Forest what Super Mario Bros. 3 was to the original Super Mario Bros.” Sounds good to me! Xbox fans have been starved for quality exclusive platformers over the years, so they ought to gobble this one up. Pre-order on Amazon.

Steel yourself! The original Nioh was a brutally-difficult adventure that put even From Software’s games to shame, and by most accounts, Nioh 2 ratchets up the challenge even further. But Nioh 2 isn’t all about the difficulty – it also significantly improves on the original game’s visuals, adds new abilities and weapons, and lets you customize your look with a new character creator. Nioh 2 looks to be the first must-have action RPG of 2020. Pre-order on Amazon.

How do you top 2016’s Doom, which many consider one of the best single-player shooters of all time? If you’re id Software, you go bigger in every possible way. Doom Eternal serves up a much more elaborate story that takes you to the moons of Mars, a demon-infested Earth, and both Hell and Heaven. The monsters you’ll face along the way are tougher than even before, but the Doom Slayer has also been upgraded with some new badass tools, including a grappling hook, which basically turns you into a demon-slaughtering Batman. Doom Eternal ought to be a headbanging (and head-splattering) good time. Pre-order on Amazon.

Need something to soothe your jangled nerves after binging on Nioh 2 and Doom Eternal? Nintendo’s got just the thing in the long-awaited Animal Crossing: New Horizons. This time around, you’ll have more control over your little village than ever before, as you set up on a deserted you can decorate and micromanage to your heart’s content. New Horizons doesn’t appear to do anything too daring, but Animal Crossing fans have been jonesing for a fix, and Nintendo and Tom Nook are all too happy to provide. Pre-order on Amazon.

The Half-Life series is finally making its official return…with a VR-exclusive game. Needless to say, fans have mixed feelings about Half-Life: Alyx, but Valve has promised the game is no quickie “experience” or tech demo. This is a true full-length Half-Life game, featuring everything you’d expect – shooting, story, humor, horror, and more. So far, Valve has only shown a few scraps of actual Half-Life: Alyx footage, so the question of whether this is the that elusive VR killer app is still very much up in the air, but Valve knows the expectations attached to this franchise are a sky high. They wouldn’t release anything sub-par…right? Pre-order on Steam.

The best-reviewed JPRG of all time returns with a bigger, better deluxe edition. Persona 5 Royal includes everything in the original game and adds a slew of characters, party members, sidequests, story moments, and a whole new semester at Shujin Academy to play through. If you never got around to trying the original Persona 5, this is obviously the version to get, but even P5 veterans might find themselves tempted to double dip. Pre-order on Amazon.

The Longing is a new adventure game in the same stylistic vein as Amanita Design’s mini masterpieces, but with a unique twist. You play as the servant of a subterranean king who’s gone to sleep for 400 days, and in the meantime, you just have to…wait. The Longing unfolds in real time and you can just wait 400 days to see what happens at the end, or you can use those 400 days to explore your underground world, uncovering various collectibles and secrets. Obviously, this one isn’t for everyone, but I find its “morose Animal Crossing” pitch kind of fascinating. Here’s the Steam page for The Longing.

Yes, Your Grace is a new kingdom management sim that goes beyond the sometimes-dry politics and military strategizing most games of this type focus on. Featuring charming pixel-art graphics, Yes, Your Grace almost feels like a lost LucasArts game – it looks like it’ll be good to be king. Here’s the Steam page for Yes, Your Grace.

Games like Cities: Skylines have carried on the SimCity tradition in solid fashion, but do you sometimes yearn for something a little more retro? Smart City Plan looks to provide all the depth you’d want from a good city-building sim, with a visual style that makes it look like an HD remake of SimCity 2000. As someone who whiled a way a good chunk of the 90s with SC2000, this one looks to scratch some itches. Here’s the Steam page for Smart City Plan.

Do you ever find yourself missing the Mega Man Battle Network games? Sadly, Capcom’s probably never going to make another one of those, but maybe we don’t need one as One Step from Eden is basically a new Battle Network game in everything but name. Cute anime characters, card-based battles that take place on a rectangular grid – it’s all here, with the addition of some modern roguelike elements. Here’s the Steam page for One Step from Eden.