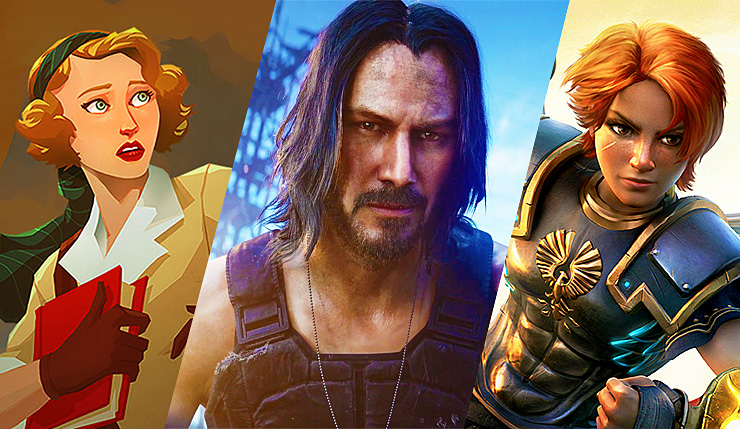 December is usually a rather quiet month when the last pre-Christmas stragglers come out, and that’s mostly the case this year, with one big exception – Cyberpunk 2077. Yes, CD Projekt Red’s much-anticipated (and delayed) epic finally arrives in just a few days, although that’s not all there is to look forward to this month. Immortals Fenyx Rising, Dontnod’s latest narrative adventure Twin Mirror, and more also call December home. On the indie front, you can look forward to quirky co-op platformer PHOGS! and the charming chillout experience Alba: A Wildlife Adventure, just to name a few.

That said, here are the games you should be looking out for in December…

Twin Mirror casts players as Sam Higgs, an investigative journalist with an uncanny ability to recreate the details of a crime in his mind. Unlike most other recent Dontnod titles, Twin Mirror will be released all at once, rather than episodically, and looks to be more “gamey” than some of their recent very-story-driven output. Whether this approach pays off for Dontnod is a mystery that’s yet to be solved, but as a fan of the studio, I’m glad to see something a little different. Pre-order the game here.

Ubisoft’s Greek-Mythology-themed adventure Immortals Fenyx Rising is pretty obviously cribbing notes from Zelda: BOTW, but hey, why not copy from the best? Wccftech’s Francesco De Meo found Immortals to be a solid take on the formula in his full review…

Despite a lack of innovation, Immortals Fenyx Rising is a great open-world game featuring a light-hearted, humorous tone, great combat, tons of content, and a well-designed main quest. It's also reminiscent, in a good way, of 3D puzzle games from the PlayStation 2 and GameCube era. Sure, the game does suffer a bit from the usual Ubisoft open-world design bloat, but do not let this put you off.

Looking for a console exclusive to play on your new Xbox Series X or S? Call of the Sea may be your best bet this year. A BioShock-style first-person adventure game (albeit without combat), Call of the Sea is set in the 1930s and casts players as the intrepid Norah Everhart, who is searching for her lost husband on a mysterious tropical island. The game’s visuals are certainly rich and colorful – here’s hoping it delivers a mystery to match! Pre-order the game here.

And here it is, the most anticipated, debated, controversial, and potentially-groundbreaking game of the year. Cyberpunk 2077 has suffered a number of delays, but barring any last-second disasters, it seems like its December release date is going to stick. Will the game live up to the hype? That would be almost impossible, but make no mistake, the game’s gorgeous, its character building looks satisfying, and it’s pretty much a lock Night City is going to be the most complex single RPG locale ever created. This is one of those games you have to buy just to be in on the conversation. Pre-order the game here.

Do you love classic Bomberman games? Of course you do, who doesn’t? Unfortunately, actual Bomberman games have felt a little soulless for a while. Enter Ponpu, which looks to freshen up the Bomberman formula with some new mechanics and a slick hand-drawn art style. Oh, and yes, don’t worry…there is a (local or online) multiplayer mode. Here’s the Steam page for Ponpu.

There have been a number of strategy games over the years about colonizing Mars, but Per Aspera looks like a solid new addition to the sub-genre. The thing that really seems to set Per Aspera apart is scale, as you’ll be able eventually turn the entire red planet green via terraforming. The game also features more story than you might expect, with an all-star voice cast including Troy Baker, Phil LaMarr, Laila Berzins, and more. Here’s the Steam page for Per Aspera.

PHOGS! follows in the floppy footsteps of Octodad and other games that let multiple players control a single character at once. In this case, you and a friend can control either end of a two-headed canine seemingly inspired by the classic Nickelodeon cartoon CatDog. Despite the quirky concept, PHOGS! looks to be a surprisingly full-fledged platformer, featuring 24 levels to play through. Oh, and yes, you can dress up your double-headed doggo with a variety of hats. Move aside Cyberpunk 2077, we have a new game of the month. Here’s the Steam page for PHOGS!

Alba: A Wildlife Adventure is the latest project from Ustwo Games, which previously developed the acclaimed mobile puzzle games Monument Valley and Assemble With Care. This is easily Ustwo’s most ambitious game yet, as they leave behind the quaint puzzles in favor of a full 3D island to explore. Wander around a Mediterranean paradise as the inquisitive young Alba and organize citizens to help animals and keep the island pristine. The perfect sunny chillout game for what’s sure to be a long, tough winter! Here’s the Steam page for Alba: A Wildlife Adventure.

And those are the games you should be keeping an eye on this coming month. What games are you planning to pick up in December? Did I miss anything you’re looking forward to?