Etherium – The Upcoming RTS Will Be Released On March 25th

Etherium is the upcoming Sci-fi real-time strategy (RTS) game from the developer behind Stellar Impact, Tindalos Interactive. Etherium was announced back in early 2014, and since then there's only been sporadic updates from the game, and the steam community-page has seen a few threads with people wondering when the hell it's actually coming out, ever since you could pre-order it last December. But now we have a release date, and it's in less than two weeks. 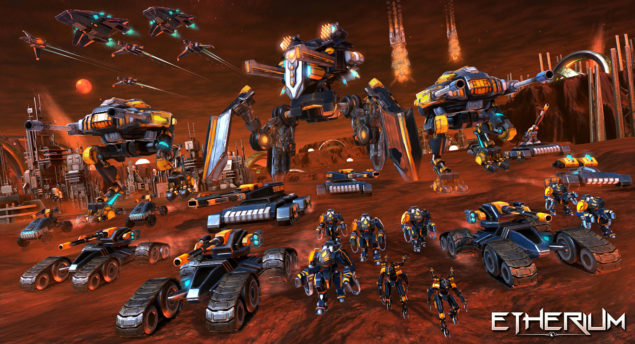 With the announcement of the release date, the developers have released a new video, detailing some of the features in the Singleplayer 'Conquest' mode, where the 3 factions - The Consortium, The Intari and The Vectides - fight across a galaxy to control the deposits of the resource 'etherium'.

In Etherium, three empires are engaged in a merciless struggle to control a handful of planets that contain rich deposits of etherium, a mysterious resource coveted by all. In the multiplayer or solo campaign modes, you lead one of these three factions, each with its own characteristics, strengths, weaknesses, technologies and special abilities, and engage in titanic battles to gain total control of the etherium!

The game itself looks very interesting, especially the Conquest mode. Since you have the overlaying turn-based meta-game (much like in Total War) where you send your fleets around to the different planets and the need to take care of research and tech on the overlaying campaign. These technologies carry over to the actual RTS battles, meaning that when you do invade a planet from the campaign map, you will have access to the specific units you have researched in the meta-game.

The three, non-linear solo campaigns in Etherium (one per faction) are dynamic, and you are free to plan your strategic conquests: with each turn you can develop your tech tree to access new structures and units, unlock new skills and decide which planet will provide the setting for your next RTS mission. It may be more advantageous to conquer certain territories, but these will also be better defended. You will also have to stop the enemy from recapturing the planets you have conquered! Your ultimate objective is simple: remove the two enemy factions from the deposit planets to gain total control of the etherium! Every match will be different, and the methods you use to achieve your ends will vary, guaranteeing great game longevity in the solo campaigns in Etherium.

Etherium will release on March 25th, and is available for 10% off as a pre-order over at Steam, and this will cost you 26.99$