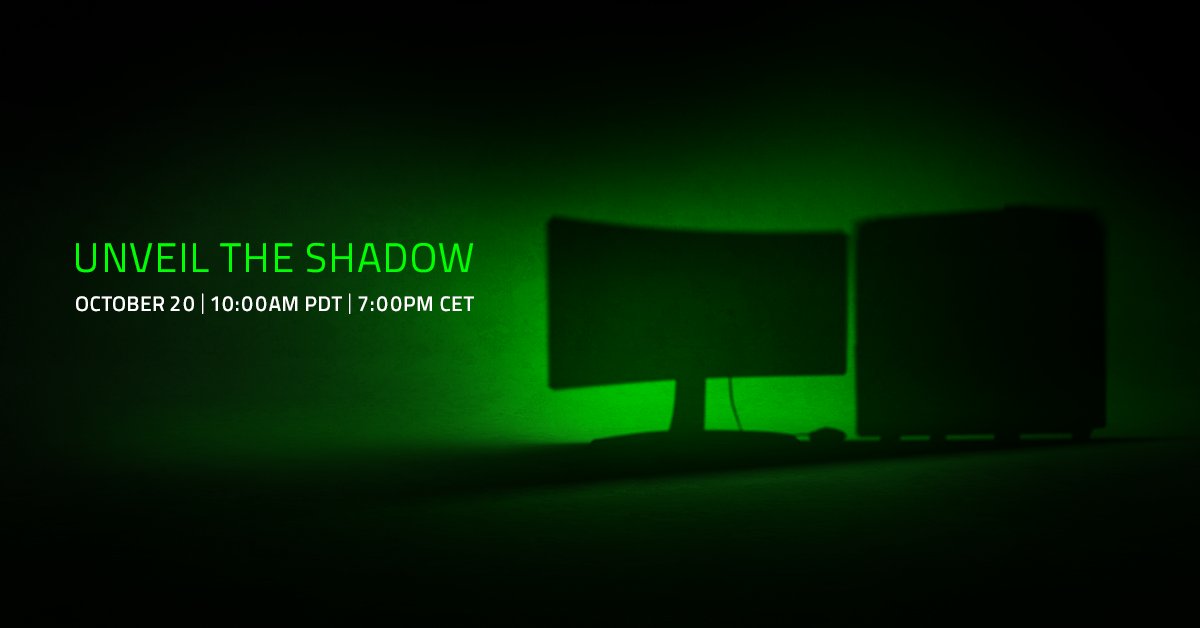 The shadow is unveiled...

Min Liang Tan is a nice guy. The Co-founder, CEO and Creative Director of Razer is a friendly and affable chap. I’m sitting opposite him as the first appointment of his European road trip and the first person outside of Razer (I’m told) to see the “Shadow” which is getting unveiled. I also have an even better presentation than all the journalists meeting Min after me because Brad's (from the US office) flight was delayed and he was going to do part of the presentation today, so instead I have the CEO himself giving me the entire presentation. Brad arrives towards the end of the meeting so I allow myself a small hidden fist pump that I got the full Min experience whereas the other journos won’t.

Yes, it’s a major announcement by Razer for a European product launch which isn’t just getting the US leftovers and hand me downs which have already been announced coming over here (the updated Razer Blade Stealth and Razer Blade).

So why, despite all of this am I slightly aghast at what has just occurred?

Well, for starters, it’s not the 1st of April and although there was a rather obvious pedestal at the front of the meeting room with a velvet cloth thrown over it, Min has just told me that Razer is making its first desktop!

My heart skips a beat as I imagine the Project Christine concept, the ridiculously ambitious and innovative, modular desktop which Razer unveiled at CES a couple of years ago. I glance nervously down at my notebook with question topics to ask Min about after he’s finished presenting to me. The topic in third place leaps out at me from the page: “3. Project Christine?” 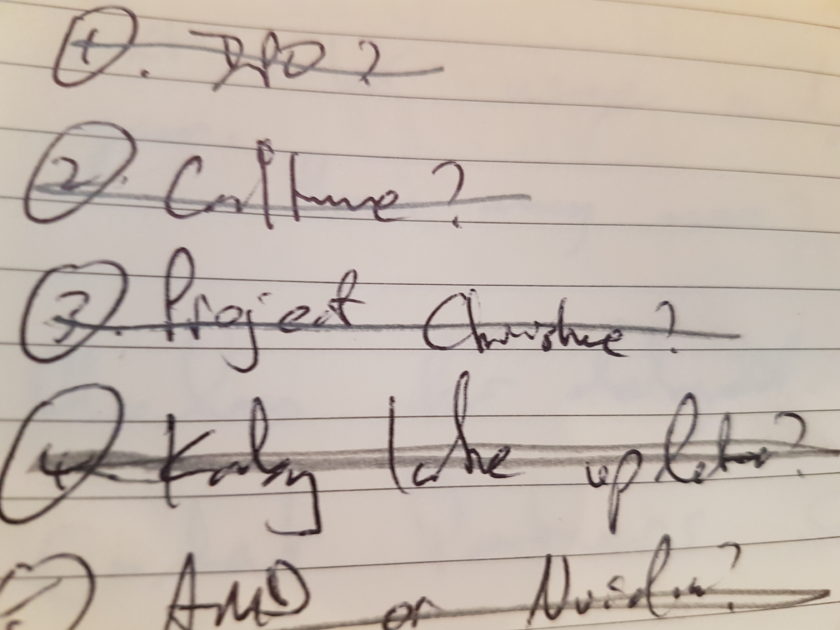 He gets up and pulls back the covering and stands there grinning at the fact that I clearly believed him and his trick worked, because under the cloth, is none other than a beautiful looking large chassis, but still thin laptop.

I can’t imagine what my face looks like, I’ve already seen two Razer Blade laptops today (the Stealth and the Blade, read about them here), a third makes sense but I was obviously hoping for something different. The Razer Blade Pro has been around for a while and it stood to reason that there would be an update to it too, but it always struck me as a bit of an oddity before. The Pro was something more akin to what I viewed as a traditional gaming laptop as opposed to the other Blades. A large 17” form factor which makes no real concessions to portability and yet only had a 960M despite the smaller Blade having a 970M GPU.

Hmm, so what do we have here? Min explains to me that they wanted to have a major product launch in Europe, not just news that Europeans would finally be able to get the Blade Stealth and Blade. This is it, the new Razer Blade Pro is launching, and it’s a bold claim they’re making. The first slide Min shows me after the unveiling is the now traditional “Don’t touch me you filthy casual” meme below and goes on to explain that this is the first laptop that can truly be called a desktop replacement. 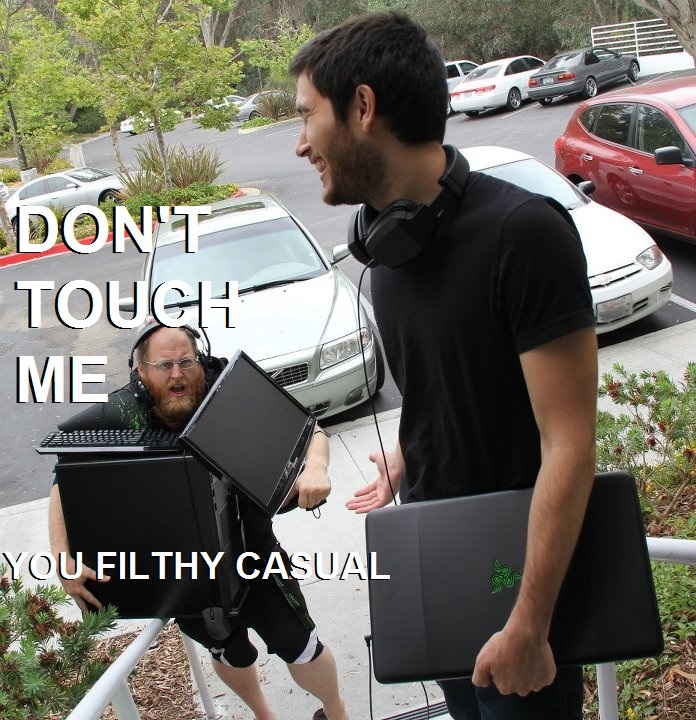 Min aims to do away with this...

Personally, I’m sceptical. Laptops are great and useful machines. But everyone knows what the phrase “Desktop Replacement” means: heavy, large dimension, ungainly pieces of equipment which although they give you a good degree of the capability of a desktop, never really manage to compete at the top end. Usman refers to them as "luggables" and it's a fitting word, most of the time...

So let’s take a look at the machine. Min tells me the objective here is to do away with the filthy casual tag so let’s see how they’ve tried to go about that. 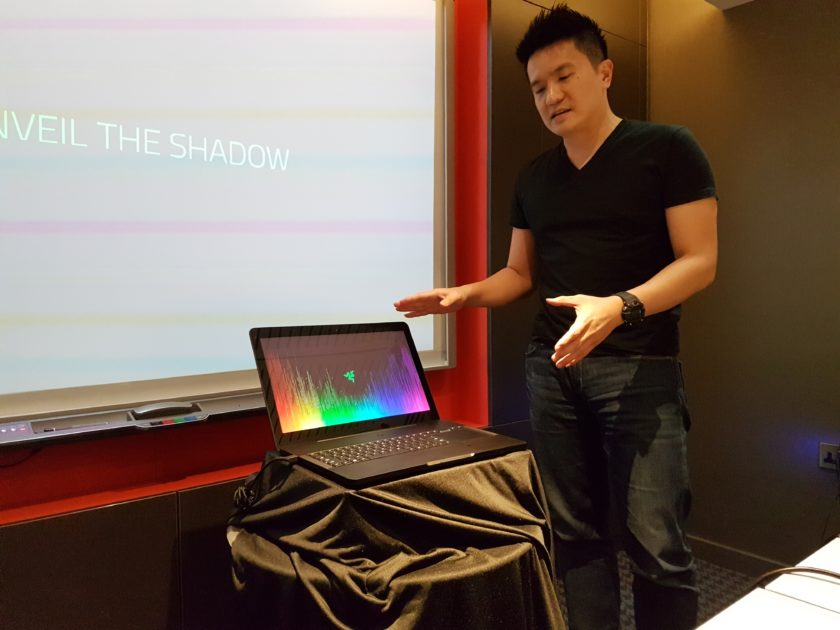 Min presents the new Razer Blade Pro to me...

An Intel Core i7 is of course standard so no surprises there, but the first big shock is that they’ve managed to squeeze an Nvidia 1080 into a chassis that is 22.5mm thin! Exactly how they plan to cool that thing effectively is anyone’s guess, but Min, clearly proud of Razer’s achievement explains to me that Razer’s engineers have designed what is the world’s thinnest manufactured vapour chamber cooling system in a laptop and that it’s sitting right inside the Pro.

Next up, the Razer Blade Pro has an (obviously Chroma) mechanical ultra-low profile keyboard.

Min explains to me that the big ask around desktop replacement for gamers has always been two things. Flagship level desktop class graphics and a desktop class peripheral experience, I have a quick play on the keys. They certainly have a proper mechanical feel to them. This is impressive.

Let’s take a look at the full spec sheet:

That’s a pretty impressive list right there. The new machine is expected to ship to customers in November in the US and Europe. That’s right, again a fully localised version with UK, French and German layouts at launch!

The keys feel as gorgeous as you’d expect. Not quite up to what I get on a mechanical desktop (I’m personally a loud clicky key fan) but they have a quality feel to them. The touchpad is huge of course and that screen. I take it in with a sigh. THAT, is a screen. It's also a G-Sync panel I'm told.

Right, enough daydreaming, I don’t have much time before the next journo is due in to meet Min and several laptops to get through. I fire up Steam and get into Rise of the Tomb Raider, let’s see what this bad boy can do.

The fans kick in as expected, I go into the benchmark and start it up. The now long familiar Mountain Peak set piece starts. This is ridiculous, native 4k in a laptop and it looks smooth...

The fans have kicked into overdrive which is to be expected, the system is pretty loud like this and I start feeling around the chassis for hot spots. Feels like the GPU is in the space above the keyboard, there is probably 4 finger widths worth of space there (see below) and this feels the hottest. It’s pretty hot, not the hottest I’ve had in a laptop, but also not far off. All that performance comes at a cost.

And performance it does indeed have, the overall score in DX11 on very high preset at UHD comes in at 42.98 FPS. For reference, when I reviewed the 1080 Gaming X a few months ago, that came out at 51.42 in similar circumstances. That’s close to a 20% improvement although of course the Gaming X is clocked higher than a reference 1080, additionally the space in a desktop will obviously allow you a significantly more effective cooling solution than a small enclosed chassis like the Blade Pro’s. Reference 1080’s typically get in the high 40’s under similar scenarios.

Looking at the machine itself, it has a scroll wheel at the top right of the keyboard for volume control. I also take a quick peek in the windows control panel to see what the scaling is set to given the UHD panel and small size. 250% is the figure chosen. It feels a little large to me, I’m used to running a 32” UHD at 100% at home so I’d probably lower this a bit.

Lifting the machine up, despite its svelte physical thickness (or thinness as everyone insists on calling it these days), it’s still a hefty machine. Unsurprising again, but light when you consider the power inside the Pro. Even so, I wouldn’t be particularly keen to be a road warrior having to cart that around day in day out. The charging brick is also smaller than comparable ones I’ve used on high spec desktop replacements, which is of course another decent engineering feat, although again, to call it light would be wouldn’t be entirely accurate.

Ultimately, it’s a great looking and feeling machine. Personally, the size of the machine is a compromise too far for me, but that’s neither here nor there. Plenty of people want desktop replacements and in that regard, if I were in the market for such a machine, this one would have to be at the top of the pile.

I’d be interested in getting more time to play with it though. The thermals/acoustics are noticeable and it would be interesting to get some GPU-Z stats from an extended gaming session to see how GP104 throttles in such a constrained environment, but for those looking for a desktop replacement which doesn’t break the back, this has to be the prime candidate.

Just don’t expect it not to break the bank. Razer makes good kit and good stuff doesn’t come cheap. The Razer Blade Pro starts at $3,699, €4,199 and £3,499. It also looks like pricing was set before Sterling hit its current level of about $1.21- $1.23 to the pound in recent weeks since if you take the UK price excluding VAT, it comes out at under $3,600. Whether Razer adjust pricing in the future to more accurately reflect current exchange rates is another matter but I’d be surprised if their CFO isn’t keeping a very close eye on US$ strength vs. the Euro and Sterling for the next few months.

Although the Razer Blade Pro isn't on sale today, you can go to here to register your interest for when it goes on sale, with the first units expected to ship in November.

The fit and finish of the machine is extraordinary though and the touch screen is responsive and beautiful. If you were trying to decide between a desktop and a laptop, Razer may have just made the decision for you…