Assassins Creed Unity is the next step in the famous game series that has quite the cult following. The game is powered by the Anvil Engine and Ubisoft recently did a tech demo for the upcoming iteration of AC which is Unity. The engine looks quite beautiful and boasts a plethora of interesting effects. CryEngine seems to be in trouble (if reports are to be believed) and the field is open for the next king of the hill when it comes to gaming engines. 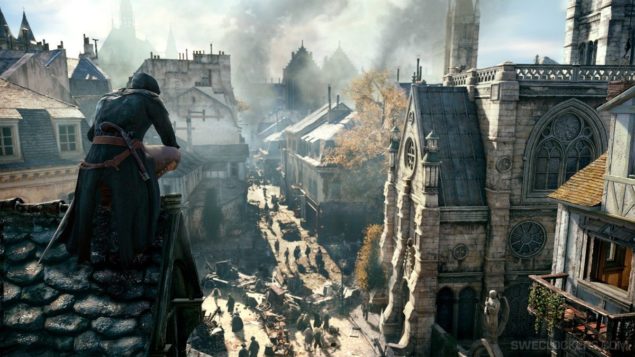 Although Unreal Engine is currently the  favorite for taking over the vacuum that could be left behind CryEngine (if hypothetically speaking, its troubles continue) multiple tech demos have been emerging on the scene. Assassins Creed Unity's Tech Demo shows of the Anvil Engine to great effect. The developers managed to recreate old Paris in an almost 1 to 1 scale. The demo showed off some very advanced lightning features, volumetric lightning and shadows. But perhaps the most promising thing (at least according to the demo) was the Advanced AI.

We see a very very large number of NPCs moving about on screen and that in itself is remarkable. But the AI tech used doesn't stop there, apparently the AIs will be nigh impossible to predict and will be more individualized than ever before. This is an admirable achievement and I can't wait to see it in action. Better AI means a better game play. Following the Alan Turing ideology, when we can no longer differentiate the actions of an AI from those of a chaotic human PC, for practical purposes we have ourselves a real AI. The game itself will be available on 28th of October this year for the PC Platform, Xbox and PlayStation.