Twitch has long reigned as the king of online video game streaming. Amazon (NASDAQ:AMZN) snapped up the streaming platform for just under a billion dollars back in 2014 and with the explosion of e-sports and video game streaming since then it has proven out as one of Bezos' shrewdest moves.

Fast forward to 2020 and the streaming landscape has a few additional competitors compared to 6 years ago. Google (NASDAQ:GOOGL) has made strong in-roads with its Youtube Gaming platform. Microsoft (NASDSAQ:MSFT) has been pouring money into its Mixer platform, enticing top personalities such as Ninja and Shroud. Facebook (NASDAQ:FB) also has its own service called Facebook Gaming, which may have been flying under the radar for some.

Thanks to StreamElements and Arsenal GG we are privy to insightful industry data that gives us the current state of things when it comes to Twitch and the greater streaming market. In fact, StreamElements releases a quarterly report called the "State of the Stream" that provides information such as market share and breaks down how specific categories and streamers are doing.

YouTube Gaming and Mixer, when compared to Facebook, fall a bit short. Youtube Gaming more or less held steady while Mixer did ever-so-slightly better by improving its share of the pie to 2.6%, up from 2%. You could say Mixer is up 30% relatively, but given a 0.6% absolute increase in viewership it shows that not much changed here either.

First, Mixer's results could be seen as a spectacular failure when you take into account the marketing and money Microsoft has plunged into the platform. N1nja and Shroud are both huge brands in and of themselves and each signed multi-million dollar contracts to move to being Mixer exclusives.

With star-studded talent, a 0.6% gain of the streaming market is simply abysmal. Is Microsoft going down the "Bing" road once again?

The real winner here is, of course, Facebook Gaming. An absolute 5.4% increase in market share, which by the looks of it came exclusively from Twitch's hands, is a big-time win. According to Arsenal GG's analytics: 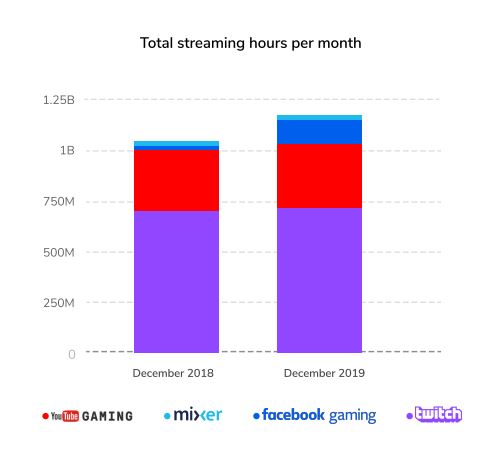 What we are seeing in the above chart is that the overall market is continuing to grow. Twitch actually had more hours viewed in 2019 versus 2018 despite losing 7% market share to the others. Total streamed hours went up across all platforms went from 1.066 billion hours to 1.194 bh.

Lastly, Twitch showed huge growth in a somewhat surprising category: "Just Chatting". This all-encompassing category, for the time being, is basically anything non-gaming. This category was so popular that for the first time in Twitch's history it was the most popular category, eclipsing heavyweights like League of Legends and Fortnite.

We are witnessing a rather major shift in the demographics and content type on what is (or was) traditionally a gaming-oriented service. This shows that people are drawn to services like Twitch not just for gaming but other things such as casual live streams discussing food or even streamers doing exercises in front of their faithful audience.

It shouldn't come as surprising that the battle for supremacy in what could be the internet's fastest-growing video consumption model is dominated by the internet giants. Amazon's Twitch, Google's Youtube Gaming, Microsoft's Mixer, and Facebook's Gaming platform.

All four have incredible resources at their disposal, and yet Facebook Gaming seems to be showing the most promise and amount of market disruption as we head into 2020.

The Growth Fund of America seem to be betting heavily on Facebook's ability to drive its business with emerging services like Facebook Gaming. Facebook is the fund's second-largest holding as of today with around 5% of its total $200 billion portfolio invested into Zuckerberg's outfit. That's just shy of $10 billion, or about 55 million shares of $FB.

If Facebook can continue to make such strong improvements in its streaming market share these fund managers are in for a nice payday bonus before too long.