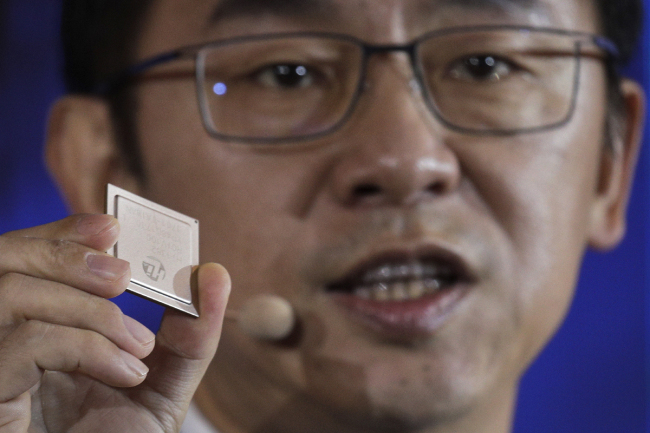 Huawei's Executive Director and President of the Carrier BG Ryan Ding showing off the Tiangang base station chip in 2019.

Now, after TSMC reported sequential and quarterly revenue growth during its third quarter and year-to-date 2020 earlier this week, a rumor in China suggests that the fab has secured some relief from American authorities in its ability to deal with Huawei. The report states that TSMC will be able to provide products that are fabricated on mature manufacturing nodes to TSMC, but it does not mention which nodes the company will be able to use.

The sanctions against Huawei came in the backdrop of the company's souring ties with the American government at the start of the global 5G rollout. Huawei secured for itself a dominant position in this rollout, as it focused extensively on researching, developing and selling telecommunications service providers the equipment that they need to provide consumers with the next-generation cellular network.

Additionally, unlike some of its competitors - Nokia and Ericsson - Huawei also sold consumer 5G modems in its smartphones that allowed users in the initial phases of the 5G rollout in China to use the service.

Today's report, citing sources of Jiwei.com, states that the U.S. Department of Commerce has granted TSMC licenses for some products that the fab can sell to Huawei. However, the nature of these alleged licenses also suggests that they might not be able to let the Chinese company compete effectively in the 5G base station market either. Additionally, Huawei will be unable to secure smartphone processors through the licenses, believe the sources, as they believe that the telecommunications company will still find it unable to recover in both the base station and smartphone markets.

President of Huawei’s Carrier Business Group Ryan Ding announcing the company'sTiangang chip for 5G base stations in 2019. Several reports suggest that the chip is manufactured by using the 7nm process node, but Huawei's press release for the product does not mention the node.

Huawei's launch of the Tiangian processor in 2019 was heralded by many as a first of its kinds. In this pre-sanctions era, the company led in the global 5G rollout, particularly as European companies embraced its products with open arms. At the time, its own figures suggested that Huawei had shipped 25,000 base stations globally, and it promised that the Tiangang would serve small and large scale 5G deployment. It would achieve this by being able to integrate a large number of power amplifiers and antenna arrays into small antennas and promised smaller and lighter AAUs (active antenna units).

Rumors denied by the U.S. Department of Commerce have also suggested that TSMC's investment in a $12 billion chip fabrication plant in Arizona was conditioned on the chipmaker being allowed to continue its business relationship with Huawei. Yet, the future of this relationship still depends on Commerce deciding which products designed and manufactured using American-sourced technology are not a threat to U.S. national security interests.

TSMC announced key financial metrics for its third quarter of 2020 yesterday. In the quarter that ended in September, the chipmaker earned NT$127 billion in revenue and NT$978 billion in the first three quarters of this year. Both of these figures mark for 25% and 30% year-over-year growths respectively as they come at a time when Huawei was reported to have been stockpiling 7nm and other products before the U.S. sanctions came into effect in September.

Yet, as mainland China lacks in chip fabrications, these are unlikely to solve Huawei's long-term problem of securing advanced chips. China's Semiconductor Manufacturing International Corporation (SMIC) has also come under American scrutiny due to it being Huawei's second-best chance at solving its chip problems.

Update 10:29 ET, October 9, 2020: In response to questions about the rumors, the company's translated response refuses to reply and categorizes them as "baseless".