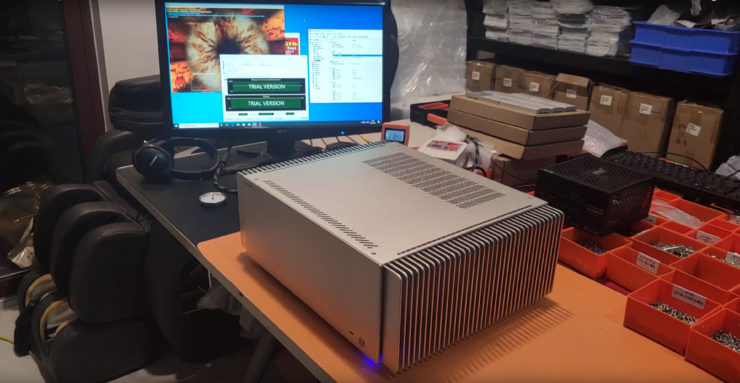 We have seen many demonstrations of a truly fanless PC case but nothing as extreme as the one that Truemetal has cooked up. The PC case manufacturer has designed an entirely passive cooled setup which rocks a 32 core AMD EPYC CPU and a desktop-class, GeForce RTX 2070 graphics card.

Spotted by Anandtech, the PC designed by Truemetal is built around the UP10 chassis which is a completely fanless design, featuring passive cooling. The case itself costs $888 for the silver color and $899 for the black colored variant. The key features of this case are that it can support both, an SFX/ATX PSU and a discrete graphics card along with up to an EATX motherboard. The whole case acts as a thermal heatsink with a large Heatpipe block that has multiple contact base for the CPU and GPU. The heatsinks transfer heat to the aluminum chassis, dissipating heat into the case itself.

When it comes to the setup, Truemetal demonstrated the full potential of their UP10 chassis by equipping it with an AMD EPYC 7551 32 core, 64 thread chip which is rated at 180W along with a Gigabyte GeForce RTX 2070 graphics card which has a rated TDP of around 175W. The board used was an EPYC grade Supremicro ATX design.

The heatsink assembly is designed specifically for the consumer-grade products and not for server processors like the AMD EPYC chip tested here so a custom design had to be made which included a copper heat spreader which alone weighed in at a total 2.5 kg. Even the RTX 2070 was equipped with a custom heatsink block which covers the entire PCB rather than the GPU alone.

The setup all together was a 360W beast which had to be passively cooled but surprisingly, the PC ran stable under the entire duration of 22 hours of which 12 hours consisted of full load PC torture tests. The highest temperatures recorded were 77C for the 32 core AMD EPYC CPU and 88C for the RTX 2070 GPU which is well under their maximum operating range and hence, there was no visible thermal throttling on any of the components. The ambient temperatures were 14C.

The UP10 definitely shows that viable fan-less designs are here which can accommodate 24/7 operation with no throttling issues, especially when it can support a 32 core AMD chip. These PC fanless cases from Truemetal were available on Taobao but FanlessTech reports that they would soon be heading out to European markets too.