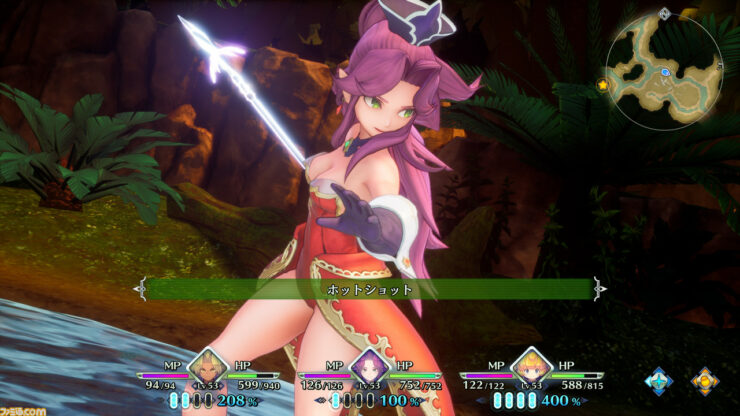 New Trials of Mana screenshots have been released online, alongside some new details on the remake of the popular action role-playing game.

The new screenshots, which have been shared by Famitsu, showcase both returning and brand new mechanics, such as costume change. Like the original, Trials of Mana will feature a unique class system that will allow each character to choose between two different classes for the two possible class changes. Costumes will be different for all classes, and players will be able to choose which costume they want to use, regardless of the current class. The remake will also feature a system that will allow players to reset their class changes through a rare item called Goddess Scales and growth points, which are granted upon level up.

Additionally, the game will feature a new ability system that will allow players to equip over 300 abilities as well as Link Abilities, which can be equipped by the whole party. Some of these abilities are learned by talking to specific characters on the field.

Dave had the chance to try out Trials of Mana last year, highlighting how the game has been updated considerably over the original SNES release.

As you would expect from the Mana series, combat is simple at first, tough to master. I played a fairly early section of the game, and my attacks and abilities were limited, so it's hard to say how combat will evolve over the course of a playthrough, but hopes are high. At the point I was at in the game, I could lock on, dodge, attack… Pretty simple stuff, but this is a JRPG, and therefore the real meat of the combat is locked away behind new weapons, party members, and abilities.

Trials of Mana looked good, sure, and played as well as you would expect, but those points felt minor compared to the real takeaway: this is a full remake. While Secret of Mana felt somewhat lacking, Trials of Mana's remake delivers on every mark, a complete modernization of the old Mana games, akin to Final Fantasy VII's remake. It's certainly not going for realism like FF7R, but everything here is being brought up to scratch, not simply replicating the original game but in 3D.