SEGA has announced today the Total War: Warhammer release date. It's coming out on April 28, 2016, obviously on PC only. 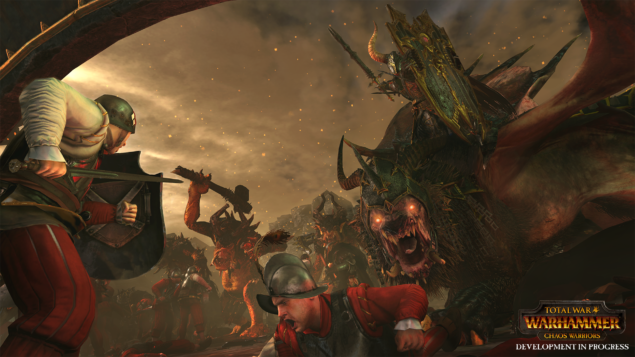 The press release mentioned that Total War: Warhammer is going to be the first in a trilogy; it will feature both free and paid content added post-launch.

Those gamers who pre-order any edition from participating retailers will receive Total War: WARMAMMER’s first DLC for free alongside the game on release day. The Chaos Warriors Race Pack includes three new playable Legendary Lords, enabling you to select the corrupted and powerful Chaos Warriors as your race in the Grand Campaign.

Featuring unique new mounts, bloodthirsty units and monstrous creatures, this Race Pack also brings with it a brand new, narrative-driven quest chain for each Legendary Lord, and an armoury of twisted and cursed magic items.

The Total War: WARHAMMER High King Edition will be produced in a single, extremely limited run.
Modelled on the legendary Book of Grudges, the High King Edition will ship in a large ornate presentation box, featuring metallic gold and 3D sculpted detail in the iconic Dwarfen style. Contained within is a host of treasures guaranteed to sate the gold-lust of the mightiest Dwarfen High King; including:
-  Grudge Ring: This quality metal ring, with a rotating inner band is perfect to spin whilst brooding over grudges and plotting revenge. Six numbered bevels on the inner hoop allow the ring to double as a fully functioning die.

-  Slayer’s Whetstone Pendant: Made of genuine, functional whetstone and inscribed with the talismanic Master Rune of Spite, this hefty trinket would be treasured and jealously guarded by any self-respecting Slayer, who aims to keep a keen edge on their blades.

-  Dwarfen Drinking Horn & Stand: Toast your victories with this beautifully decorated drinking horn; wrought with icons and sigils in the Dwarfen craftsman style. Suitable for both display and practical use, it can hold a full pint and comes complete with its own unique metal display stand. Please note, liquid cannot be ‘sipped’ from this drinking horn, it may only be ‘quaffed’.

-  Canvas Map: Plan your campaigns of conquest as any High King should with this gorgeously illustrated canvas map of the game world.

-  Metal Case: Protect your game disks from the perilous dangers of the Old World with this exclusive metal case.

-  Insider Guide: A printed strategy guide for Total War: WARHAMMER; this book will help get you started with the game and offers invaluable tactical advice to help you dominate the battlefields of the Old World.

The High King Edition will be available for purchase from select retailers. As for the Limited Edition, this version will include the metal case and Insider Guide already detailed for the High King Edition; you can pre-order it here.

The Total War: Warhammer release comes a year and two months after the launch of Total War: Attila. Stay tuned, as we'll have the opportunity to go hands-on with the game and to talk with a developer at Paris Games Week.