Google’s Play Store offers over 2 million apps to Android users. But only a select few of these apps have dominated the top charts for years. A latest report has analyzed data from over 3 million randomly selected Android users. The report confirms some expected popular names while also giving us a few shockers.

AVG’s 2016 App Report reveals that Google’s Play Store, Google Plus (really?), Quick Search Box, YouTube, and Facebook were the most commonly used apps during the first half of 2016. Top 4 of these 5 apps belong to Google itself. Which isn’t actually surprising since all of them come pre-installed with Android devices. If you go further down the list of the top 50 most commonly used apps, you will notice even more apps from Google and its OEM partners. Topping the list are also some popular messaging and video sharing apps that have taken the industry by a storm lately.

"Being baked into most Android devices, the dominance of Google’s own apps and services isn’t surprising. What did surprise us, however, given Google’s dominance, is that Gmail experienced quite a drop in overall popularity among our sampled user base, going down from Rank 4 (used by 77% of the users sampled) to 14 (roughly 50%)," the report noted.

Why is Gmail suffering this drop? Are messaging apps finally taking over the email communications, as has long been suspected? Well, we will keep that question open for some other post.

Snapchat nowhere in the top

Coming back to the top 50, one app missing from this list is Snapchat. Generally considered as a widely used app, Snapchat is at number 76 of the most commonly used Android apps. While it may not be the most widely used app, it certainly took the title of being one of the most resource-hungry apps.

Another surprise? TripAdvisor. A fresh face, this app’s inclusion in the top 50 could be thanks to how the travel website pushes users to download and switch to the app when you browse on your mobile devices.

This year's Trend Report also revealed the top most used Android devices. While Samsung still dominates the list, there are a couple of surprises by Sony. Following Samsung’s rather older devices are Sony Xperia Z3, Z3 Compact and Z2. All of the top 10 most used devices are still running 3-year old KitKat which shows just how fast Android’s adoption rate really is. Following is the complete list of the top 10 most used Android devices. 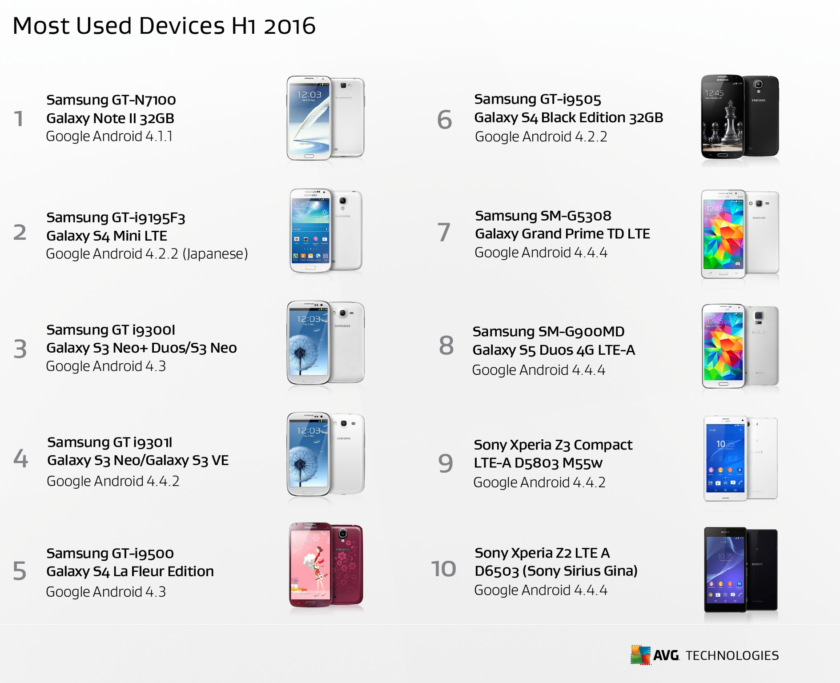