Use TinyUmbrella To Save SHSH Blobs For iOS 8.3 – How To

Today marks the day of Apple's iOS 8.4 release along with Apple Music but what if you change your mind to downgrade to the current version, iOS 8.3. The technique involves saving iOS 8.3 SHSH blobs so you can use them later on to downgrade to iOS 8.3, even when Apple stops signing firmware for the respective version. To avoid jailbreaks, Apple always restores your device to the current version.

This is usually adopted by users who wish to downgrade their firmware for jailbreak. Hence,  when Apple stops signing the iOS versions, you can use these blobs to downgrade your iOS and create a pre-signed IPSW file using the RedSn0w tool. Not so long ago, Apple patched all vulnerabilities that allowed users to downgrade to the previous or older version of iOS. Devices Devices include iPhone 4S or later  or iOS 7 and higher. Thus, there is no way you can use SHSH blobs to restore to iOS 6.x or higher apart from iPhone 4, iPhone 3GS, iPod Touch 4G and iPad 2.

Save SHSH Blobs For iOS 8.3 Using The TinyUmbrella Tool

There are always exploits in the system, so with all thanks to iH8sn0w, SHSH blobs are relevant again to use for later versions as well. So if Jailbreak is not possible on iOS 8.4 version, users can always downgrade to iOS 8.3 using SHSH blobs when Apple has denied signing the previous version. So lets get on to it.

The first thing that you need to do is Download Beta for TinyUmbrella which will aid in extracting the SHSH blobs from Apple for your current iOS version. It is available for both platforms, Mac and Windows.

Also Download Java and install it on your system. 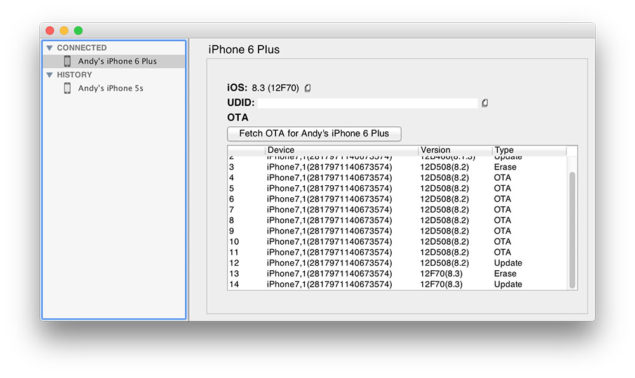 Open TinyUmbrella on your system and connect your device to the computer. If there are not any permission issues then TinyUmbrella should automatically download all the SHSH blobs for your iOS 8.3. And that's it. SHSH blobs for iOS 8.3 have been downloaded and can be used later for downgrading even after Apple has stopped signing the firmware files. For a more specific tutorial, check out the video.

This is it for now, folks. Let us know your thoughts in the process. Will you be downgrading to iOS 8.3 in the future?