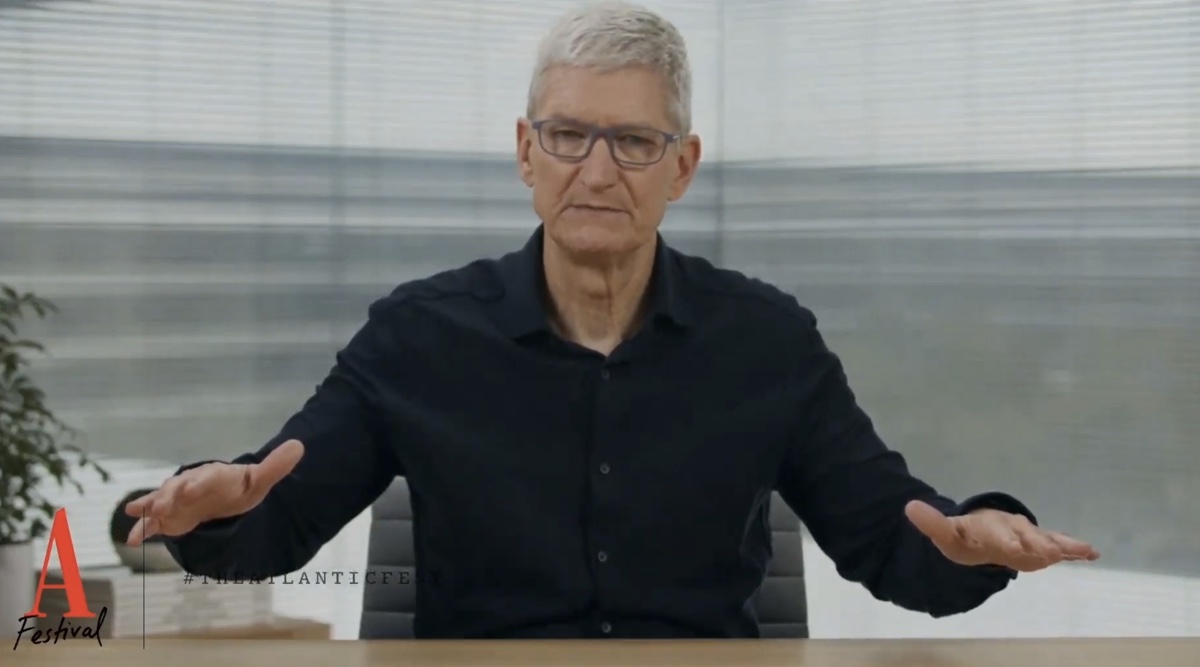 Tim Cook, Apple’s CEO, appeared in an interview at The Atlantic Festival where he answered some interesting questions regarding the ongoing antitrust investigation into Apple’s market dominance, his relationship with Trump, and his take on working remotely during the current pandemic.

The Atlantic Festival, previously known as Washington Ideas Forum, has been active for over a decade. Organized by The Atlantic, a newspaper with majority ownership by Lauren Powell Jobs, the festival features various interviews, performances, film screenings and so on. Tim Cook was part of day 1 of the virtual festival, and was interviewed by Jeff Goldberg, Editor in Chief of The Atlantic.

The interview started with the California fires and how it has affected various Apple employees who had to be evacuated because of air quality issues. Cook also went into detail of Apple’s commitment to becoming end-to-end carbon neutral and how its efforts impact climate change.

The climate conversation soon shifted to the United States President’s opinion on climate change and Tim Cook’s relationship with him. Cook answered that his conversations with the president are private so he couldn’t share them. He shared how he believed in engagement and policies and not the politics. Being engaged with the administration helps the company have a says on topics like climate, DACA, workforce training and more.

Regarding America’s response to COVID-19, Tim Cook responded with details on Apple’s focus and contributions during the pandemic. The company used its best in class supply chain to source masks and donate over 30 million of them around the world. Apple also created and donated over 10 million face shields and also helped source millions of test kits. Cook’s opinion was that Apple did everything it could instead of waiting to be asked.

When asked about employees working remotely, rather than from Apple’s beautiful campus, Tim Cook shared that the company has been working remotely for 6 months. The teams had done an impressive job with delivering innovative new products despite working remotely, however, it was not the same as working together in the office. Cook also said that he does not believe that things will go back to how they were pre-pandemic as somethings work better virtually, but then the spontaneous interactions and creativity that results due to physical interactions cannot be replicated remotely. Just 15% of Apple employees have been working from the office in recent times.

On antitrust investigations into Apple’s policies, Cook said that it is fair for big companies to be questioned and that they deserve scrutiny and probing. Tim said in clear words that Apple is not a monopoly and that the company competes in markets which are fiercely competitive such as phones, tablets, personal computers and smartwatches. He called it as street fights for market share. The company’s strategy is to make the best, not the most, of any product, which makes it almost impossible for them to become a monopoly. He expressed hope that people hear Apple’s story and how it conducts itself with professionalism and integrity.

Cook was also asked about privacy issues, to which he responded that privacy is a fundamental human right and that Apple does not create profiles of its users.

The interview also went into details on Apple’s relationship with countries that might not have a good track record with human rights. Cook said that the company focuses on the user and that he strongly believes that business is something that brings people from various countries together.

Cook was also asked about potential retirement to which he responded that he considered it a privilege of a lifetime to be Apple’s CEO. He said that he loves the people he works with like they are his family, however, he gave no clear answer as to whether he has any plans for life after Apple.

Check out the complete interview below: