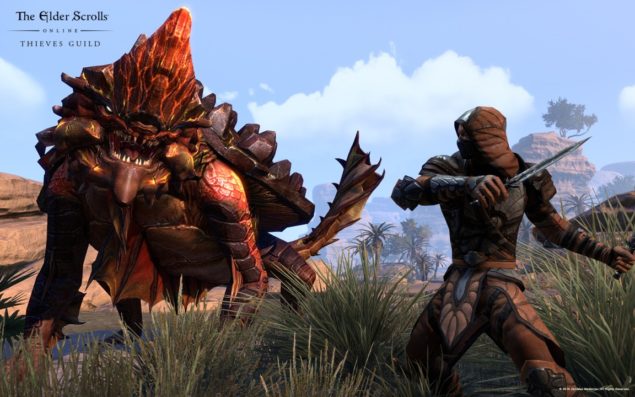 Console owners will have to wait a few weeks. The new pack comes to Xbox One on March 22 and PlayStation 4 on March 23.

For those still playing the MMORPG, Theives Guild will be available for free with an active ESO Plus account or for 2,000 crowns on the store.

Leveraging ESO’s Outlaw Refuges, Thieves Guild quests take you all over Tamriel to engage in – and profit from – criminal activity such as stealing, looting, and pickpocketing. Heists, a new quest type, allow you to hone your thieving skills by adding trespassing and stealth/hiding mechanics that enable you to break into warehouses and homes in Abah’s Landing to relieve merchants and citizenry of their goods. Beware of the guards!

New 12-Player Trial
With both Normal and Veteran difficulty modes, the Maw of Lorkhaj 12-Player Trial will test your allies and your courage. Breach the gates of an ancient Khajiiti shrine, and confront the ghostly legions of Namiira in eerie lamp-lit corridors - complete with ruthless new enemies, terrifying bosses, and a wealth of treasure from the depths of Oblivion.

All-New Skill Line
Want to enhance your character with all-new thieving, sneaking, and stealing-related passive skills? You’re in luck! The Thieves Guild in Abah’s Landing will teach you these skills as your progress through the ranks of the organization.