This thinnest-smartphone war doesn't seem to end any sooner, does it? Every other week we get to see rolling out of a device claiming to be the thinnest smartphone ever. So now, it was turn of the Chinese manufacturer ZTE, which just showcased its Grand S smartie, sporting 5-inch 1080p screen and still managing to fit in a 6.9mm thin case. 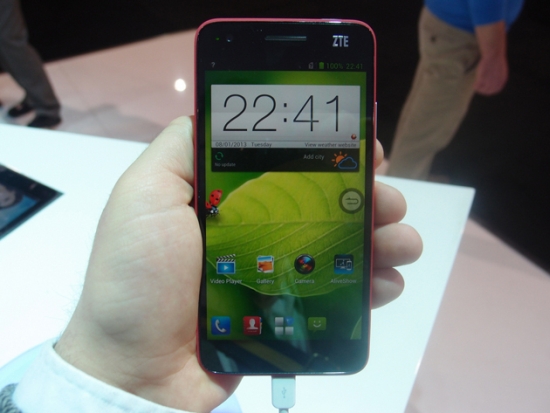 It is styled on the glossy versions of HTC One X, two-toned and with capacitive buttons. Nexus styling is also followed by adding pogo pins for charging and docking at the right side of the device. The rather mandatory custom UI, proprietary Palm Manager Software for better electricity use and protecting private information are also in place to keep “the perfect combination of art and technology”.

Android Jelly Bean 4.1 and a 16 GB memory are some other highlights apart from the screen size and styling. The specs list does not end here though: Grand S is showing off a cool 1.7 GHz quad-core Snapdragon S4 processor, 2 GB Ram, 2M 1080P video and a 13-whopping-MP rear camera with flash! ZTE hasn't made any mention of a MicroSD card, battery details and price yet.

The Grand S will be available in China during first quarter of this year but no such information about worldwide availability has been publicized yet. The ZTE Grand S will be on display at ZTE booth during the muchly hyped CES event.

“It is fitting that we can announce the world debut of the ZTE Grand S at CES 2013, the world’s largest annual innovation event.”

“The ZTE Grand S gives our customers the latest in technology, functionality and style. We understand that today’s consumers call for advanced features and state-of-the-art multimedia options in their handsets, and the ZTE Grand S confidently addresses those demands,” said Mr. Kan Yulun, Corporate Vice President of ZTE Corporation and CTO of the ZTE Mobile Device Division. “It is fitting that we can announce the world debut of the ZTE Grand S at CES 2013, the world’s largest annual innovation event.”

Key features of the ZTE Grand S include:

The ZTE Grand S will be available for online purchase in China first in Q1 of 2013.”