How do Tesla's (TSLA) Q1 2022 Earnings Expectations Stack Up?

For the three months ended on the 31st of March 2022, analysts expect Tesla to disclose $17.85 billion in revenue.

Tesla delivered a record-breaking 310,048 units in Q1 2022 on the back of the production of 305,407 units. Bear in mind that the company expects to continue registering an increase of at least 50 percent in its annual deliveries for the foreseeable future.

Of course, in light of the ongoing global oil shock as a result of the Russia-Ukraine war, analysts expect demand for EVs to remain robust. However, supply chain constraints emanating from China's COVID-19 lockdowns, which shuttered Tesla's Shanghai plant recently, continue to act as major headwinds for the company. Nonetheless, the EV manufacturer is trying to limit the impact of these exogenous supply shocks by entering into long-term deals with major suppliers. For instance, as per the reporting by Bloomberg, Tesla recently signed a multi-year nickel supply deal with mining giant Vale SA. Moreover, Musk has indicated his willingness lately to enter the lithium mining business.

Earlier this month, Tesla's Gigafactory in Austin, Texas, became operational. The facility is expected to produce Cybertrucks as well as around 500,000 units of Model Y starting in 2023. In fact, by the end of 2022, Wedbush analyst Dan Ives expects Tesla's production capacity to increase to around 2 million units from 1 million units currently.

Coming back, Tesla is expected to report a non-GAAP EPS of $2.27. 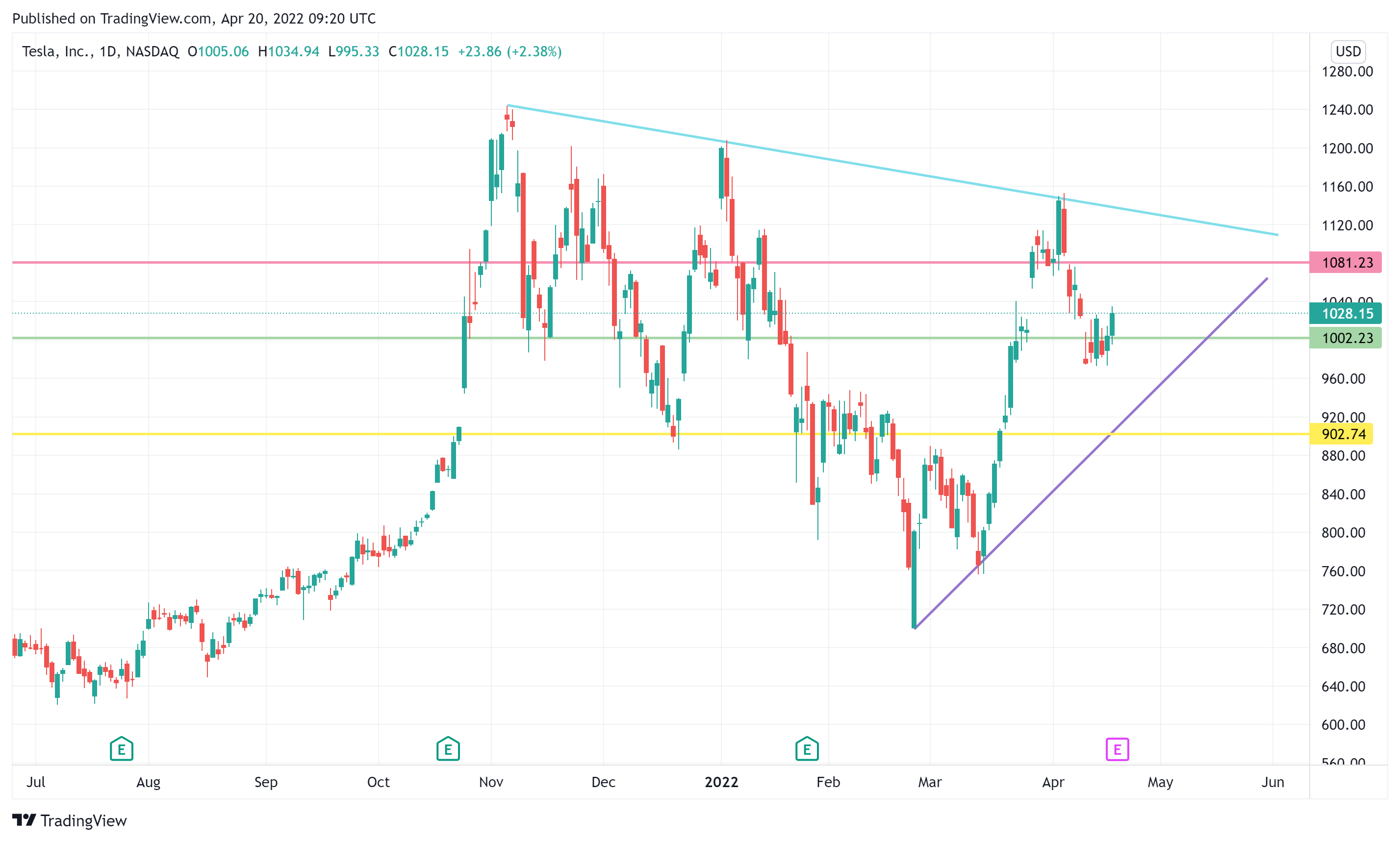 The chart above illustrates key trendlines as well as support and resistance levels for Tesla shares. As is evident, the stock is currently in a short-term uptrend lodged within a medium-term consolidation pattern, bounded by the two trendlines forming a wedge pattern of sorts.

If Tesla disappoints today, the stock can easily revisit the $900 price zone. On the other hand, a surprise to the upside can feasibly see the stock trading at the $1,081 price level relatively quickly.

As far as the options market is concerned, Tesla currently has a 30-day put-call ratio of 1.0490. Given the stock's volatility and the attendant need for hedging via put options, this metric is currently quite typical.

The snippet above details the trading activity in Tesla puts and calls yesterday, segmented by expiration. Notice that there is no abnormally large imbalance between puts and calls in the near-term, as evidenced by the open interest distribution for upcoming expirations. Yesterday, most activity took place in options expiring on Friday. In this expiration window, call open interest is currently concentrated in the $1,050 to $1,200 strike prices. For puts, the open interest for the upcoming expiration is concentrated in $900 to $1,000 strike prices.

Moreover, the 30-day implied volatility spread between 25-delta puts and calls for Tesla is currently in a slightly bullish phase, having normalized from the extreme bullishness seen toward the end of March. The current reading indicates that the market's bias for pricing in volatility risk to the option premium of downside puts and upside calls continues to favor the bulls.

Finally, we can determine the implied move that the market is pricing in vis-à-vis Tesla's earnings announcement later today. This is done via an at-the-money (ATM) straddle. I'll base this calculation on the upcoming weekly expiration this Friday. Based on yesterday's close of $1,028.15, ATM call price of $29.75 per share, and an ATM put price of $31.70 per share, the market is expecting Tesla shares to move $61.45 in either direction, equating to an implied volatility of around 6 percent.

When basing this calculation on the monthly contracts that expire on the 20th of May 2022, Tesla shares are expected to move 12.69 percent between now and the pertinent expiration. For comparison, this metric was at 17.28 percent the last time Tesla disclosed its earnings.