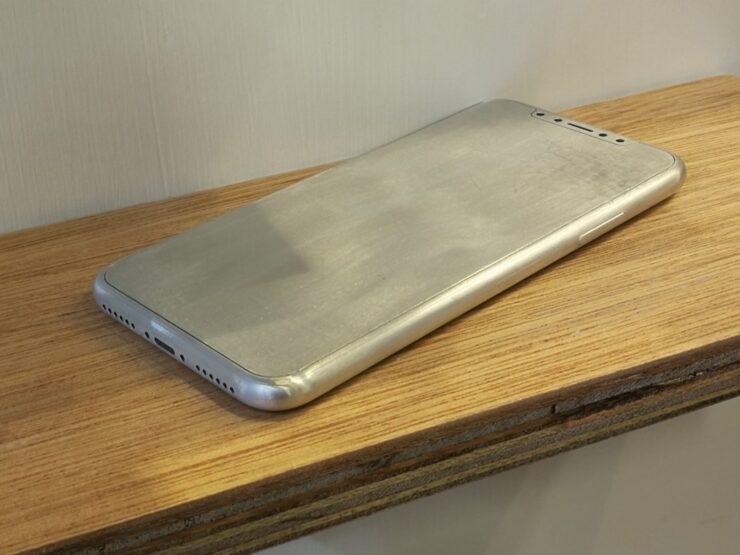 This year, leaks have started to take a rather interesting turn when we talk about the iPhone. First, we saw specifications and features surface for the device a good nine months before its launch. Now, we've started to see dummies of the smartphone surface, which are based on the smartphone's leaked renders and schematics. Today, another such dummy has surfaced at Computex. Take a look below to find out more.

Cases With Dummy For The iPhone 8 Get Displayed At Computex; Once Again Provide Similar Details

Before you get your hopes high, we've got a bit of bad news related to today's images. They come courtesy of a Taiwanese case manufacturer, who displayed his offerings at the Computex trade show. They cover every detail leaked related to the iPhone 8 recently. For starters, the vertical dual camera sensor is again present in today's images. Apple's rumored to make significant 3D and VR upgrades to the iPhone 8 and the camera change will make a huge contribution in this regard.

Moving to the bad news. According to the case manufacturer, the drawings on which his prototypes are based on aren't official. In fact, his information is as good as ours at the moment - which means that he's most likely based these on leaks by Venya Geskin. You'll see a similar assortment of sensors at the front of the alleged iPhone 8 dummy and no fingerprint sensor either at the back or the front.

A lot of interesting rumors are floating around related to the iPhone 8. While a vertical dual camera and virtual fingerprint recognition are the most hyped about details, we've got other information as well. The iPhone 8 will be the first smartphone from Apple which will feature an OLED display. This will follow Samsung's edged approach with the Galaxy S8 with an abnormal display to body ratio. This display might also hide the iPhone's front camera sensors underneath, if we're to believe some latest alleged design blueprints.

Finally, rumors of a new build material for the smartphone are also floating around. Apple is rumored to finally introduce wireless charging on the iPhone and new materials will make the feature possible. Overall, the iPhone 8 looks to be a very well rounded smartphone, with a rumored price tag north of $1000. Thoughts? Let us know what you think in the comments section below and stay tuned. We'll keep you updated on the latest.