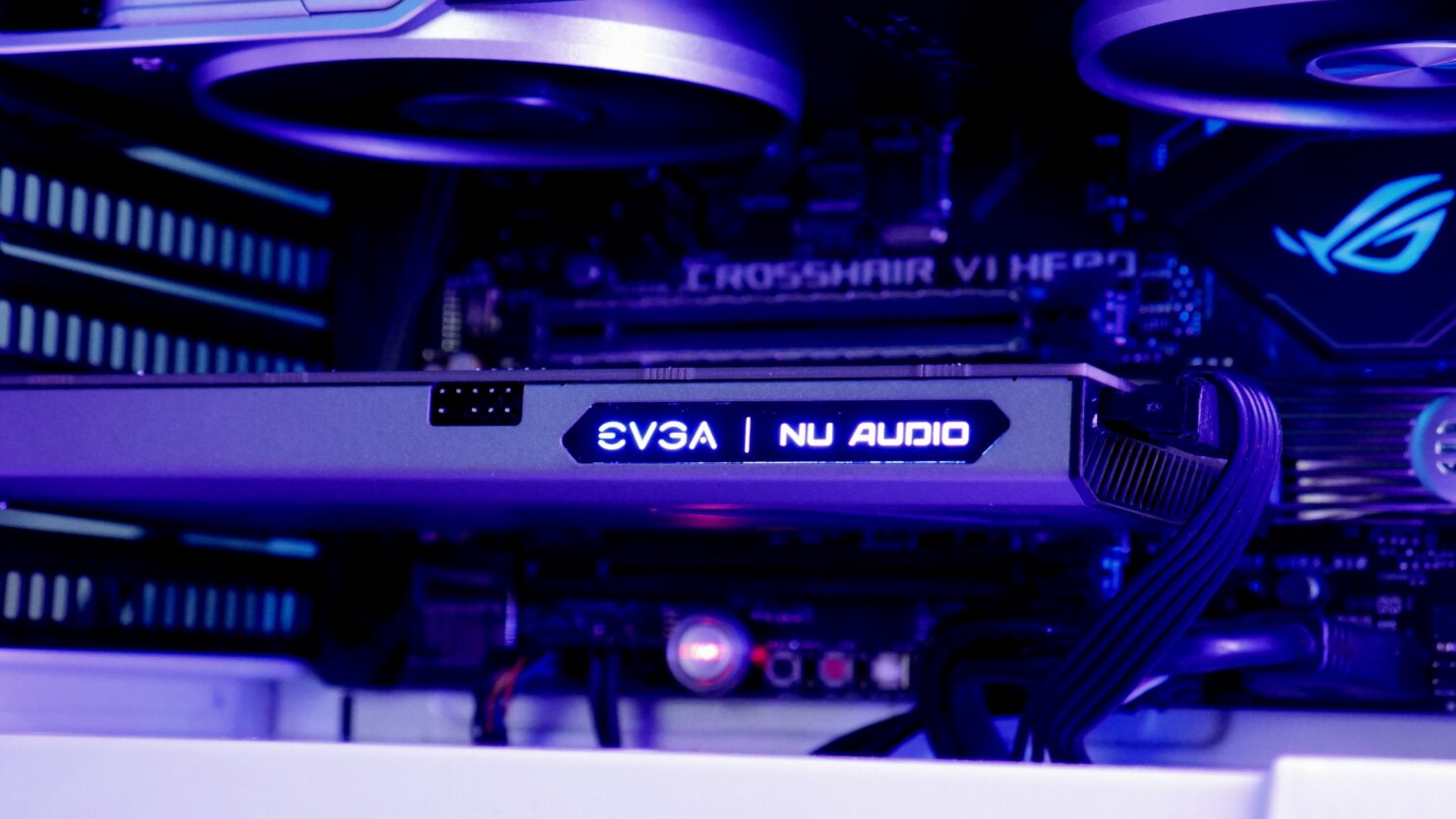 I want to start this and make it clear that I don't have the necessary hardware for a proper review so this will be more of a hands and ears on experience with the EVGA Nu Audio card.  Back at CES 2019 EVGA unveiled what ended up becoming the most unexpected product they could have launched, a sound card.  But, it's not just a sound card that throws out audio signals.  EVGA teamed up with Audio Note from the UK to deliver an exceptional audio device to produce what they're calling Lifelike Audio.  Often times audio is put on the back burner for a lot of people, especially since Windows Vista has come along, because of the major improvements of on board audio solutions and Windows being able to better handle audio than it once did.  At $250 for the general public the EVGA Nu Audio is entering a market where it has to prove itself.

The EVGA Nu Audio card comes in a very elegant package that keeps it clean and professional looking, but with that RGB flare of course. The shielding cover is metal so no plastic on the design and a mostly hidden heatsink which seems like a bit of an odd design choice but hasn't caused any issues in my use.  The EVGA Nu Audio connects to the PC via a PCIe Gen2x1 slot so you don't have to worry about occupying and splitting any precious PCIe Gen3 lanes on mainstream platforms and is passed through an Asmedia USB 3.0 controller on board. There is a copper shield around the Texas Instruments Ultralow-Noise power regulation design that is located beneath that heatsink.  Can we take a moment and appreciate the fact that they went with SATA power and not the bulky old MOLEX connectors? Audio Note comes to the table with their Audio Note specialized capacitor and resistors.  There are two premium OP-AMPS on board that can be swapped for those more willing to custom tailer the board to their needs. The DAC  and ADC are handled by Asahi Kasei Microdevices.  Those bright red blocks are none other than WIMA Capacitors which are world renown in the DIY audio scene.

Since you don't get physical buttons all your adjustments take place in the Nu Audio software.  The software interface is straightforward, easy to navigate, and welcoming to newcomers as well as seasoned audiophiles. On the Main page you have your separate audio levels for your Master Volume and Headphone level, something to take note of is that the headphone level is a percentage of what they main level is.  So to make that a little more clear, if you have headphones and speakers plugged in you'll need to turn off the speakers to get just the headphones as turning the Master down to 0 will also cut out the headphones since 100% of 0 is still 0. You also get control of the input Microphone and Line-in ports as well as being able to adjust the sample rate in multiple frequencies under 16bit, 24bit, and 32bit.  Hit the arrow and you're greeted by a 10 band equalizer that stretches from 32Hz up to 16KHz to really tailor the sound to your liking and six slots to save those settings to.  The other tab you'll notice takes you to the obvious LED control tab where you can customize the logo on the card to your hearts content, or just turn it off all together. 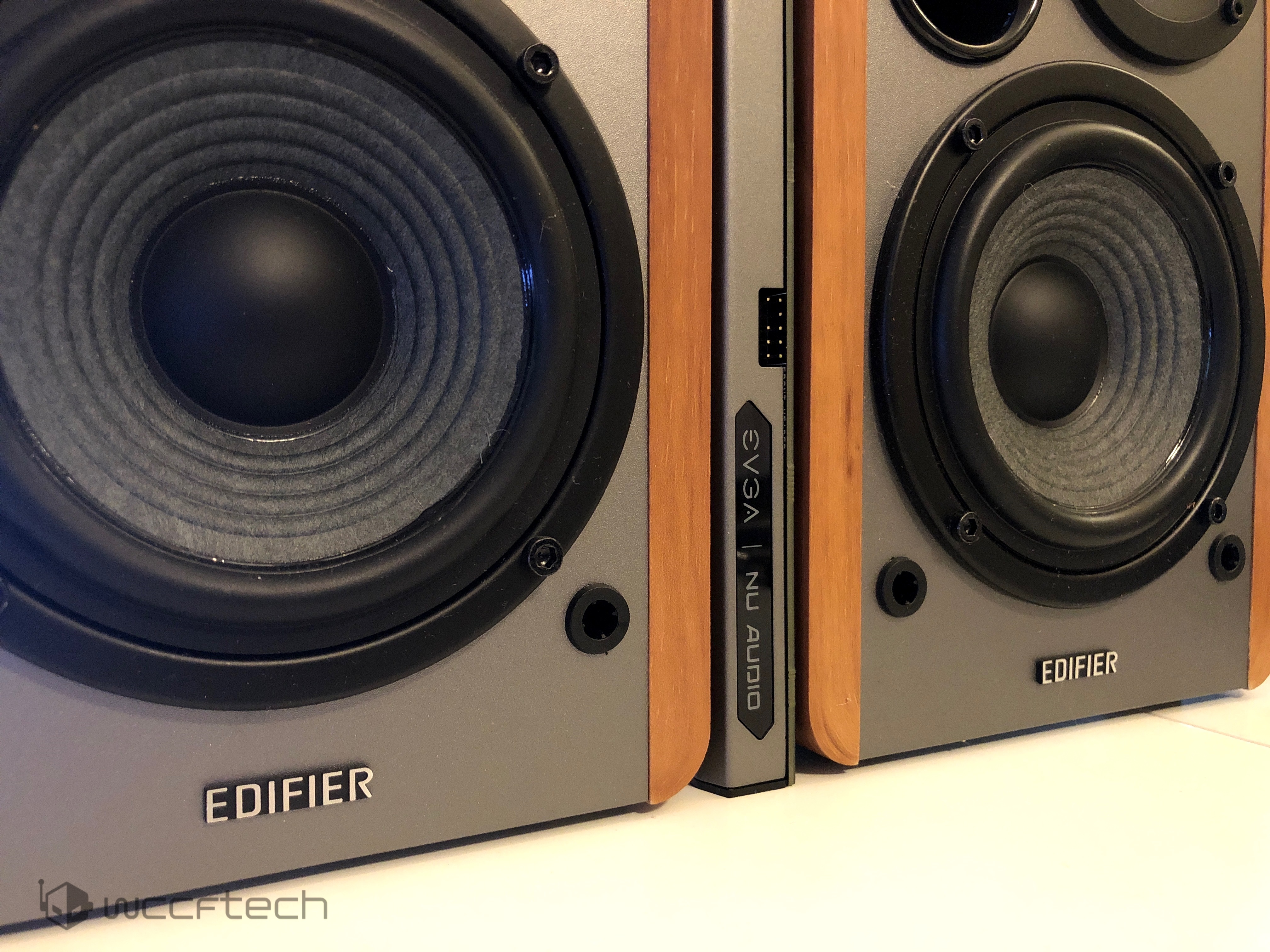 Taking in the Nu Audio was a bit of a challenge for me, not because I can't hear the difference in audio quality because I can after spending days on end inside a professional recording studio in my college days, but because it's hard to translate what you hear into words that make sense to people reading.  I had to retire my Bose Companion 5 series speakers since they had their own built DAC and ended up ordering a pair of Edifier R1280T powered bookshelf speakers that take input from either a 3.5mm jack or a pair of RCA jacks.  This was a crucial feature for me so I could compare the output from the Nu Audio and the Crosshair VI Hero's Supreme FX Audio solution.

Don't worry, I'm not about to fill the rest of this with words like chocolaty or warm but I can say there is a distinct sound signature difference between the audio sources when the sound levels are matched.  The channel separation when using the Nu Audio with the RCA connections is so good that you can easily get away with binaural audio sources and it be just like you're wearing headphones.  The highs and lows are just that, they don't mix and drown each other out so that sound stays as crisp as possible. The best way for me to describe it is when you're on a cell phone call and suddenly it gets so clear that you are convinced the call got dropped and you have to ask if they're still there, it's like that.

I know there's going to be question regarding headphones and to that I can't answer much as the only headphones that I use for work purposes are the Sennheiser HD 201 and they're not hard to drive at all.  While ease of drive makes these very usable the Nu Audio does make them sound very clear.  But I'm going to embed below a friend of mine's review where he puts the EVGA Nu Audio to task with very demanding headphones.

One thing I want to leave you with is that I feel that EVGA has an uphill battle with perception of the Nu Audio card is just another sound card when it isn't.  The Nu Audio is essentially an exteral DAC/AMP packaged nicely as an add in card and hands off the physical adjustment buttons and knobs to the software side and helps keep the top of your desk a bit more in check when it comes to being a tidy work space.  But, that's a tough sell in a world where the DAC/AMP business is very very competitive.