Disgruntled Dogecoin (DOGE) investors have now come up with a seemingly easy fix to the tanking value of their investment portfolios by launching a high-profile lawsuit against Elon Musk, the self-proclaimed Dogefather, as well as Tesla and SpaceX.

The lawsuit, aptly titled Johnson v Musk, seeks $258 billion in punitive damages from Musk and the companies he controls. Interestingly, these damages are roughly equal to Musk’s entire net worth. 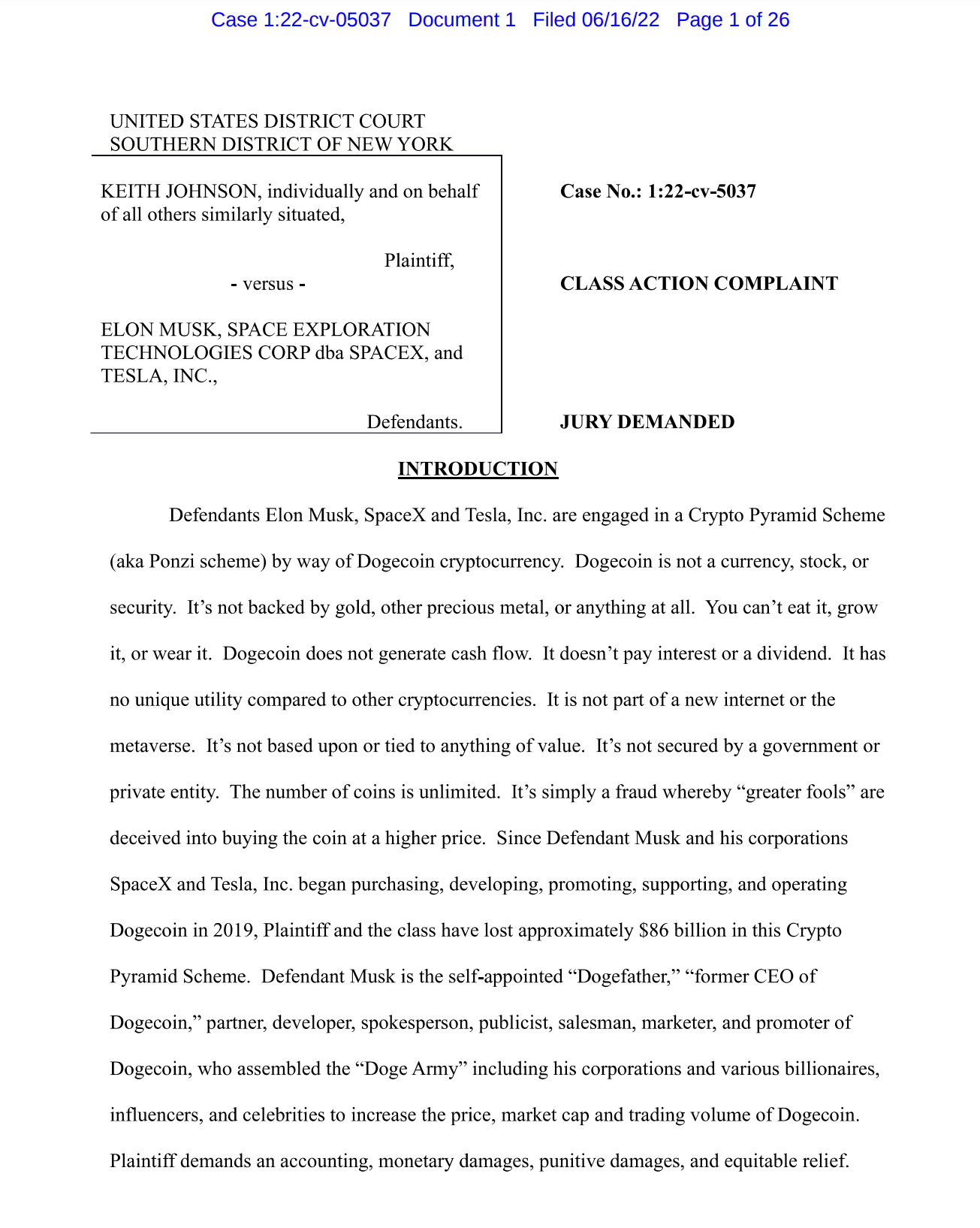 For the uninitiated, Dogecoin is merge-mined with Litecoin using AuxPoW or Auxiliary Proof-of-Work, where one blockchain trusts and accepts the work done on another blockchain. Litecoin already has a strong Proof-of-Work mining framework. Consequently, the fact that Dogecoin is able to seamlessly leverage this framework is a bullish factor. However, Dogecoin’s utility is nullified by the fact that an unlimited number of coins can be mined, thereby allowing for runaway inflation where a supply cascade can quickly erode DOGE’s buying power. Interestingly, Dogecoin can process 70 transactions per second. However, under real-world conditions, the project is only able to process around 40 transactions per second. This is, of course, faster than what Bitcoin can do (excluding the Bitcoin Lightning Network) but significantly slower than the expected throughput of Ethereum 2.0 at 100,000 transactions per second.

This brings us to the crux of the matter. The litigant Johnson has alleged that Musk ran a “pyramid scheme” in relation to Dogecoin, recruiting his sizable social media heft and the financial prowess of Tesla and SpaceX to aid him in this endeavor.

Prima facie, this indeed appears to be the case. For instance, over the past few months, Musk has employed a variety of tactics to endorse Dogecoin, ranging from changing his Twitter profile picture to one that showcases a DOGE-related meme to tweeting DOGE-supporting policies such as Tesla’s acceptance of the meme coin as a valid payment method for merchandise on its official website. Recently, Musk even exhorted McDonald’s to start accepting Dogecoin, offering the inducement to consume a Happy Meal on live TV.

As most of our readers would know, Dogecoin had formed a new all-time high in the runup to Musk’s Saturday Night Live appearance, only to tank thereafter when Musk termed the cryptocurrency a “hustle”. Amid the ongoing crypto carnage, Dogecoin’s price has tumbled by nearly 67 percent so far this year.

As is evident, the legal bar under this definition is quite high. After all, Musk never explicitly promised any consideration to new Dogecoin investors, all of whom jumped in to take advantage of the cryptocurrency’s rally on the premise that Musk’s star power was sufficient to overcome Dogecoin’s inherent flaws.

Similarly, Pennsylvania defines a pyramid scheme under its Unfair Trade Practices and Consumer Protection Law as one where:

Here again, the flaw in the plaintiff’s argument arises from the fact that Musk never offered any consideration via promises of high future returns. While he did exhort McDonald’s to accept Dogecoin as a payment mode, no explicit consideration was offered to Dogecoin investors in return.

The court is, of course, free to interpret Musk’s actions. However, the legal bar to prove a “pyramid scheme” is likely to remain prohibitively higher. The plaintiff would have had a much better chance of success by alleging a pump and dump scheme.

And the creator of Dogecoin seems to agree with the apparent frivolousness of this lawsuit:

i mean dogecoin is the same as everything else, they wanna make all crypto into gambling?

the lawsuit is obviously stupid as fuck, but i don’t think crypto trading is much different than gambling

Do you think this lawsuit against Musk by a Dogecoin investor will succeed? Let us know your thoughts in the comments section below.